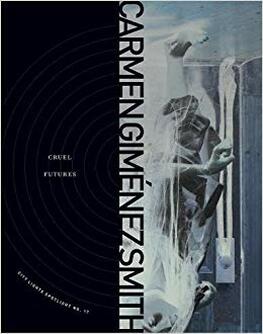 Every time I sit down to write a review I try to give myself a little timestamp about where I am and what it’s like to be in America, now, reading a book of poetry. At the moment, it feels like I’m chronicling a descent. And a perfect book for descent is Carmen Giménez Smith’s Cruel Futures (City Lights Books, 2018.)

Initially, to be honest, I was confused and unsatisfied by the tone of this collection. There isn’t much passion, I thought, and not many handholds for the mind. Look at the closing lines from “As Body:"

… I’d like
to begin loading this heteroglossia
with more brutality, but I keep finding
a new pith: make it even realer.
The self wants to be unburdened
of her bulges. if only I wrote
about robots, and if only
my schooling had been more useful,
but I don’t give a shit about robots.
Instead I’m still caught up
with the lyric, that working class
bauble anyone can foment.

The directness, the unornamented language which still neglects narrative in favor of a kind of abstraction, did not feel lyric enough to me. How were these, as Hoa Nguyen says on the back cover “declamatory anthems to no nation?” Why did they feel so small and dry?

I forget how to review books basically every time I do it. The editor at Muzzle boosts me onto her shoulders to finish every review. I forget how to review it because I lose sight of whether poetry is necessary. Sometimes, I know it is, and at other times I think that poetry is not the agent by which change enters the world. At the same time, if I do believe poetry is necessary, I have to believe in the necessity of almost every voice. The mechanism of art, the way that art slips me for a moment into someone else’s skin – that should be almost universally valuable, shouldn’t it? So how is critique or review or opinion ever useful? It’s hard to admit to this feeling, as a writer and lover of poetry and a reviewer: This is a book with moments of charm and its own evident intelligence and values, that I nonetheless only fleetingly and effortfully liked.

I came back to the book several times, at first more from a perceived duty to be a fair reviewer than out of my innate readerly desire. And eventually, a different kind of satisfaction emerged. The satisfaction is a kind of bemusement. The speaker of these poems is at times a mother, at times a daughter, at times unmoored from any discernible relationship. The voice is sometimes fragmented and floating, at other times decidedly ordinary and concrete.  The speaker seems unbothered by this fluidity, and never particularly concerned with explaining themselves for the reader. In “Of Property,” for example, we enter into a random-seeming catalog of detritus, eventually arriving at:

This book is full of moments like this, that resist resolution, resist the obvious. It is surprising how surprising that was, how bluntly feminist and unusual. Smith challenges an assumption that I am barely aware of, most of the time, that a poem has to offer a recognizable event or feeling, in order to be complete. This kind of fidelity to one’s own vision is rare.

Another thread in the manuscript is the speaker witnessing their mother descend into dementia. This, too, feels like a startlingly unexplored and unexplorable area. We have a strong cultural aversion to mortality and aging, let alone cognitive decline. So it is again a subtly startling courage to have a poem in this collection entitled “Dementia As About Me,” or to have in another poem (“Dementia Elegy”) the beautiful ending lines:

… Her decline is the house
on Field Court where moths got trapped in light
sconces and battered their bodies in hope
until death. I am inside those abandoned
rooms, swimming in pitch.

Though most of Smith’s work is not explicitly about class, class is inevitably present in the imagery and backdrop. The speaker at one point is floating in a sensory deprivation tank, in Oakland, and class is both unavoidable and not directly addressed as she explores the mechanics of her mind. In the opening lines of the book Smith writes, “When mumblecore / gets eaten by television, / I will understand it better” implying a distance, not an alienation, exactly, but a comfort with consuming culture borne of distance. Spanish enters most prominently in a poem about migraines, the language itself a kind of floating intruder.

Even pieces which do feel very “now,” very American, still have little urgency. For example, in the poem “Television Prevents Me From Seeing the World As it Really Is,” we are given a series of single sentence exclamations (“Violence is more famous than pornography!”) without a build or thesis or cumulative power. Or the poem “First World,” one of the pieces which seems to address Trump fairly directly, which opens, “A president spills golf balls, teeth and duct tape / onto his desk in his video on You Tube, then / pets his lion,” and ends with: “the Secretary of Whatever sucking [the president’s] gelid toes.” It does not feel like the reader or the speaker are active figures in this poem. There is a kind of frustrated passivity even in the witnessing. This quality of witness without dramatic thesis, without even a certainty that any action by the speaker is forthcoming, is very honest, in a way that is hard to achieve. To let that bleakness enter the field of vision without becoming anthemic or polemical in a poem is difficult. It is seductive to have an argument. This is partly borne of fear that when I have no strong declared point of view, I am leaving a reader with no point of connection, and indeed I struggled a lot to connect to this work.  Still, I  appreciate that this book never lied to me.

Some pieces, later in the book, are very clearly marked by this political moment. Even when these poems are very direct, they still defy my emotional understanding. The opening of the poem “Ethos” reads:

Now that I know the strategy is grabbing pussies,

I’m going to start a figurative system around

grabbing pussies, and it’ll contain some of the spite

While in one sense I know exactly what this poem refers to, in another sense I still feel a vast, presumably intentional, emotional distance from the speaker. Perhaps the disorientation I feel reading these poems stems from a contrast between Smith’s frank immediacy and the opaque emotional space the poems live in. I am still not sure if this is a reflection of the speaker’s experience, or if it is something Smith is choosing to do to the reader as an experiment.

The speaker seems to enjoy themselves in poems like “Liberate Me,” in which the speaker is talking about their belly: “My belly’s post-capitalist gurgles. I stroke it at night. I made this, I whisper. My belly sets the room on fire, rhetorically.” This, too, feels deceptively transgressive, to include these moments of physicalized pleasure in a collection where the overall mood is quite alienated.

I have been thinking a lot about art, about fulfilling or subverting audience expectations as an artist. But the options are not just to fulfill or subvert—it is also possible to ignore the expectations entirely. This resistance against constructed, expected meaning is a powerful and deeply subversive stance, which Smith takes repeatedly in this collection. That is what I enjoy about this book, when I enjoy it. It feels like watching performance art where a person is just living in their apartment. It feels like I’m watching someone who is alone, or at least, someone who really doesn’t care much about my gaze. Smith is moving through her world and her poetic practice whether we follow her or not, as in the unpredictable movements between “public” and “private” concerns in the closing stanza of “Egotistical Sublime:”
​
My stunted yet singular
intellect pushes
against the emperor’s
slop. I southern
​mise en scene.
Grandmother told me
I’d be a guitar, but
she just wanted
​to pluck me.