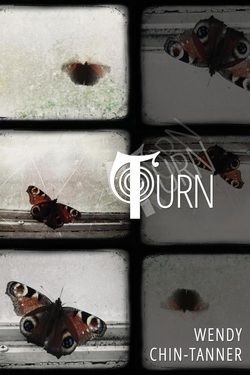 In the collection’s first poem “Tempest,” rich with haunting details of childhood memories, Chin-Tanner writes: “It’s easier to remember these details—to no longer/ feel the night gaping outside the window.” Many of the poems seem driven by this impulse: the desire to re-tell the past, driven by images and vivid descriptions, while maintaining a narrative distance. Obscurity—achieved through frequent (and sometimes confusing) use of pronouns and destabilizing line breaks— creates a parallel narrative of forgetfulness, the unwillingness/tentativeness to speak the past. “I Cannot Say” explicitly renders the experience of speechlessness, from the perspective of a perpetrator who has lost his mind and the speaker:

When they took me home
after the long work day, I could no longer
be with them in the same way.

When he hurled that cheap
vase across the room,
he could not say
why.

There is an empathy and surrender in these sparse lines, a nakedness that reveals how the story of trauma is never concrete. Memory is fluid and shifting, residing in our bodies rather than intellect.

As the collection progresses, the language becomes more precise and clear. The earlier poems represent a speaker who has not yet claimed her body and self.  In the poems marked by puberty and sexuality, there is a willfulness and ferocity that surges from the page: the act of forging one’s identity through language. I find both voices necessary, creating a nuanced, textured collection. Yet I am grateful for the speaker that emerges, such as in “Mother” which possesses a directness that is almost clinical.

Mother clutched the pink diagram,
a miniature woman cross-sectioned,
as she watched my performance
and then tried to help me maneuver
the dry wad into my imperforate insides.


What appears to be a straightforward description is made ominous with adjectives like “cross-sectioned,” and “imperforate.” Later in the poem when the speaker describes giving birth, the diction becomes more visceral yet maintains a controlled pacing of detail:

And afterwards I did not want her
to see me slack-bellied, bleeding week
after week into the coarse cotton pads.

There is an intimacy to these images that places us in the middle of the speaker’s life as voyeurs and members of an inner circle.  Rarely editorializing, Chin-Tanner writes the body with a blunt candidness, a raw, compassionate, ruthless gaze.

The persona poems in the collection echo and contextualize the family narrative within larger issues of gender and sexuality. “Magnolia (Hua Mulan)” and “Joan” each explore the identities of women whose stories have been diluted/appropriated throughout history. The language in each is compelling, lush and sensual against the backdrop of war, such as in “Magnolia”:

there was nothing but soldiers marching

an army of ants in the undulant grass
moving forward relentlessly

under the perfectly curved sky.

Each narrative takes a dramatic turn at the end of the poem: Mulan returns home rather than accepting the offered role of emperor’s concubine; Joan of Arc prays for the soul of her executioner. These turns foreshadow the collection’s narrative arc: the speaker must reckon with the consequences of birth and motherhood.

were in the frigid air a poinsettia blooming,
simple and naked, big body laid atop

sheets, heat broken. It was winter.

Told with matter-of-fact precision, there is a fecundity and lushness pulsing in the bare lyric, like the poinsettia blooming. This is where I admire Chin-Tanner most: romantic, sensual lyricism moderated by a knowing, understated tone. In moments like “Fucking madly behind the blinds,” she is setting up the metaphor, creating an honest, naked frame where a single flourish can bloom. The voice is self-possessed, capable of bewilderment as well as jadedness.

In “Veteran,” a poem about birth and making love soon after, nothing is rendered precious or sacred and yet the pitch of passion that comes in winding syntax and torrential images feels utterly real, urgent and verging on the spiritual.

When our bodies parted, it was without
violence. She slid from me like a sloop

on the crest of that final might wave,
the surge sucking her backwards before

open shore and mine reaching down
to receive her, meet her, round bright

bud of us combined...

If the poem were to end here it would be an incredible glimpse into the other-worldliness of the speaker’s experience. And yet Chin-Tanner pushes the poem forward, guiding the momentum towards these starting lines:

…so that when I came that first

time after the birth, the hot pink lily
that was left and buried in the dirt

unfurled as we fucked, such hunger, such thirst.

Counterpoint and surprise are at work in nearly every poem, creating a powerful sequence that builds and recedes. The third section winds back to family narratives, placing poems about motherhood and reconciliation with her own parents side by side: a reckoning and a release that spills into the final poems. The language remains grounded in the stark and violent images of the body while exploring the tenderness and ache of new motherhood, such as in “Saying Yes” where after remembering the “pain of you sacrum and pubic bone yawning wide/ open like a rusted gate the would not close,” the speaker holds her daughter who asks “Mama? Are you happy?”

The answer to this question, embedded in the flesh and bones of the book, will haunt us long after finishing the collection. Similarly, the world Chin-Tanner so evocatively forged— desire tempered with patience and resignation— left me excited for her future poems. I found Turn to be a compelling, refreshing collection, offering a new language for the worlds of motherhood and sexuality. However, I imagine that Chin-Tanner’s best work lies ahead of her as she refines her technique and takes more risks in terms of form and style. I look forward to seeing the ways she will push lyric against limitations, the wilderness and passion clanging as it all falls beautifully apart:

We are not afraid
even when lightning strikes
so close that the concrete
quivers beneath our feet;
we are stomping
and singing
a nonsense song.

we are shivering
in the August rain.