Horse in the Dark by Vievee Francis
Review by Lindsay Miller, Book Reviewer 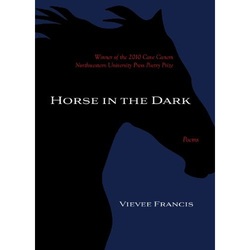 Horse in the Dark, Vievee Francis's second collection of poems, ventures into autobiography, excavating the past with an eye for texture and color. This is a book of green and yellow, black and brown: the hues of a sun-scorched plain, the air heavy, the heat overwhelming. The poems in Horse in the Dark explore the landscape of childhood, infusing pastoral rumination with insights on gender, race, class, nostalgia, violence, and growing up.

The childhood rendered in Horse in the Dark is gorgeously precise. This is no romantic idyll, no rose-tinted generalization of “youth.” The narrative is rooted in the images and epiphanies unique to the speaker's experience growing up black and female in rural Texas. “There is sweetness, oh yes, there is, like a thin pistil of honeysuckle / gone almost as soon as it's sucked,” she writes, and immediately we are transported into nectar and delight. Deceptively simple, childish yet profound, the poems explore the simple bodily grace of running and eating, muscle and skin. Francis reminds us how sweet it can be “to wake with longing and walk / shoeless through the grass.”

Francis writes with a sense of history, a commitment to ancestors and their mythologies. Many of the poems in Horse in the Dark are populated with parents, uncles, and grandparents, often associated with food: fried chicken or peaches. “Daddy slaughtered the hog right there in the side yard, / and it hurt to see it, but that won't stop me from eating,” she writes in “Sugar and Brine: Ella's Understanding.” Here, nostalgia can be nourishing, as well as brutal. In “How Easily Memory is Colored,” Francis uses a striking image of childhood – a crayon drawing of a house – to unfold this theme. “Ask her what happened – she will draw this house,” she writes. The inextricability of event from location, of trauma from place, is a driving force. In describing where she grew up, the speaker cannot help but reveal the events that shaped her.

One particular trauma haunting these pages is the specter of a crashed school bus, the details of the accident are unknown. The bus sits in the middle of a field and the speaker's third grade class is forced to walk past and look at the wreckage. Perhaps for the first time, the speaker comes to understand how something that appears sturdy can become twisted and broken. Syntax fragments echo the child's fragmenting belief in immortality, as the bus becomes “a sun of my own  Dark center of a bright universe.” Everywhere we see the speaker begin to absorb crucial lessons of destruction, vulnerability and empathy: “I felt my teeth on a window – / that was not my mouth –”

In Horse in the Dark, empathy is essential to belonging to a place. In order to tell the story of her hometown (and herself), Francis’ speaker must absorb the histories of its dead. In “Before Crushing the Heads of Her Sleeping Boys She Heard The Breeze A-Whispering,” a woman speaks from the precipice of desperation and madness. “There's no one coming home tonight / I recite the Psalms as I wring my braids.” This kind of loneliness writes itself into the landscape so deeply that it becomes a part of the map, something the speaker must face if she is to stay. To look away from such ugliness is to be exiled.

The bitter realization hits even closer to home in “Say It, Say It Any Way You Can,” in which a destructive cycle breaks open to the touch.  “...the way truth comes out when it's been held too long / to your chest in a boy's cries            a boy who will grow / into his father's shoes.” In broken cadence, the speaker describes watching her uncle beat her aunt, a woman who “could shoot      but didn't.” The speaker understands that telling this painful story is a necessary step but not a redemptive one. The violence continues to echo, repeating itself in fractal patterns. It is in the air and in the blood. It is inescapable.

Horse in the Dark is full of animals – horses, mules, snakes, hares and turtles; not exotic creatures but familiar, homely beasts.  The feeling of these poems against the skin is something like dust on fur. Their magic lies in their ability to take the ordinary and turn it mythical and strange. “God, beast, or fowl; webbed or hoofed, / what foot moves our own shoe?” Francis asks in “Transfiguration.”

Horse in the Dark returns again and again to this theme, describing human/animal hybrids and unimaginable skeletal structures. In “Of Centauromachy,” Francis ponders the impossibility of such a creature: “So, how to halve it, parse haunches / from the equally hirsute flesh that hides / Adam's ribs and a mount's heart?” What makes us human, she seems to be asking, plaintive as the child she so adeptly invokes, and how do we separate what is us from what is earth? In the title poem, a girl who believes she has become one with her horse is thrown – an accident, a failed leap, a splitting down the center. “Two legs took my four,” she says, rising, turned back into a human. “And I, freed of my horse-self / who lay dead to the world, / ran through the clover.”

This sensation of falling, of breaking apart, resonates throughout Horse in the Dark. “Searching / for trouble with a long stick / and burlap, / things will come up on you / quick-like,” writes Francis in “The Plain of Sudden Circumstance,” conjuring a multitude of overlapping images:  childhood mischief, hidden danger, the sudden jolt up the spine from stumbling into a hole you didn't see. Even the most familiar road can take an unexpected plunge. And even the tamest animal can turn violent in hunger.  “Sugar / from your palm?  No.  Give me your fingers,” as the eponymous horse demands in “Smoke Under the Bale.” In Francis’ world, you come to expect the painful, yet it doesn't stop you from loving what you love.  Ultimately, Horse in the Dark is about honoring the past, treasuring it even while carrying its scars.