What Is Left
by Simon Shieh

One summer, we cleaned his backyard pool
at dusk. He pulled sumac branches from the water’s
surface as I held a black garbage bag open
beside him. The branches floated
on the water like bones
arranged in an open casket.

What, if anything, has changed? Luck,
hope, accident. Disbelief, only the imperfect
afterlife of belief. The same question asked
twice.

When I tied the ends of the garbage bag
closed, the sharp branches struggled
against the black plastic.

How much of me did he take and how much
did I give him?

The bag shook in my hands.
It was like catching a ghost
escaping from my body.

Years later, walking past his house
in a thunderstorm, a nosebleed takes me

by surprise. Head thrown back, blood flows
down my neck. How

did he know?
A drop of blood falls

into a puddle at my feet
and slowly forms

mouth. Look
I am braver now. 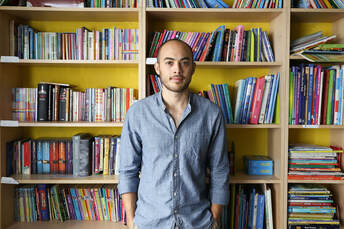 ​Simon Shieh is a poet and educator living in Beijing. He is the Editor-in-Chief of the Spittoon Literary Magazine, which translates and publishes the best new Chinese writers into English. Simon’s work appears or is forthcoming in Tupelo Quarterly, Spillway, Grist, The Journal, Passages North, and BOOTH, among other publications.
Read More...
Summer 2019