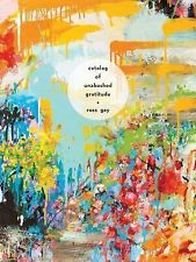 So I’m riding the subway, and I think, “I’ll read some poems – that’ll be nice. I do that all the time.” And I take out my copy of Catalog of Unabashed Gratitude and by the end of the first poem, “To the Fig Tree on 9th and Christian,” I have actual, wet-ass tears coming down my face. Which is unlike me. The movement of the slender, 6-page poem follows the speaker down an urban sidewalk where he notices a fig tree along with other passers-by, and they begin to eat until they are

gleeful eating out of each other’s hands
on Christian St.
in Philadelphia a city like most
which has murdered its own
people

And why, really, does this reduce me to unmanly weeping on the Q train? When vivid accounts of personal misery and war and injustice have moved me, sure, but not lately made me cry by any means? I don’t pretend to fully understand the technology that Gay has developed, here. But it destroyed me, over the course of this book, over and over again.

This is Gay’s third poetry collection. You know when someone makes a sequel to a movie you love? That uptight apprehension that it won’t hold up? I was SCARED to read this book, because his last effort, Bringing the Shovel Down, is my favorite book of contemporary poems. I loved the puzzle-box interior structure of the way the pieces worked together, but even more than that, I loved Shovel’s ruthlessness. And now “gratitude” as a titular theme? Oh man. What if he’s gone full metal Mary Oliver on me? What if it’s toothless and I’m bored? Cut to me on the train in stunned and tearful silence.

My second flurry of tears came just 4 pages later, at a poem entitled “Burial” about the speaker interring their father’s ashes at the roots of a plum tree, so that his father permeates the tree, its leaves and bark, his father pressing his face to the inside of the plum’s skin like a cathedral window, until biting into the plum brings from the speaker a feeling of:

hundreds of hot air balloons
filling the sky in my chest, replacing his intubated body
listing like a boat keel side up, replacing
the steady stream of water from the one eye
which his brother wiped before removing the tube,
keeping his hand on the forehead
until the last wind in his body wandered off,
while my brother wailed like an animal
and my mother said, weeping, it’s ok,
it’s ok, you can go honey,
at all of which my father
guffawed by kicking from the first bite
buckets of juice down my chin,
….
almost dancing now in the plum,
in the tree, the way he did as a person
….
when he knew he could make you happy
just by being a little silly
and sweet.

I see in “Burial” something incredible, something more moving, really, that I have read in the seven thousand other poems about scattering ashes, or even in the particular handful of poems about feeding ashes to trees: there is a feeling here that nature and human life redeem each other, not (as in what are often boring or lifeless pastoral poems) as an aesthetic backdrop, but as a force. The individual human deaths eulogized and anticipated in the work are part of nature, part of this vast tapestry. It is not malevolent, but it is not safe.

Nature arrives in this imperative, personal way several times, in Gay’s work. This is related, for me, to ideas of “deep ecology” and “ecofeminism” and other things I read books about but rarely mention because I think that probably it will keep me from ever getting a date. But it is nonetheless, I think, true, that it is not a natural world out there with amber waves of grain, red in tooth and claw, and so on, as a separate entity from the world of concrete and twitter and racism and people living and dying. And in fact, the denial of these larger forces as somehow “not relevant” or “not political” is a denial that humans are animals, a refutation of science.  For example, the titular poem,  which as you would imagine is full of thanks, listing off he activities of cultivating a community orchard, and keeping bees, “and thank you /  for not taking my pal when the engine of his mind / dragged him to swig fistfuls of Xanax,” then into basketball, to love, to blackberries, and back out to humanity again.

The speaker of these poems is INTIMATE with nature, biting into an ant-eaten fig, tasting the mulberry sweetness in the birdshit that splatters into his mouth. This is another of Gay’s great geniuses: the contrast that heightens and vivifies both the heartbreak and the delight of his subject. The father is not mourned in doleful tones, he is seen dancing through a plum that stains the speaker’s shirt with it’s overabundant juices. And for that, the loss of the father is felt more, not less, even as it is rendered endurable by joy.

This power of contrast – the beautiful language and the brutal thing it describes, the cruelty of humans and the near-unbearable bounty of the natural world, has been present across all three of Gay’s books, but the emphasis has shifted. Where Shovel was a dark, jagged body of work with an undertow of beauty that kept you reading, Catalog is a luminous feast that you enjoy more profoundly because of the tone of loss and impermanence that threads through it.

There are some other stylistic shifts across the books – I am not sure if they are connected to this change of tone. Some of the poems in Catalog have a frolicsome quality, as though you were watching the real-time movements of a mind, like in “Sharing With the Ants”:

of course your mind
goes there
loosey goose that you are
me too!         me too!
...
some entymologic metaphor
the chronic yoke
in love making
not only of body to body
but of life to death

There's also a similar associative logic in the very funny "To the Mistake,” which reminds me of Bob Hicok or Frank O'Hara (whereas in his previous books, the motion of the poems was heavy and deliberate).

Let me end at the beginning. Why did I cry so much at this book? Here is the whole ending of that first poem I mentioned, about the fig tree:

gleeful eating out of each other’s hands
on Christian St.
in Philadelphia a city like most
which has murdered its own
people
this is true
we are feeding each other
from a tree
at the corner of Christian and 9th
strangers maybe
never again.

In acknowledging nature, the relationship of person and place, Gay conveys that there is a belonging – to the planet, to each other – that is our birthright.  In his voice, this is not some new-age frippery, but a livable fact. It is not even meant to be redemptive, since there is no indication that anyone will be spared or saved. It is merely true. It does not say that here is no violence, no loss, no human evil, it only demands that the reader expand their frame to include, also, the irrefutable, impermanent, glorious beauties of our world. It forces the reader to acknowledge that there is something worth having, something to lose.

And that makes me cry on the Q train. And want to be alive.