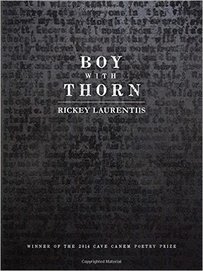 In the closing lines of “Conditions for a Southern Gothic,” the opening poem of Boy with Thorn (University of Pittsburgh Press, 2015), winner of the 2014 Cave Canem Poetry Prize, Rickey Laurentiis writes: “Who among us was made to scratch myth? Speak. / If God made us in his image, it was the first failure of the imagination” (17-18). It is with prophetic question and answer that the writer ushers us into his world, one that is abundant in both myth and imagination. Laurentiis has taken on the audacious task of bringing his reader’s eyes closer to the lives of people who have suffered than writers often dare: Ugandan and Nigerian men killed for loving other men, the ghosts of black men lynched in the American South, and even the mythologized and scrutinized life of Emmett Till.

Laurentiis’s speakers descend into darkness in order to tell of the suffering they’ve seen. In “Vanitas with Negro Boy,” an ekphrastic poem inspired by the David Bailly painting of the same name, Laurentiis writes his way into, and against, the mythological authority of canonized art: “This is my painting, my version of the Dutch / stilleven. I’m trying to write obsession / into it, and can. Open your eyes. Don’t run” (18-20). Laurentiis’s speaker interrupts the all-too-common image of a black boy, or man, shown through European eyes by inserting himself within the confines of the seventeenth century Dutch painter’s canvas and then reimagining it. By addressing the reader directly, Laurentiis strives to create a common place of questioning. He wants us to be active, to look on with his speaker. Later, he asks: “Why trust the Old Masters? Old / Masters, never trust me” (24-25), thereby putting himself on a level playing field with Bailly and the other “Old Masters” (24), and creating space to question why value is ascribed to some artists—some lives—over others.

Laurentiis gives us greater insight into his speakers’ investigative, introspective minds in  “Of the Leaves That Have Fallen,” a long-form, sectional poem that centers the book. At the heart of the poem is the experience of the speaker looking at photos—and into the lives—of black men who were lynched: “I sing, I grieve in it, I dream what haunts each night: / These bodies, even lynched, are still thinking” (1.2-4). Laurentiis’s speaker believes in the mind’s ability to exist beyond the death of the body—whether he means ghosts or a collective unconscious is unclear.

What is clear is the speaker’s obsession with the literal and metaphorical darkness that surrounds the lives and deaths of lynched men: “To navigate the dark you must listen, you must listen / To the dark: the wind, a wind in the trees, the birds, / Birds shaping a sound around the green busyness in the trees” (2.1-3). Sound is at the center of these lines and it shows Laurentiis’s talent for turning language back on itself until it miraculously arrives at someplace new. Laurentiis repeats words such as “dark,” “wind,” “trees,” and “birds” in changing context until he arrives at the “green busyness in the trees”: the site of the lynching. The effortlessness with which his language moves made me feel as if I had walked through the darkness to arrive at the trees myself—a haunting and powerful experience. Later in the poem, Laurentiis writes:

The trees are seeking something more than blood
To shine with. A street has now been likened
To a tree. What number of hands, together, can wash it clear?
But my hands move to bring that color closer to your lips. (50.1-4)

Laurentiis inscribes repetitions into the reader’s mind and then deconstructs them as if slowly pulling sutures from a wound. The trees he writes of earlier in the poem transform into a street alight with blood and then into hands washing it clear. On their own, these images are stunning, but they hold more than beauty. Laurentiis asks us to be more than onlookers, more than the men, women, and children who might have watched a man strung up from a tree; he wants to bring the color of the blood so close to our lips that we will speak of it, too. This, it seems, is the only way to truly to wash anything—history, society, and our own consciences—clear.

Yet Laurentiis’s poetry avoids the pitfall of preaching; his poems do not look outward without also looking within. In “This Pair This Marriage of Two” he writes:

A problem child Whiten yourself
Straighten

As a speaker, Laurentiis questions the way his blackness and queerness are seen by himself and others, and the role that colonialism plays in constructing those images. But Laurentiis is not content to rest there. His avowal of experience draws the reader in, but his ability to question that experience in surprising ways is what made me question my own experiences past the margins of the page. The poem continues:

Fact that I can at all be

The obsession that Laurentiis mentions in “Vanitas with Negro Boy” resurfaces in “This Pair This Marriage of Two” as a fixation with the reflection of the self. But just because this obsession focuses on the self does not mean it is self-involved; Laurentiis’s looks within with the same inquisitive eyes that he uses to look within the lives of others. By doing so, he helps reveal how it feels to see and be seen, to know oneself more intimately, more honestly through self-reflection.

In “Boy with Thorn,” the last, and title, poem of the collection, Laurentiis continues his self-reflexive style, exploring the process of making meaning, even beauty, out of pain. In many ways, the poem is a reflection on—even an Ars Poetica for—the poems that precede it. Like a number of the poems in the collection, it is ekphrastic, taking a piece of art—this time the 1st Century BC sculpture of a boy picking a thorn from his foot—as its foundation:

I told him the thorn was a key,
his body a lock.

By speaking of himself in the third person Laurentiis invites the reader into his active thoughts—a vulnerable and transformative space that reflects how arduous the writing process must be for a poet focused on simultaneously writing into his own mind and the minds of the dead.

Laurentiis, and his speakers, demonstrate fearlessness in looking into, and speaking of, inhumanities that many of us would rather run away from. When we think of transformation it is often private, self-contained: a prayer is cupped between two hands; a caterpillar forms a chrysalis around itself and suddenly emerges as a butterfly. Yet Laurentiis believes transformation can be public and that poetry—in particular, the lyric—is the vehicle to turn a thorn into a key. If a lynching—or any other atrocity—exists as a public event, why shouldn’t a song for the dead? It seems Laurentiis writes because he knows he must use his voice against so much violence, and he wants us to use our voices, too.