When My Brother Wan an Aztec by Natalie Diaz
A Review by Corrina Bain, Book Reviewer 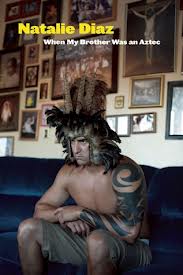 Reading poetry allows me to be inside someone else’s head. Although this can be strange and disorienting, I am often led into an interior remarkably like my own. I have heard this described as the specific telling the universal. The glory of this is that the specific does not have to be, at all, my specific. The detailed, personal, exacting poems in Natalie Diaz’s first book, When My Brother Was an Aztec (Copper Canyon 2012), achieve this beautifully. They draw the reader close enough to tell us our own story. Diaz’s work is searingly human, allowing the reader to enter into the grit and weft of having no food in the house but commodity raisins, or wearing a castoff white kid’s Tonto costume at Halloween. These events are relatable in a way that “poverty and Native American experience” is not. This is what poetry offers which I most self-servingly cherish: the assurance that our interiors, our human feelings, are both communicable and shared.

Trusting that shared humanity will emerge from poetry requires courage. Fortunately, it is a courage Diaz has. Addressing difficult thematic material (poverty, addiction, troubled family dynamics) from a culturally specific vantage point presents a risk of relegating the speaker’s ethnocultural group to victim status. Writers with strong, difficult, culturally informed narratives who express ambivalence, like Maxine Hong Kingston, are often accused of voicing their internalized oppression, or deriding their own culture. However, I do not think this criticism holds much value. Ambivalence about one’s own cultural group is a part of authentic witnessing. Knowing about the internal lives of other kinds of people is critical to understanding other people as human. And to tidy up one’s own culture for mass consumption keeps that culture a two-dimensional entity, a caricature.

Diaz’s level gaze captures the realities of inherited oppression in reservation life in straightforwardly narrative poems like “A Woman With No Legs” and “Reservation Mary.” She expands into a more lyrical address of culture in poems like “Other Small Thundering” (“Others lay where they first fell, enamored by the warmth / of a blanket of blood. / My dress is bluer than a sky weeping bones— / so this is the way to build a flag— / with a pretty little Springfield .45 caliber rifle”). This same admixture of reporting and a more magical perspective is applied to her family, including the difficult brother who is the cornerstone of the collection.

Oddly, the uncompromising address which serves Diaz so well in poems about her family and community seems to dissipate in the more romantic poems. The images in the romantic poems are often powerful (“My mouth is on your thigh— / I would die to tear just this piece of you away, / to empty your bright dress onto the floor, / as the bombs’ long, shadowy legs, march me toward the amaranth gates of the city”).  Yet, the concrete, explicit voice which emerges around family violence and community suffering never arrives in the love poems. The beloved does not feel specific.

There is an unevenness of both voice and intention across the collection, typical of a first collection. However the effect is mostly pleasant and exciting. Image driven poems like “Cloud Watching” (“Betsy Ross needled hot stars to Mr. Washington’s bedspread— / they weren’t hers to give. So, when the cavalry came, / we ate their horses. Then, unfortunately, our bellies were filled / with bullet holes”) and “Dome Riddle” sit well alongside the more narrative pieces. The poems about the speaker’s family range from the myth- and fantasy-laced title poem to the brutally direct and unornamented “Why I Hate Raisins.” This gives the book a kind of something-for-everyone appeal. There are also some craft elements that far exceed what one expects of a first book. Diaz’s use of space on the page is beautifully considered and mature. A poem speculating about what would emerge if women ruled the world is oriented on the right, and several pieces make use of a cascading motion. The opening of “Love Potion 2012,” for example:

There are a few (really very few) moments of first-book-ish obviousness. In “The Gospel of Guy No Horse,” as the scene in a reservation bar is described with clarity and nuance, suddenly the two white women tourists are tiredly characterized as “bedraggled angels.” This is only jarring because the rest of the poem is so complex. Similarly, in the opening of the title poem, Diaz leans too hard on the strong opening image. The astonishingly good first line of “When My Brother was an Aztec,” “he lived in our basement and sacrificed my parents,” is diluted by the unnecessary following line, “it was awful. Unforgivable,” seeming to belie insecurity.

My other argument with the book may well be personal, but I will raise it nonetheless. The brother character is a major artifact of this book, so it is curious that the personhood of the brother himself feels somewhat hollow to me. Writing about addiction is tricky, and I have seen it done successfully almost exclusively by addicts (Jeff McDaniel and Franz Wright come to mind). While the poems give the speaker’s experience of violation and loss in the face of the brother’s addiction, they mostly leave out his humanity, his motivations, his emotions. Diaz does devote a couple of excellent poems in the final section of the book to contextualizing the brother’s drug addiction as an outcome of his military service.

I cannot say with certainty whether my complaint that the brother seems hollow is an issue with the poems, or an issue with me as a reader and the dissatisfaction is born out of what I am seeking as a recovering addict and addictions worker. It may be unjust to expect the speaker of these poems to be able to fully inhabit the personhood of a brother who is defacing his own humanity. But perhaps my favorite moment in this strong collection is the speaker’s acknowledgment of culpability, joined with her brother, which emerges in the prose poem “Zoology:” “We are a zoo, and we will not spare even our parents the price of admission— they will pay to watch us eat el burro. My father will fall on his knees like a man who has just lost his zebra. My mother will paint the thin gray bars of a cage over her skin and reach out for us.”