The Switching/Yard by Jan Beatty
A Review by Jacob Victorine, Book Reviewer 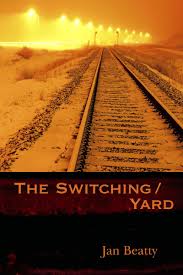 When I first came to poetry about four years ago, I had certain expectations for a collection of poems: mainly, that I should be wowed immediately. This rarely happened, and I wondered why I seldom discovered writers to deeply, passionately love. I mean, there were Walt Whitman and Yusef Komunyakaa, but not too many others. I didn’t yet realize the depth and breadth of contemporary American poetry or how to sift through a physical/virtual wall of books to find an author with whom I’d connect. Most importantly, I didn’t yet know how to read a book of poems, or understand that many collections only give back what a reader is willing to give.

Fast forward to a few weeks ago: me on the train/bus/in my living room reading Jan Beatty’s fourth book, The Switching/Yard (University of Pittsburgh Press, 2013), and not initially loving it. Four years ago I might have set the book aside and forgotten it, or pushed hastily through its pages without giving each poem a chance. I might have wondered how a poet I admire so much had written such a disappointing book.

And I would have been dead wrong.

Luckily, for anyone reading this review, present Jacob is a much wiser and more diligent reader than past Jacob ever was. In fact, over the years, I’ve found that a book I initially struggle with is often the one I get the most from. The Switching/Yard is no different. In her newest and most ambitious collection, Beatty uses the rail yard as a metaphor for the speaker’s identity, switching between the tracks of place, time, gender, and even blood. If Beatty’s book were a train, it would not be an easy one to ride—whether for the frequent shifts in direction or for the dark tunnels it passes through—but it is well worth the journey if you have the dedication and strength to hang on.

The first stop on Beatty’s train is “Visitation at Gogama,” a fevered dream sparked between two slabs of flint: memory and place. In the poem, the speaker conjures her birth father as she approaches Gogama, Ontario: “I tell you this is my family tree—no / noble phrases, no graveyards on the hill, / just visitations” (10-12). She continues, “Now pieces of discarded track, / explosion of purple wildflowers on the side” (12-13). The train triggers the speaker to access a heritage detached from any heirloom, and the “discarded track” (12) is the place where history bleeds into imagination, where any traceable path is lost in wild, flowering fantasy. She envisions her birth father as a young man stepping from a house and staring at her next to a sign bearing his nickname, “WILD BILL” (6), and it’s hard to know if she is remembering an old photo or conjuring his being from thin air.

As the speaker passes Gogama, a town dotted with bars and shops named for what they are, she declares “In this place of no-naming or maybe / first-naming, I decide to call myself ‘bastard’— / it’s plain and accurate, you can count on it” (23-25). For a person such as the speaker, on a journey through her bloodlines, naming becomes an even greater marker of identity, something simple and dependable, unlike her muddled past; it is a way for her to take control, to claim who she is and where she comes from, even if her chosen name is a reminder of what and who she doesn’t have. The poem beckons the reader to ask how much of a person’s identity can be found by looking back and how much must she create for herself?

The interplay of given versus chosen identity continues in “My Mother Was A Dress,” in which Beatty’s speaker imagines her birth mother as a cotton garment: “her neck a blue V/ for her blue vagina that birthed 6 babies” (2-3). This poem may be the best example of Beatty’s uncanny ability to blend concrete with surreal. Midway through its lines, Beatty writes:

We thought that genetics had made us
go to Joseph P. Hornes to buy the V,
but decided we both lived
near the bloodless dept. store. (12-15)

By turning a department store into a metaphor for her speaker’s relationship with her mother, Beatty creates tangible symbols for family and gender. The “V” (13) becomes a metonymic device for femininity, one of the many constructs the speaker fights to break free of throughout the book. The “bloodless dept. store” (15) brings into question the importance of genetics in the context of family; the speaker and her mother later realize blood is not always the tie that binds.

The concept of choice is complicated in the last lines of the poem. By turning her speaker’s mother into a dress, Beatty shows how identity is often a garment to be slipped on and off:

The way the dress hugs my hips
then falls,
just like she said she hugged me once—
before falling away, switching
me out for sale. (24-28)

The poem is at once tragic and empowering: a daughter, given away by her birth mother, coming to terms with her own power of choice. Within the framework of this duality, it is only fitting that the main theme of the book, “switching” (27), reemerges. Just as a train gains a real path and loses a possible one each time it switches from one track to another, Beatty’s speaker gains and loses a mother. These last lines make it clear: life is not merely a matter of choices, but of alternate—taken and discarded—realities.

The poem, “Ghostdaddys” builds on the aforementioned themes of family, abandonment, and gender even within its opening lines: “When I was a girl I was a boy / with black boots and holster and / a basketball hoop in the backyard” (1-3). The speaker’s description of her childhood complicates her identity through the juxtaposition of “girl” and “boy” (3), and the inclusion of stereotypically male objects and activities. The implication is that male/female is not a dichotomy, but a fluid spectrum. The speaker continues: “My reach was endless, I was / birthed in a meteor shower and / all the stars knew my name” (4-6). These lines reflect the freedom of childhood, of not yet knowing the restraints of societal constructs. Here, Beatty’s speaker is ubiquitous and full of light; she has not yet felt the rejection of two fathers, a millionaire and a hockey player, who turn her from a child of the universe into a “wildly surviving thing” (44) feeding on drugs.

Beatty continues to pull images from space throughout the poem, using a star as symbol for the permanence/impermanence of her speaker’s identity. Referencing her first father, the speaker remembers: “I was the small voice asking/ / he was the hammer coming down, / shattering me into shooting stars” (18-20). Unable to find an anchor in the millionaire’s voice, the speaker’s identity becomes fragmented and mutable: nothing more than a streak of light across the sky. And yet, by the end of the poem she finds power in the circumstances that made her, imagining sex between her mother and would-be father as an animal act, violent enough to tear holes in the night:

I hope sex was ravenous,
with cross/checking, slashing/
I hope there were slats of light everywhere
to see my star on the other side. (47-50)

Although the word, “switching” does not surface in these lines, the interplay of light and dark conjures the images of the light switch present in the poem, “Switching,” on the following page. Instead, “slashing” (48) takes its place within the poem, simultaneously mirroring the slashed punctuation, and serving as a metaphor for the speaker’s halved identity: a girl split between two fathers, between knowing and unknowing, between the act of creation and the creation itself. It’s no wonder Beatty’s speaker wishes for her father to see her “star on the other side” (50); she knows there is power in the handing down of identity—whether through knowledge or blood—and she dreams for the daughter’s chance to hand it back.

In “Switching,” a poem reliant on the various definitions of its namesake, Beatty’s speaker comes to own her identity. Although the speaker is both a girl “switched at birth” (2) and a woman “tangled / in her own wires and switches” (15-16), she finally emerges from her uncertain past, no longer switching, but taking both tracks, at once letting go and taking claim:

Father of sky, dreams, and night,
she was a slave to it
until she called herself free,
became her own man. (17-20)

Beatty’s speaker realizes that instead of choosing between, she can choose to be free; instead of being the millionaire or the hockey player’s daughter, the boy or the girl, she can choose to be the stars and the sky. No longer chained to the duality of switches, the speaker becomes “her own man” (20) and “her own father” (22). Beatty knows we cannot escape our past, but she also knows we can choose our future. Through the act of naming, her speaker goes from a bastard defined by who and what she doesn’t have to a woman who defines herself.

In fact, Beatty’s collage of the self is what initially made the collection difficult for me to access. Her constant switching between speakers and settings made me feel, at times, like I was hopping from railcar to railcar. One moment the speaker is tracking her father’s ghost through Canada, and the next she is conversing with poets at the Platte River Whooping Crane Trust in Nebraska. Sometimes she is the writer, Jan Beatty, lamenting the heteronormativity of American poetry; other times she is a daughter trying not to lose herself in the fissures of her fragmented childhood.

This hopping is also what makes the collection so brilliant, and where it departs from Beatty’s previous books. As always, she writes toward trauma, creating speakers who are unashamed of the sex, violence, and heartbreak that often inhabit their lives, but in The Switching/Yard, Beatty travels longer distances between these speakers, and at a faster pace. Maybe it is simply due to the conceit that surrounds the book—the multiple tracks created by the rail yard metaphor—but it seems, with each new collection, Beatty gains a willingness to leap instead of walk.