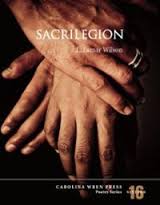 Whatever I knew from having read L. Lamar Wilson’s work in journals or seeing him perform live (I encourage you to do so) nothing prepared me for the way Sacrilegion (Carolina Wren Press 2013) would leave me vulnerable, raw with need to touch, pull, feel the weight of the book leave my hand as I threw it across the room in tears. The feeling I had of being abandoned is testament to the intimacy achieved throughout the collection’s forty poems, whose moments of healing and longing articulate a new sensuality. With fierce, exacting ,lyricism, Wilson creates his own scripture, (re)inventing a faith based on love, mercy, and acceptance, complicated by a relentless and questioning gaze.

Many of the poems in Sacrilegion center around paradoxes at the core of identity and religion: the body, fragile and resilient, broken by what brought it into being; the silences that give birth to meaning; the disbelief that leads us deeper into faith. Wilson shows how many of us cope with these impossible truths by lying to ourselves, yet how one honest statement is all it takes to dismantle a system of mendacity. In “What Did You Do to Yourself?: Finding Fault,” the speaker uses the familiar refrain “Thank you, God” to reveal and celebrate conflicting truths at the core of his life:

I was born & lived to darn
myself a cocoon. I don’t feel a thing
in my left hand in here, but I used
to feel everything else
more than most. God said
let there be irony & there was I:
fighting the doctor’s forceps
on my coming out day. The preacher says
In all things give thanks & I do.
Thank you, God, for this holy bum hand. (11)

Wilson seamlessly occupies opposing tones, sincerity and irony, as he praises what he might resent, allowing the music of the line to synthesize contradiction. There is also a stark frankness in the telling of his genesis, compressed to ten terse lines. Wilson uses the tension of his line breaks to steady and distort our expectations, letting meaning shift through a lyrical narrative. Many other poems stem from a similar friction: the speaker’s emotional limitations pushed to the edge as he disparages and sympathizes with versions of his earlier selves.

The collection is alive with characters; the speaker set against a moving screen of family, lovers, nurses, and historical figures. This constant hum of interaction, crafted as dialogue or description, simulates the experience of searching for reflections of ourselves within others. The father reappears as a complicated figure offering unconditional love while struggling to accept his son. Through the lens of the relationship we see how flippant/surface language can be dismissive as well as healing. In “Woe Unto You, Sons,” the father laughs and says “Learn / to lie, son” when the speaker has been hurt at school by bullies, leaving the speaker even more wounded. This tone is cycled and re-purposed, accruing emotional resonance in later poems such as “Dream Boys”: “We applaud & feign heartened laughter. / My nephew sees beyond the veil shrouding / his father’s eyes.”  Then in “Giving Up the Ghost,” one of the most tender and devastating moments in the book,

…He lets out a long sigh, smiles, then
laughs & places an open palm on my shoulder, then around it
to steady me as we walk to my hospital room. It’s OK, son.
Daddy’s got you, & this ain’t your time to leave here. (61)

We see how language can create or subvert intimacy as we attempt to say the right, honest thing. It also shows how speech is a blueprint for emotional selves, marking the point of arrival (saying what we’ve been trying to understand) and also embodying the path towards self-realization. Lies and truth get mixed up in our journey, equally important in navigating who we are.

As in many of Wilson’s poems, the power comes from subtlety, the terse and blunt self-effacement and direct descriptions. In “It Could Happen to Anyone: A Letter to a Boy,” the speaker is pressed up against his own limitations while interviewing a man for a ‘World AIDS Day story.’

This man doesn’t know the you
who dreamed of kissing the lead tuba player
but was too much of a punk or a saint or both
to follow his leer from dais to bathroom stall.
It could happen to anyone, he says, especially
when you love somebody. Make sure
you write that down. You don’t. Too
sentimental, you think, for a hard
news story, so you dig for the grit, for the who
who branded him untouchable. He smiles,
places one hand on his chest, gropes the table
for yours. You using protection with these boys?
His scaly palm grazes for keloid knuckles.
I haven’t, you know, yet, you mumble, happy
for once to be numb, glad you can’t feel the heat. (10)

The poem explores the way we build walls, switching perspectives to show connection between the two characters. Sonically and visually stunning, Wilson avoids sentimentality while capturing what it means to be humbled in the presence of grace, contained within the restraint of an elegant, stripped-down line.

Wilson’s most gripping poems weave narrative within other texts and historical documents, collapsing time as they shift our gaze to take in multiple truths and experiences. “Resurrection Sunday,” my favorite poem in the collection, exhibits precision and control as we are taken from a present moment of witnessing the past, showing how history is alive and pulsing in every action, every image:

I’m so there. I’m so not there

or here alone. See the boy in overalls: cross-legged
& wedged in the corner between two walls
of books. He stares as Claude Neal’s limp tongue

holds his own limpness on the fading page
of one dusty tome, Claude’s sockets fixed
on some constellation the boy wishes

he could decipher. Claude’s body—chiseled
& mangled—hangs in an oak by a rope. There is nothing
in this body we can desire, & we want.

We want a body, not mangled like ours,
we can love without shame. The boy feels
so small in his body, its scars that beckon

While the connection between watching a pornography video and looking at a picture of a lynching is in itself brutal and affecting, it is the way that Wilson complicates the form that makes the material bleed from the page. As we are directed to look through the speaker’s gaze, our view repeatedly shifts between settings until the man in the photograph becomes the man in the video, the contexts blurred to reveal the ways that body and spirit are violated throughout history. At the end, “Resurrection Sunday” becomes almost a blueprint for the collection, presenting a sensuality and desire for a “different kind of holy, a sacreligion” that allows us to be ourselves, to claim our history and our bodies.

Sacrilegion models, for me, the different modes and possibilities of writing sensuality, how re-writing the body is to rewrite the world. The sensual is not confined to sex, nor is sex always defined by sensuality, and the inversion of tired images and tropes allows for a new language, wide enough to hold our multitudes.

The writing of sensuality becomes even more compelling when set within hostile and/or sterile environments. Many of Wilson’s poems are grounded in the experience of being isolated and moving through the world in search of connection while fighting to protect one’s wholeness and integrity. Healing comes in moments of exchange with strangers, such in “A Patch of Blue in Tennleytown”: “She catches me staring, & I wave / my limp wrist, an SOS.” Or in “A Prayer for the Phlebotomist” where the speaker contrasts the grace of his phlebotomist with the canned, contrived “holiness” of Charlton Heston. The affect is to feel viscerally how we need each other, and how terrifying that is. In the end, the collection is a testament to bravery and decency in a world that wants us to fear our own bodies and each other. Through his vulnerability and clear vision, Wilson celebrates the integrity of looking at the world straight on while also gazing beyond: being rooted in the body and the spirit.

After reading Sacrilegion, the book beating in my hands like a second heart, I felt alive the way I feel after coming into contact with any source of duende: grateful for the intimacy and grace found in the lines and inspired to be clear-eyed and brave in my own writing, as in the final poem, “Ars Poetica: Nov. 7, 2008”: “See. I am not afraid of facing you, or me.”