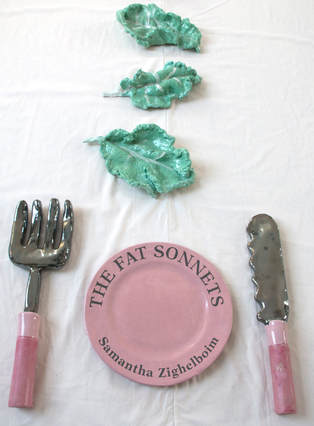 Here are our
shadowbox stomachs,
our hexed
esophagi, here
are our secret
collarbones,
our stretch-
marks.
We offer you
the thin ghosts
we have kept
in us all
our tired years.
Release them.

This first poem announces that the “we” of the book—the collective speaker—will be fat people. Fat people are the “most visible invisibles,” Zighelboim proclaims a few pages later. We are both everywhere and nowhere at once. On the collection’s back sleeve, poet Timothy Donnelly notes that the majority of Americans are fat. We are visible—we are the majority and have larger bodies than thin people—but invisible because fat actors, pop stars, musicians, and online celebrities are scarce. This erasure of the majority of Americans and the fiction that the media creates that fat people don’t exist or, if we do exist, we are a sideshow attraction to the main narrative—is profoundly violent. Nancy Mairs, a writer who had multiple sclerosis, describes the effect that the absence of people with disabilities in film and television has on viewers with disabilities: “Imagine a life in which feasible others . . . don’t exist. At the least you might conclude that there is something queer about you, something ugly or foolish or shameful. In the extreme, you might feel as if you don’t exist at all.” Fat people and people with disabilities both possess bodies that are viewed as monstrous and grotesque by our fatphobic, ableist culture. The terror that the fat body and the disabled body evoke in viewers is both a cause and consequence of our erasure. When Zighelboim opens her book with a speaker who is not only one fat person but many fat people, she loudly and boldly rejects this erasure.

Zighelboim’s book is part of an explosion of literature written by and for fat people. Roxane Gay’s Hunger, a harrowing memoir exploring sexual violence and binge eating; Lindy West’s Shrill, a hilarious collection of essays about the fat female body; and Sarai Walker’s Dietland, a fictional exposé of the absurdities and violence of diet culture have been published in the last few years and have all been bestsellers. In poetry, Aaron Apps, Jennifer Jackson Berry, Hieu Minh Nguyen, to name a few, are writing the fat body. And Fat Studies has emerged as a respected academic discipline. In other words, we are writing ourselves into existence—giving readers the stories they haven’t been seeing in the media and for which they are clearly hungry. Zighelboim’s book has arrived at the beginning of this renaissance of fat literature. In other words, The Fat Sonnets has arrived right on time.

The sonnet’s form abounds with rules—a fourteen-line poem in iambic pentameter with a set rhyme scheme and a turn between the octave (first eight lines) and the sestet (last eight lines) or in the final couplet. Dieting, too, requires an abundance of rules. The speaker’s mother “once . . . was on this diet where she only ate bowls of / sliced strawberries steeped in skim milk, sprinkled / with a single packet of Sweet’N Low.” In “A Sensible Lunch,” the speaker eats “brown rice and a single turkey meatball.” Throughout the book, the speaker notes the rules that she and, occasionally, her mother (who dieted and starved because it is “all she knew to do”) must follow on their quest for thinness. The speaker asks, “What does it feel like to eat and not think / about eating?” The direct style in many of Zighelboim’s poems forces the reader to fully inhabit the body and thoughts of a fat woman while confronting many of the misconceptions about fatness. One of these myths is that fat people do not diet, while thin people often do. Throughout the book, the speaker details the rules she follows; sometimes, she weights 126 pounds; other times, 300 pounds. Some days, she eats “a large pizza in under seven minutes.” After purging the pizza with “a determination unlike anything [she has] been able to employ in [her]/ non-eating life,” she plans to “starve again on Monday.” The great violence of the diet industry is that it knows dieting does not work and yet it repeatedly sells us the lie of dieting. When one restricts calorie consumption, not only will one eventually binge because the body becomes ravenously hungry in an attempt to save itself from starving to death, but the body—trying to prevent future starvation—will drastically slow its metabolism for, on average, 3-5 years. In other words, dieting is not the cure for fatness: it is the cause of fatness. Therefore, the more fat someone is, the more likely they are to have dieted throughout their lives. Like the sonnet, with its abundance of rules, the fat body is a body made by dieting’s rules.  Zighelboim’s sonnets sometimes adhere to the sonnet’s constraints of 14 lines with a discernable rhyme scheme, but just as often, the poems spill beyond fourteen lines like flesh spilling from Spanx or they whittle themselves down to only a few lines like the fat body temporarily starved to thinness.

These thin sonnets—of which there are 19 in total, ranging from only one line to 14 very short lines—pack a large punch:

The only
body in
the entire
world
I will
ever hate
is my own.
​
This poem, like many of what I call the thin sonnets, directly and plainly states what it’s like for the speaker to live in a fat body in a culture that hates her. For the most part, the thin sonnets lack figurative language and artifice, forcing the reader to inhabit the speaker’s mind and voice. Sometimes, the speaker hates her own body. Sometimes, she declares, “If I were you, / I would be afraid / of ending up / like me, / too.”

Zighelboim’s book is a wrenching antidote to the saccharine messages of “self-love” propagated by corporate advertising in its attempt to co-opt body positivity. Body positivity began as a radical movement against the dehumanization of fat, disabled, queer, and Black and Brown bodies, but it has molted into watered-down, neoliberal advertising campaigns that promote so-called “self-love.” To love yourself in a world that constantly commits psychic and physical violence against you is, of course, radical, beautiful, and necessary. However, most of the ad campaigns with plus-size models only feature “acceptable” fat people—able-bodied with an hour-glass figure and often white or light skin. The road to self-love these ads promote is paved with consumption: to truly love yourself, you must buy these products! Readers will feel grateful for Zighelboim’s honest depictions of living in a fat body in our fat-hating culture: it is imagining oneself as monstrous and thinking, “I’m the fattest woman / who ever lived.” It is a “man who tells me that every so often / he likes to fuck chubby girls.” It is having nightmares—“Fat Dream” poems recur throughout the book—that are more trauma flashback than dream. In the first “Fat Dream,” the speaker becomes one of many giant squid whose mouths are sewed up “so we would       stop eating and breathing.” Zighelboim’s speaker reveals the trauma of living in a culture that would rather she die than have more weight than is deemed acceptable by the arbitrary and unscientific Body Mass Index.

The Fat Sonnets, however, not only explores the traumas our fatphobic culture inflicts upon the fat body. The poems have much humor, and readers will likely find themselves laughing out loud throughout the book. For example, in “Pie Hole,” the speaker declares, “I am starving and there are only lettuces left. / The lettuces are toxic. / People say the lettuces are the only path to joy.” The speaker hilariously mocks the so-called “clean eating” dictums that abound in our culture, which imply that the only way to be happy is to be thin, and inverts them: lettuce is not “clean” and healthy; oh no, it’s poisonous!

Fat people will see their stories and lives reflected in this book in ways that they have never seen themselves reflected in literature before. And when I say fat people, I mean everyone. The majority of us are fat, and those who are not know someone who is. Moreover, thin people have also been shaped by the fear and terror of fatness. Of course, this terror dominates in some communities more than others, but everyone in our culture has at least witnessed the widespread fat shaming campaigns propagated by the fashion, dieting, and medical industries. Everyone’s body has fat on it—a human being cannot survive with zero percent body fat. Most have a curdle of cellulite at our thighs, pudge in our hips and belly, even if the BMI would not declare us “overweight” or “obese” (two terms I loathe using as they are laden with the medicalized ways that fat people’s oppression has been justified: the logic is that our bodies are not healthy, so we deserve to be mistreated—despite evidence showing that when a host of factors such as genetics, access to health care, stress, sleep, and yo-yo dieting, are taken into consideration, fatness may not actually cause the health problems medical industries claim it does). In other words, you will likely laugh, cry, sigh, and nod in recognition while reading this book, and once you get to the end—you will rejoice! Also, you may eat an ice cream cone topped with rainbow sprinkles.