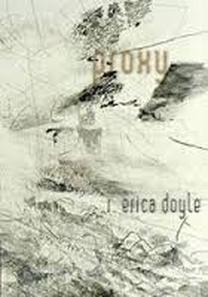 Proxy, R. Erica Doyle’s new collection, is a book of exceptional beauty, passion, and intelligence. Throughout the five long, sectional prose poems, I was surprised at how female sexuality (specifically woman-directed woman’s sexuality) is still transgressive in 2013.  It is a joy to know that, even in this depressing “post-feminist” era, despite the commodification of female sexual desire which camouflages itself as empowerment, there are still artists who can surprise us. Despite a clear literary heritage of contemporary lesbian poets, Doyle’s voice is edgy and unique, as she discovers that there is still more to delineate in the territory of having and desiring a female body: “You are hungry,” Doyle writes. “Each one tastes different. Lavish tongue wherever they push your mouth…. Sometimes you make an offering of yourself. They think they take and you open wide to swallow them whole. // You are not generous.” Another example, from the heartrending specificity of a litany of sexual encounters with women described in palimpsest, where “one cries from her urethra while you suck her clit. / You are dangerous /…/ One’s youth gives beneath your knee, crisp indentations.” The speaker in these poems is ravenous enough to be predatory:

You fuck a lawyer who has never fucked a woman before. ‘Women are so kind,’
says the virgin. ‘Women are sensitive and caring.’ Her hope is a virus. You say
nothing…. You are unceremonious. You disabuse.

This lies beautifully alongside the speaker’s brief, pained meditations on her own body: “The eggs struggle against the membrane and wait to be let out, die and decay there, festering cysts. On the sonogram, your ovaries like asteroids against the tulips of your fallopian tubes.” Although most of the book is about the speaker in relation to others, these lines strike me as Doyle’s most profound gift, in proxy: the relationship between the speaker and her body, a vehicle of desire that is simultaneously female and human.

But to discuss only the sex in proxy is to overlook a dizzying mastery of perspective, which lends the hard-edged intelligence of the speaker’s voice a magical, shadowy quality. The book is anchored by epigrams at the head of each section from Berlinski’s Tour of the Calculus. At the outset, Berlinski says “Under the mathematician’s hands, the world contracts, but it becomes more lucid.” This is a strikingly apt parallel to Doyle’s poetry, where longing, regret, and some brutish physical facts are revealed, but the narrative surrounding them is more or less dissolved. Take this opaque but gorgeous sentence from prologue: “After seven years, the slant of her eyes tilts your beautiful, wavering house, complete with wife and dog, into the chasm behind the curtain.” Or, “You’ve come to do an autopsy and at the first excision found a beating heart.” What I’m pointing out, I guess, is that Doyle is writing POEMS, giving us small crystalline views of interior moments which she trusts readers to relate to their own internal life.

A willingness to trust the reader is one of the mysterious mechanisms of writing poetry. It is so intimately related to beliefs about oneself and the world that is not really fair to call it a craft element, and yet surrendering to the urge to explain oneself to readers in order to control their experience is a common error. It is particularly resonant when writers who have some identity which separates them from a “normal” reader are able to engage in that trust. I am thinking of Lorde’s use of people’s names and places as personal, sometimes entirely opaque symbolic systems, or more whimsically, the sense Frank O’Hara gives in his poems that you are reading notes written to his charming friends. This faith in the reader’s ability is inspiring, in Doyle’s case, especially as it relates to the adjacent personal and political realities of a writer who is a queer woman of color. Without setting out to create a counterpoint to conventional constructions of women’s sexuality, she has done so. Without an intellectual treatise, she has indicated the proximity between American constructions of race and sex:

Negroes make me hungry, too, she says. You need an explanation but say nothing
to this boastful non sequitur. You want to amuse her with your bones.

The navy put microbes on the boots of colored men, to mimic the tracking of
deadly viruses. The chemical warfare heats up. Over dinner with your brother, he
coughs. It sounds like her on the phone, afterwards. Dragging the infestations,
everyone, dragging.

This trust, allowing readers to construct their own meaning from the poems and thereby engaging the reader in the poems’ emotional work, creates a profound magic in the collection. If I have a complaint about this book, it’s that I finished reading it, when I wish I were reading it still.