​Notes on the End of the World by Meghan Privitello
Reviewed by Claudia Cortese, Book Reviewer 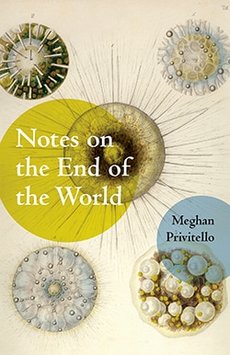 ​Meghan Privitello’s speaker says that Notes on the End of the World is “a modern allegory about guilt and power.” Have you ever imagined the world’s end—the fire, the flames, the furious clinging to everything you hold dear: your poodle, your Lisa Frank Trapper Keeper from 8th grade, your daughter’s skin the second before it burns? It was a balmy 63 degrees in Antarctica the other day. If you think that isn’t natural, you are right. The end has already come for countless plants and animals. Perhaps our apocalypse fantasies reveal, as Privitello notes, our guilt that we have the power to take all we want from this planet. In that same poem, the speaker sighs, “Oh world, end already. // I’m tired of strange men touching my body / and me not saying anything about it.” These lines are so simple and direct they hurt. The speaker is tired of men assaulting her, and she wants to die.

Privitello’s book is a series of notes charting the last 20 days of the world, which actually span 100 years. These notes on the earth’s destruction allude to the Bible’s seven days of Creation, and they spliced me open the way the world is being spliced open. Privitello’s poems are nearly perfect to me. I know perfection is boring, and you’re not supposed to say anything is perfect because what we call perfect gets placed on a pedestal from which it will surely fall. However, by perfect, I mean incredibly sharp and precise: each word like a blade that cuts meat from bone. These lines, for instance, reveal Privitello’s biting humor:

I want to be a dark road.
To say: Nest, your eggs will be crushed and cooked here.

I am no place to settle.

But then one of the pigs begins to look like a man.
When it asks to cross me I don’t know whether to marry it
or cook it.

A pun on the well-known chicken joke, these lines show the speaker wanting to transform into a thing that gets walked over. However, she finds power in her own objectification and imagines men as animals she can fry like bacon—especially if they try to “cross” her. In another poem, the speaker says, “When the world ends, / I will be curling my hair / with my husband’s burning hands.” Using her husband’s body to perform a familiar beauty ritual, the speaker hilariously inverts the idea of beauty as pain: rather than the one who performs the ritual feeling pain, it is the enforcer of beauty norms who suffers.

Like Sylvia Plath’s speakers, the speaker’s tone in Privitello’s book is sometimes chillingly distant, which makes the violence the book describes even more visceral: the reader witnesses the speaker’s dissociation, how trauma wrenches us from our bodies that have become sites of violence. Therefore, writing the body can only be done from a distance. The book never specifies a particular trauma, though it implies that living in our misogynist world is traumatic.

The book wanders across the final century of planet earth—a place where a husband calls his wife a witch because he is “trying to shove his life / into a simple story that dogs, in their colorblindness, / can understand.” The speaker comically insults the husband’s intelligence for reducing his wife’s complexity to a simple story. The wife—who has been dehumanized by being turned into a witch—in turn reduces the husband to an animal. In a later poem, the speaker says, “The men cry as they learn to touch / their own bodies in disfiguring ways.” In other words, the men are so terrified of intimacy that they view touch and tenderness as a kind of mutilation. This terror, rooted in toxic masculinity, comes from the belief that any emotion is a sign of weakness. In “Day 5,” the speaker describes her first sexual experience, revealing that this fear starts at a young age:

The first time a boy took off my shirt
was in a tractor for sale on the side of the road.
Inside of it, we felt so human we cried.

If I told his friends about this, he said, he would die.

This is one of the few poems in the book where two people connect with each other, though that connection deteriorates almost as soon as it begins because the boy feels a deeply gendered shame for how vulnerable he’d been.

This is ultimately a book about humans trying, and failing, to connect with each other. The death drive pulses beneath these poems, and it often seems that the speaker wants the world to end: this capitalist, patriarchal place that robs us of our humanity. Yet these are not only poems of sorrow for our broken world—they are also wickedly funny, gorgeous lyrics of female fury and power.
June 2017