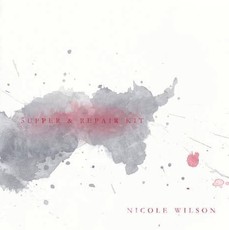 In his collection, After Lorca, the late, great poet Jack Spicer expresses the desire “to make poems out of real objects.” In her first full-length collection, Supper & Repair Kit (The Lettered Streets Press, 2013), Wilson crafts poems that are consumed by objects and objectification, specifically in relation to the female body. These are poems littered with everyday items, from a tomato plant to grandma’s rocker to a crushed crystal heart. Wilson presents evidence of a life lived through the inclusion of field notes, handwritten words, and hand-drawn sketches that cause her poems to feel like found objects themselves. As a result, I often experienced Supper & Repair Kit as writing I happened upon instead of text created for a reader’s consumption.

Instead of spelling out a narrative, Wilson offers fragments of her speaker’s life. The first poem in the collection, “Bear her body smash” begins:

With the book’s opening lines, Wilson depicts life the way it’s most immediately experienced: in pieces. Even the language is broken as she splices “Mid/ western” (4-5) between two lines. Reading the collection felt like trying to gather a stranger’s story by snooping around her house for an hour. It’s a brilliant way of challenging the reader to not simply read, but to actively engage with the text. Instead of relying on the momentum of a continuous narrative, I was forced to participate in the construction of Wilson’s speaker—an experience that undoubtedly will leave each reader with varying conclusions.

Wilson’s poems are awkward, stunning, and vulnerable—strange in the many ways that humans are. Poetic observations sit adjacent to confessions and straightforward descriptions. In “If we’d made it home his fist…” Wilson writes: “Even naked still I picture him red thistle of his chin/ The fridge          the pillow          the garment bag/ I love you and you” (3-5). Wilson is a poet unafraid of her subconscious, of the way the mind skips from thought to image to emotion in a split second. We can see her speaker in bed, dreaming of this man’s face, her eyes projecting symbols of their relationship onto common objects in her room until they arrive at “love” (5)—an abstract idea we somehow know with our bodies, but can barely explain. It is this confusion within coalescence that makes Wilson’s poems real in the way life actually is.

Despite having a table of contents, the book is formatted so that there is no distinction between the poems and their titles. The result is that each of the four sections of the book can be read as one long poem. This blurriness is something that carries through almost all of Wilson’s poems, including “Time to get patched up,” which reads like a dream sequence, or possibly a string of deleted scenes from Pan’s Labyrinth. The poem begins: “Time to get patched up and out of the stretcher, to put/ those injuries to rest, stitches pulled/ tremulous as threads from pigskin” (1-3). These lines are brutal, but also beautiful. From the outset, Wilson makes us aware of her speaker’s trauma and her need to revisit it, the way lifting stitches from a wound reminds us the wound is there.

Here, the image of stitching reemerges. It’s as if Wilson’s speaker is forced to patch her identity together. Given the conventional markers of femininity, such as lipstick, she must choose which ones to bear on a daily basis; she must constantly make herself a new mask to wear. But Wilson’s speaker isn’t only writing of the scars and bandages of womanhood. Beneath all of this is the harrowing narrative of a woman who has lost her twin sister.

When, in “Time to get patched up,” Wilson writes: “In an instant, the plane will take to landing, sidewalks/ emerging like the backs of whales” (14-15), it seems like her speaker is returning from an actual journey, or at least finding her ground after the injuries she’s suffered. But fifteen pages into the book it becomes clear that she is traveling back to her childhood, back to her twin sister’s death and the plane crash that caused it.

It’s no coincidence that a plane emerges as a recurring image throughout the book, acting as a vehicle for the speaker to travel back to her sister’s life, and that a black box becomes the metaphor for the record of her existence. Wilson never explicitly writes how the twin sister dies, but the poem “Everybody in this room is thinking” implies a plane crash: “The day they die comes/ from the radio/ the television” (31-33). Earlier in the poem, Wilson writes:

Look at the map of Ohio
a black box

The speaker is trying to write her way back to her sister’s life, and the map of her home state of Ohio becomes the black box that stores all the crucial information. By traveling through her memory, she hopes to recollect her sister: “I’m not forgetful/ There are geographies/ threaded into my chest” (6-8). Here again, the image of a needle and thread appears, reminding the reader of the “pieces that drop ovals open in the center” (4-5) that she hopes to close through the act of remembering.

As many of us know, possessions play a crucial role in memory, working as jumper cables to spark the dormant battery of the mind. Not only do the objects scattered through the book create a sense of realism, they also act as gateways between the speaker and her sister. In “Everyone called us ‘the girls,’” Wilson writes:

We got identical necklaces as gifts, crystal hearts
on a gold chain. I replaced my heart

with a locket, filled it with miniature screw pins
washers bolts and nails, dumped

These “crystal hearts” (2) emerge again in the poem “Sometimes the body’s nothing,” in which the speaker remembers how she crushed her sister’s, “twerp that it was, under my heel” (11-12). As with the planes and black boxes mentioned earlier, the crystal hearts serve as a multifaceted conceit that adds depth and complexity to Wilson’s poems. Not only do the hearts represent the speaker and her sister’s conjoined identities, but also an ideal of femininity the speaker refuses to be boxed into. Instead of wearing the delicate heart, the speaker replaces it with (stereotypically masculine) hardware supplies. But the meaning in this metaphor goes even deeper: the speaker is so broken by her twin’s death that she replaces her heart with metal parts and lets them scatter, thereby turning her pain into a fractured object she must reassemble to remember her sister. This is what her journey is all about.

The final poem of the collection, “Please leave me a new,” begins:

Please leave me a new
taste bud for eating
this gravel & I will marry it
& will thank you &
I will put my fork down (1-5).

Wilson’s speaker cannot escape the loss of her sister, but she does wish for “a new/ taste bud” (1-2), a new coping mechanism for dealing with the pain. And I wonder—what can she ask for beyond writing, beyond the field notes she gathers to reconstruct her twin? I think Wilson knows this, which is why her speaker hasn’t stopped writing through her trauma by the book’s end, why she continues to consume the past, using her pen like a fork she isn’t ready to put down. Sometimes writing is the best we can do.