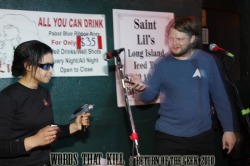 S. Mojdeh Stoakley and John Paul Davis with Phasers
S. Mojdeh Stoakley is a 4 time award-winning, bi-racial, American-born writer, performer & interdisciplinary artist. Her work is about the intersections of race, trauma, and social stigma. She has a BFA from The School of the Art Institute of Chicago, and she is the founder of both The Mojdeh Project and Lethal Poetry Inc.


Q: Can you tell me a bit about the history of Lethal Poetry and the Words that Kill series that’s now at Lilly’s Bar? How did they get started?

A: Well, a few things were happening. The business grew out of my band's desire to take on a whole bunch of community initiatives (like this one). We were hitting a lot of road blocks trying to organize benefit events as a band, but it occurred to us that if we had a "Label" organizing these initiatives, it would be easier to work with venues and vendors. When I recorded my first solo folk music & poetry album, I was 15-years-old; “Lethal Poetry Records” was the name I came up with to brand my CDs, so that name carried over to the business formally.

Fast-forward to my last year in college: my band mates and I consulting about ways to create our music careers while giving back to the community. Sure enough, all three members of The Mojdeh Project became the co-founders of Lethal Poetry Inc. 5 months before we graduated, we had our first Night of Sight & Sound, taking over a cafe. We took all of the things off of the wall and put up our curated artwork and sound installations, and we curated a very eclectic performance line up. The cafe was full. So we thought, let's try it again; two months later we had another Night of Sight & Sound at Darkroom Bar with three times the patrons.

We viewed our “Nights” as our ongoing mini-festival of art, curating anything and everything that could possibly be accommodated by the space. Easily, we could have between twenty and fifty participating artists and performers! We were getting enough attention that we decided to co-produce the launch of a huge mobile art exhibit that summer. When the dust and press settled from that event, we thought, wouldn't it be nice to produce a small monthly event? Something less stressful―Words That Kill—was born. But alas, it is not less stressful. Oh well!


Q: What is the mission of Words that Kill?

A: All of Lethal Poetry's events bring at least two creative communities together. We're very interested in being a bridge for unification. So Words That Kill started as a platform to bring comedians, poets, and musical poets into the same space. At the time, this was also the event that kept Lethal Poetry from going under financially. We weren't paying ourselves salaries, but we needed an event that we didn't garnish to a non-profit to help pay for promotional materials.That got old! In re-evaluating our mission as a business, we decided that every event we run musteither be partnered with a non-profit to give dollars, or it has to be some kind of community initiative. It is important to us that Lethal Poetry is an example for other for-profit companies to give back to the community. So Words That Kill became a food drive for a women's shelter on the north side.


Q: Do you have ambitions of sending a Words That Kill team of poets to the National Poetry Slam?

A: Absolutely! Words That Kill was not always a slam. We had been running a three hour long showcase for 9 months when we decided to take a three month hiatus, restructure, take on some production staff, and come back with a slam! We are the only slam in Chicago that offers a full pre-booked showcase and no-open mic. We are also the only "Omni-Slam." The idea behind the Omni-Slam is that we don't want to restrict artists who associate themselves with other spoken arts from participating. In fact, we feel spoken poetry is so open that we would be more excited to take a thespian, a poet and a comedian to nationals than we would be to take three people who have described themselves as poets. Consider this: is Mike McGee a poet or comedian? Is Robbie Q Telfer a poet or comedian? We just lay down some ground rules; all of our competitors must perform original work that is in a monologue format and under four minutes.

At this point, it doesn't appear that we will be able to take a team to the nationals this year because we haven't heard back from Slam Poetry Inc about our registration, and we're running out of time for planning, fund raising, etc. However, Lethal Poetry will go to nationals this year to cheer our Chicago competitors on and get a sense of what we should be prepared for next year.


Q: How many people are involved with Words That Kill? Who are they? What do they do?

A: Lethal Poetry has a three person core, but there are a lot of people involved with each of our initiatives co-founded by me, Mojdeh Stoakley (President, Lead Curator, Marketing), Fyodor Saknovski (PR & Media Relations), and The Mojdeh Project's former drummer. We have since parted ways with our third co-founder. As of January 2010, Lauren Herrmann is our third co-owner (Visual Director). We've had a lot of people come and go. Most participate as they can because we're still giving most of our profit to the non-profits, so we have to be understanding of people's time and limitations. Specifically for Words That Kill I am the executive producer (overall curation, marketing, final decisions); Fyodor is our logistics and PR; John Paul Davis is our Slam Master; Elanor Ruth Smith provides booking and day-of support; and Byron Cyzopek is our videographer.  Gregory Lion Pickett, one of the alums from our poetry residency, was our first slam master!


Q: What do you think your greatest success has been so far with Words that Kill?

A: Obviously, the shows that we fill the room to the brim are the most exciting because the more people we have, the more people we feed (via the food drive). But honestly, I think our greatest successes have been in booking some of Chicago's most noteworthy performers. We pride ourselves in allowing a gradience of performers (some that are just getting their feet wet and those who have been doing it for a very long time!) so that artists have the ability to grow in front of an audience that's expecting to see the best. We have been very proud to have folks like Marc Kelly Smith (founder of Slam Movement), Marty McConnell (HBO Def Poet), Brian Babylon (BET showcased comedian), Javon Johnson (HBO Def Poet), and others grace our stage.


Q: How did you feel about "The Return of the Geek" show that I had the pleasure of seeing at Words That Kill (May 10, 2010)? Also, have there been other "Geek" shows?

A: "The Return of the Geek" was a lot of fun this year! Anyone who knows me well knows that my love for Star Trek and Space is a little out of hand. I mean, there are Trekkies and then there's me!  I even have a Star Trek/space blog and a geeked-out side project, Vynl Mo. So last year, when the JJ Abrams Star Trek movie was coming out, I declared all of May “Geek Month” for Words That Kill because it was an excuse to “act out!” The show received so much pre-show press/attention/buzz that we figured we should make the show annual! Now, don't be fooled, we were celebrating all geeks! So surely I wasn't going to hold it against Billy Tuggle (poet) for being a Jedi Geek―this is the time to embrace his light saber as much as we embraced my two phasers and my Klingon disruptor!

The turn out and interactivity this year was pretty fun! Last year, I was possibly too into it! I had most of the pieces memorized and rehearsed my Shatner impressions for weeks. This year we had a lighter, more playful approach to the show. But both were equally successful!


Q: Are all of the shows themed?

A: Many of our shows are and have been themed! We've spent the last year realizing that not every show needs to be themed.  However, when we have a good cohesive idea that appeals to people we should roll with it!


Q: Anything else I should know about Words That Kill?

Despite the possibility of having far too many links on one page, I (Stevie) would like to share an audio recording with you from a Words That Kill show I attended May 20, 2010: "The Return of the Geek." This audio recording was sent to me courtesy of Mojdeh:

The History of Shatner