​[midnight with a new moon]
by Maya Marshall

(didn't know what was chasing him)
I knew it meant dad

crackers mommy in the night with fire-
flies I caught

but what do I know
may as well be white

except my grandmother washed white
women's floors and was common poor

except shawty what yo name is? and you talk white, you stuck up bitch
what do I know about black

the black policewoman, saying
but what you really gon’ be college girl?

and I know you’re worried
we can’t both exist

in some rooms, you know,
even the fact of the conversation is treason 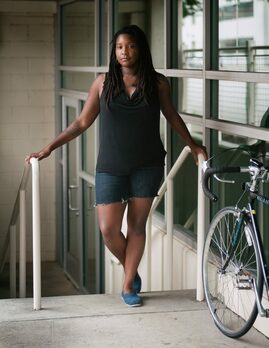 Maya Marshall is an editor and a poet. She is co-founder of the revision journal underbellymag.com. Marshall has earned fellowships from Vermont Studio Center, Callaloo, Cave Canem, the Community of Writers, and The Watering Hole. She serves as a senior editor for [PANK] and works as a manuscript editor for Haymarket Books. Her poems have appeared in RHINO, Potomac Review, South Carolina Review, Blackbird and various other publications. She lives in Chicago.