a slice from the cake made of air by Lillian-Yvonne Bertram (Red Hen Press, 2016)
Reviewed by Jacob Victorine, Book Reviewer 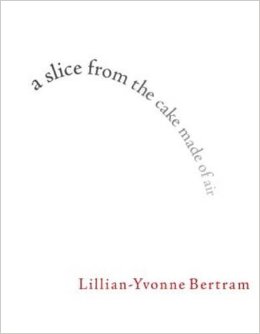 In a slice from the cake made of air (Red Hen Press, 2016), Lillian-Yvonne Bertram explores sexuality, intimate relationships, the trauma of abortion, and the human psyche with precision, nuance, and a sly sense of humor that initially caught me off guard. Bertram’s poems rarely announce their themes or meanings; instead, they wander, question, and play with, and through, definitions and syntaxes, all the while deconstructing them into new meanings. These are linguistically daring poems that challenge the reader to put as much effort into reading as Bertram must have spent writing and revising.

The book alternates between five sections titled with a variation of “r!” that offer sparse, poetic sequences, and five sections, titled “n,” that present unconventional scientific abstracts and denser, more traditionally narrative poems. These varied forms give the reader multiple ways to experience language, as well repetitions to return to. The result is a book that reads fast, but requires multiple readings in order to unpack so many of the thematic meanings that rise out of Bertram’s unconventional use of form and language, such as the speaker’s abortion and the loss of her own childhood.

In the book’s opening poetic sequence “Sometimes I ask to be bound,” Bertram’s speaker offers a collection of autobiographical snippets that are confessional to the point of seeming like subconscious exclamations—one of the poem’s greatest strengths, since so many of the lines feel improvised and, therefore, surprising. The poem begins with the speaker addressing a lover with humor and a bit of sarcasm:

​After all
I ask for it

From my father anything
I ask for

The straightforward language and casual, open tone of the lines—as well as Bertram’s use of the pronoun, “we”—invites the reader to inhabit the same intimate space as the speaker’s lover. By creating this instantaneous relationship between speaker and reader, Bertram encourages the reader to stick with her as the poem quickly shifts to humor, and later, trauma. The speaker’s joke about getting anything she asks for from her father creates a intricate mental landscape and acts as an unexpected bridge between the subjects of sex and abortion:

By this writing
​you’d think
I wasn’t born anywhere—

This leap challenged my initial expectations of the poem and created a complex space where sex, kink, family, pregnancy, and loss all simultaneously exist for both speaker and reader. Bertram’s instinct to acknowledge the writing process within the poem adds a further layer that places the idea of revision—of the poem, of the mind, of the body—front and center. The lines “you’d think / I wasn’t born anywhere” (27-28) draw a connection between the speaker’s body and that of the child she temporarily carried, and point to the mother’s body as a place of birth, not just for the child, but for the mother, as well.

The informal language of “Sometimes I ask to be bound” sits in stark contrast to that of poems such as “Activation Energy,” which—along with a later poem in the collection, “Hungry Like Red”—uses the diction and syntax of scientific writing to explore the experience of giving oral sex. In “Activation Energy,” the speaker focuses on oral sex through the site and space of the mouth:

Initially, the poem feels like it may obscure sex, but, in fact, it does the opposite; words like “substrate” and “enzyme,” in conjunction with “tongue” and “sweetness” tie oral sex directly to the body, specifically the sense of taste, and position it as a process—something that is happening—instead of an act—something that is done. Bertram then deconstructs a common and ineffectual sex metaphor—“lock fit to its key”—by contrasting it with words such as “alive” and “life,” which remind the reader of sex as an active, bodily experience instead of one that is purely mechanical. This is important, since so much of the book explores the body and mind in motion, especially in relation to sex and abortion; I might even argue that Bertram’s poems attempt to offer her speaker greater ownership of her body by contextualizing sex and abortion as ongoing processes, instead of the standalone acts they are often represented as.

Poems like “Algorithm,” which casts light on the fragility of life, add even further complexity to the book. Just lines apart, Bertram’s speaker thinks of getting a dog and learns of a friend’s sudden stroke, creating a space where the reader must come to terms with the seemingly disparate experiences:


The poem opens with an idyllic description of a rural morning and one of those spontaneous thoughts that often arrives with waking. The seamless way in which Bertram’s speaker moves from description, to action, to thought mimics the way the mind so often leaps through the exterior world and within itself. By placing “humming” next to “thought,” Bertram reinforces the mind-body connection and foreshadows the way the poem will return to the body—just not the speaker’s this time around.

The immediate leap the speaker makes from her cat to her friend’s stroke points to how tragedies are so often subsumed in our daily thoughts and tasks. The last three lines of the poem subtly compare the speaker’s cat and her friend’s children while also questioning who is actually happy. Do the words, “all of us” refer to just the speaker and her cat or are they inclusive of her friend’s children, and (how) are they happy in the face of their father’s failing health? These lines also question individual versus communal space and happiness. How can the speaker and her cat be happy when the speaker’s friend is having a stroke?

It is Bertram’s ability to explore so many ideas within a few lines that makes a slice from the cake made of air such a meaningful, and unique, read. In the section-long poem, “r2!,” her speaker asks: “of what erasure / do I remind myself” (6-7), which is echoed in a later section, “r4!”:

I always remind
myself
of what

These lines may reference the speaker’s abortion, but they also point to the inexactness of language and memory. How can someone remind themselves of something they’ve erased? Isn’t memory an act of (re)creation? Instead of presuming to know the answers to these questions, and many others, Bertram presents a space for her reader to sit with them—a space that is not always easy to inhabit, but one I am grateful to have been taken to by a writer as skillful and vulnerable as Bertram.