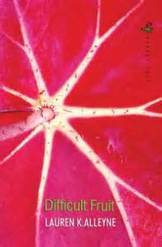 Lauren K. Alleyne’s first collection of poetry, Difficult Fruit (Peepal Tree Press), transcribes the love and trauma that shape a woman’s life, searching for definitions of womanhood through relationships, the body, and history. The “difficult fruit” of the book’s title, grown through adversity and struggle, represents hard-won self-knowledge and a powerful sense of identity. Scattered throughout are epistolary poems to various incarnations of the poet’s younger self–Seven, Fourteen, Eighteen–serving as reminders that “womanhood” is not stable; it is created and recreated day by day, constantly shifting, growing, transforming.

The first piece in the collection, “Ask No Questions,” lays out a sort of ars poetica for the book: “Let me unbury my gods in secret / and rebind them to my prayers, / my necessary guilt.” The purpose of this collection is not for the poet to lay herself bare, not to invite the reader to explore every psychological nook and cranny; it is to reveal and conceal at once, to “confess to the carrying of secrets.” In a culture that almost fetishizes the confessional, especially when it comes to art created by women, it is refreshing when Alleyne reminds the reader that she is still in control. You don’t have an all-access pass. She decides how much you get to see.

Difficult Fruit is divided into three sections that reenact a coming of age, guiding the reader from the fear and disorientation that often mark the end of childhood to the understanding and acceptance of true maturity. The book’s first section centers on themes of loss, suffering, and trauma, portraying the journey into womanhood as a sort of gauntlet. In “Eighteen,” Alleyne writes of an encounter that begins as a dance between desire and fear, then shatters into violence, ending in destruction: “Here is fire and fire and fire. Skins of flame. Walls of flame. / There is no turning here; here you learn how to burn.” As in Alleyne’s other letters to younger selves, the distinction between “you” and the speaker of the poem creates a sense of distance, but does not soften the impact of the poem’s devastation.

In another poem, also titled “Eighteen,” from which the collection gets its title, Alleyne describes the aftermath of rape to her younger self:

18, we will carry our dark, we will
birth ourselves again and again; we will
tend our gardens, harvest the difficult fruit;
we will apprentice ourselves to the work,
and learn the language that will allow us
to summon our own angels.

Here, the repetition of “we will” has a meditative quality, a determination underscored by the collaboration of the poet’s past and current selves in the pronoun “we.” The past and future work alongside each other, but are not the same; the differences between them cannot be elided. These poems acknowledge that, while full reversal of the damage done is impossible, healing can still be attained, and naming the hurts allows the speaker to “summon [her] own angels.” This is not a shallow gesture toward redemption, but a genuine transformation.

While both poems titled “Eighteen” explore deeply personal loss–of safety, of trust–Difficult Fruit explores tragedy on a broader social scale as well. In “How It Touches Us,” Alleyne describes the death of a friend in childhood, “the awful realization/that all laws of matter must hold true, and she was gone.” The acceptance of mortality is another difficult fruit that must be tended. This is also true in “John White Defends,” one of the few poems in Difficult Fruit not written from Alleyne’s own perspective. Here, she writes in the voice of the eponymous White, a black man convicted of shooting a white teenager who was threatening his son. The title of the poem has multiple potential meanings–is White defending his actions, his home, his family?

Here, as well as in the poem “The Hoodie Stands Witness,” about the death of Trayvon Martin, the poet contemplates not just mortality but the layers of power, violence, and oppression that shape racial identities in the United States. Alleyne’s poems elegantly express in few words that these acts of violence are not random; they are the inevitable fruit of the soil that grew them. “I should have known/there would be a reckoning,” she writes in White’s voice.

Just as Alleyne’s loss is not one-dimensional, neither is her love. The second section of Difficult Fruit explores multifaceted passion that is both creative and destructive, both comforting and thrilling. In “Love in G Major” she describes a love “that charms good sense / into sweet, burning madness,” but in “That the Body Wants,” desire has faded to “slow horses wearying across this distance.” Coming on the heels of Alleyne’s exploration of devastation and healing, these depictions of romance are tinted by the knowledge of how badly a person can be hurt. Although the poems don’t follow a straightforward chronology, there is a sense of accruing wisdom, layers of experience overlapping to form meaning. In “Thirty,” Alleyne writes, “[M]aybe older and wiser is just learning / how to put yourself in your own good hands.” If there’s a love story here in the traditional sense (the beloved is found, lost, found again), it’s not between a woman and a man, but between a woman and her own identity, her own self-determination.

In its final section, Difficult Fruit takes a more contemplative view of womanhood than the previous two-thirds, offering a broader scope through which to examine the self, the body, love, and fate. This section in particular is ruled by the tension between the poet’s older and younger selves, as in “Fourteen,” where Alleyne writes, “Let us not tell her of wither. / Let her turn her best face to the sky.” The poet (and the reader) has already seen what wither has to offer, what cruel faces the sky may make in return. The arrangement of the poems around these themes and in this order offers the reader optimism tempered by a heavy and haunting knowledge.

Alleyne’s language throughout the collection is elegant and fluid; her poems have few sharp edges, few jarring or discordant moments, but move with certainty from one powerful emotion to the next. Yet for all its steadfastness, it still has the power to surprise, as in “A Ghazal for the Body,” when she writes “So many words for the dead, / you say. There is no synonym for this: the living body.” The emotion, unexpectedly powerful, lingers long after the book is finished. These poems are the kind of fruit that leaves stains on the lips and fingers.