Ode to the Clit
by Lark Omura

Pleasure button, power switch, familiar ball of lint
I finger in the warm pocket of my right hand. Pea-sized star
hot with gravity, the moons of my palms shift their faces
towards you in respect. Island of flesh I depart to
in a small pink boat, coasts fragrant with night-blossoms.
Swelling motherland of my body, note sung at perfect pitch
familiar to you in sensation, celebrity of my lower half,
deserving of flowers and a glittering star on Hollywood Boulevard
carved with your imprint. Nature's sleep aid, stress-intermission,
tropical province of my god's second coming. Undisputed
champion holding the golden trophy of my own Yes.
Commander of velvet joyride, teacher of those
who crawl at my feet begging to taste my wine,
kiss my ring, bless the waters of my nine cups, swim
in the lagoon rumored to exist at the top of my highest peak.
You, tossed aside by history, like forbidden knowledge
curled to ash in the library of an ancient world.
Redrawn maps and treaties have never been languages
you've trafficked in. Your soft power, seductive as a split
papaya glistening with black seeds. I would die a million
little deaths by the delicious silk of your poison.
Staring directly into the light, as it pulls me. 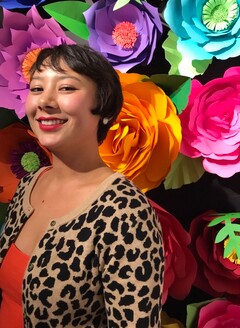 Lark Omura was born and raised on the island of Maui, and currently resides
in Brooklyn, NY. She is an alumna of Voices of Our Nation Arts Foundation,
Winter Tangerine, Kearny Street Workshop's Interdisciplinary Writers Lab,
and the Community of Writers at Olympic Valley, where she was selected as
the 2019 recipient of the Hillary Gravendyk memorial scholarship. Her
poetry has appeared in Prairie Schooner, The Offing, Aster(ix), Bamboo
Ridge, and The Hawai'i Review, among other places. She holds an MFA in
poetry from Rutgers University-Newark.
Spring 2020