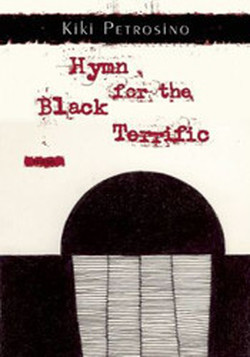 Sarabande, 2013
Kiki Petrosino’s astonishing second poetry collection, Hymn for the Black Terrific, reminds me of the Kafka quote, “From a certain point onward there is no longer any turning back. That is the point that must be reached.” The speaker of these startling and brilliantly-crafted poems possesses the violent wisdom of one who has awakened (whether through trauma or choosing to see clearly) and can no longer return to who they once were. This voice burns and blossoms through the collection, lit with the volatility of unrequited desire and hunger, while retaining a tenacious and indestructible consciousness. Propulsive and hypnotic, the collection forges music out of desperation and revelation, creating a language that is both playful and menacing.

Set in three distinct, autonomous sections, the structure of Hymn is straightforward and authoritative— a contrast to the wild and propulsive unspooling of imagery and syntax. The first section “Oiseau Rebelle” takes its name from the Carmen aria, “Love is a Rebellious Bird.” Like the aria, which is marked by repeated musical phrases and mirrors the fickleness of love, the tone is obsessional as words reappear as holy objects, charms, and artifacts. For example, in the prose poem “Allergenesis,” Petrosino creates the feeling of being overwhelmed by the onslaught of allergens while admiring the beauty of their names:

They come hot & star-limbed & buzzing, with their wire bones, with their names turning edgewise
in the mouth. Bloodweed, Chestbane, the names. Knifeclock, Mulehook, the names. They come lifting
themselves long as sentences in air, spiraling down the rifled barrel of the windpipe. (7)

​This poem seems to mirror the experience of reading Petrosino’s work— to be inundated with language that pleases and terrifies, such as in the poem “At the Teahouse” where the speaker’s voice becomes larger-than-life through sequences of gorgeous and hyperbolic imagery:

Look at my flat gold feet chattering over mucky stacks
of tiles. No one yells at me in the light. Once upon a time
I had enough anger in me to crack crystal. I boiled up from bed
in my enormous nightdress, with my lungs full of burning
chrysanthemums. Now just imagine the color of the sky
in my braincase. I’m drinking tea with diamonds in it. (21)

There is a voluptuous abundance to these lines, driven by surrealism and precision. Rather than concrete meaning, what comes across is the hot blood of desire cupped with intellect— a disembodied voice in search of a vessel, context, and history.

“Cygnus Cygnus,” an ars poetica dedicated to Dean Young, seems to interrogate the need to see the world as it is while leaning into mystery and astonishment:

The sound of a swan is no chemical thing, but a bloody hum
thick with rivalry & blue weather. It’s rage that moves

the tongue of a swan in strange meters, it is only rage
that pulls the tarsometatarsus back to the joint, like
a bowstring stretched to the edge

of its hungry self. Just so, you taught me to be warlike
in my songs & still to praise the palm-sized stars
brooding over their great darkness. (23)

The poem cleaves to mythological and surreal imagery while inducing tenderness and intimacy. Petrosino’s diction, as in the rest of the collection, accrues into a clutter that could potentially overwhelm and obscure meaning but instead creates a music that amplifies emotion.

Nowhere is repetition and obsession crafted more brilliantly in the collection than in the second section, “Mulattress.” Set in ten parts, each poem is a golden shovel, sharing a repeated line from Thomas Jefferson’s Notes on the State of Virginia. The sequence reclaims and reconfigures Jefferson’s racist language with stunning lines such as:

​If you could become a very strong
horizon made crisp with towers &
huge stones, would you slip your disagreeable
knot of flesh, then, O apple of dark, O door?(27)

Like the kidney-
shaped sadness I carry in my head, & more
brightening than ever. You can read by the glands of the skin
how she knitted me. I lover her hands, which
lift into sudden lakes. (28)

Each poem is a reckoning with the past and the speaker’s identity, self-aware as the speaker interrogates her origin.

Nearly every line in this section is worth quoting— “Sometimes I catch my mother in a handful of mint, its odor fresh as stars”— possessing a cerebral sensuality and gothic, dreamy realism. While the lyricism is enough to swoon over, the sequence itself is a formal feat, echoing elements of the ghazal, sestina, and crown of sonnets. By the time we arrive at the final poem, Jefferson’s line has almost been obliterated, diminished to a ghost, a faint scar or seam. What’s left is the speaker’s questions, her blessings, and the impossibility of reconciling history.

This theme of internalizing language reappears in the third section “The Eaters,” a sequence of prose poems titled after (or inspired by) the names of dishes served to the poet during a trip to China. The fact that the titles are actual menu items lends whimsy and delight to the poems. Who wouldn’t want to imagine eating a dish called “I Love You, No Discussion,” or “Moon-Wrapped Fragrant Spareribs”? Yet there is an underlying heaviness and danger— partly from the dissociation implicit in calling the speaker “the eater.” The body is dismantled and exposed through obsessive description: “If she could fang her own hide open, she’s do it shred by shred. First the film around her mouth would split & draw away from chin & neck, down breasts grown thin & webby in the light” (49) and “Her teeth make mirrors of the sea” (51). The speaker’s voice is omniscient and clinically removed, making the dissection more troubling.

The sequence is propelled by the repeated question: who is the eater? Painted as an enigma, the eater is given flesh and context through obscure, richly tactile clues: “Happy is that eater who rules by the cyclone of her face. By the syrup of her eye shall she drown the clanging earth” (51). She is mythological, elevated with visceral, textured description and imbued with a kind of dark magic: “Her claws push hard at scattered bits of gravel & snapped feathers. They say the world was full of eaters, once: heavy as sea glass, slow as blood” (47). The effect is both disorienting while pointing to a hidden narrative— the eater is the poet who is lonely and experiences the world while numbing herself to it, though compulsive eating.

While each poem pulses with vibrant diction and imagery, the collection itself felt orderly and quiet— an effective but sometimes dampening organizing principle. Each section is narratively and formally homogenous to the extent that they could be read as individual chapbooks or a long sequenced poem. While this provides a structural stability that might support the reader through difficult or challenging terrain, I finished the collection wondering what opportunities might have been sacrificed for this orderliness. Or rather, I felt that my reading experience had been so thoroughly plotted that I didn’t have room to lose myself in the book. However, this shows only my own partiality to a certain kind of mystery or duende in contemporary collections, which Petrosino instead cultivates at the sentence-level. And perhaps the cumulative effect of her language is best contained within these sections, like a series of rich arias separated by silence. Ultimately, the richness of language is enough to be sated, asking us to be like the eater who, “…tastes her own blood & understands the word abundance for the first time” (40).
read more...
Issue 18: Summer 2016