To the Chapel of Light by Joshua Young
Reviewed by Jacob Victorine, Book Reviewer 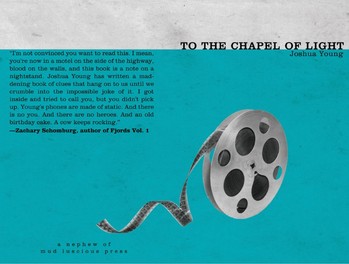 Joshua Young’s To the Chapel of Light (Nephew, an imprint of Mud Luscious Press, 2012) may be the most frustrating book of poetry I’ve ever read. So frustrating, in fact, that I told Josh this the last time I saw him (he and I both attend the MFA Poetry program at Columbia College Chicago). His reaction: laughter (as if he knew something I had yet to discover). Young’s poetry, at times, can be exasperating, not because it is tedious or poorly written, but because he has expertly crafted a narrative and then torn it to shreds, leaving the reader with nothing more than scraps of a tattered map. Reading the collection, I initially craved a straightforward narrative. I wanted Young to place the keys in the ignition and drive the book for me, all the while explaining the landscape along the way. I wanted him to tell me why I should follow a group of voyeurs to the chapel of light, and what I might find there. This is often how a narrative works, but Young is not your typical narrative poet; he is more demanding of his reader. He will drive the car, but you must figure out what the landscape means, you must study the road signs to figure out where and why you are going.

Young has written an American postmodern Odyssey that summons the ghosts of the past century, replacing Homer’s sea with a road, his sirens with a choir. Using the camera as vehicle, Young leads us along dirt roads strewn with relics of southern racism, preindustrial farms, and the lenses that once captured the changing American landscape. The only thing along this journey that appears intact is the chapel, until you realize the preacher is blind. Young’s camera is as obsessed with Manifest Destiny as any other in America, except it shows the trail of blood instead of gold. The book simultaneously calls to mind Kerouac’s On the Road and the Blair Witch Project, while reminding the reader of our culture’s infatuation with cameras. Documentary films, reality TV, the paparazzi, even the photographs we post on Facebook walls: Young knows how much Americans love to look at others, and themselves, yet he also knows how often the camera lies. He has sewn and torn the seams of his book because he wants us to see inside; he wants us to question the camera, to question the angle of history we’re shown, and the angle he gives us.

Young has a background in film which shows throughout the book. The collection is framed as a film in verse (although the poems are in prose blocks and the book is not structured like a screenplay, but as a film in poem form). Instead of sections, the collection is organized in acts with an unorthodox cast of characters: the voyeurs, the poet and his friend, and the camera, just to name a few. Throughout the book we follow the voyeurs as they leave a big city on the East Coast and start south, eventually heading west toward the young priest and the chapel of light.

The plot seems clear enough: a group of friends heading on a road trip west in search of some mythical place (a rather common trope in film and literature). Nothing else is as it appears. The collection opens with the poem, “INT. APARTMENT – NIGHT” in which a poet, snakes wrapped around his arms, comes to the voyeurs’ door and says, according to their retelling, that “he’s gonna pull a fiddle from the throat of a sparrow.” The line isn’t meant literally, despite how emphatic it sounds. Instead, the poet’s friend keeps repeating the phrase: “I like it when a camera stops outside the door like this & just waits a moment, listens.” This may seem like nonsense or mere misdirection, but it is Young’s way of instructing the reader how to read his book. Here he is telling us to listen: that sometimes what we hear is more truthful than what our eyes or the camera shows us.

The collection is as much a road trip through the gut of America as it is a commentary on film, media and history. Yet, Young doesn’t care about the everyday American voyeurism of tabloids, TV and the news; he is interested in transgressing, going where the camera is not supposed to go. (Think a camera at Ground Zero minutes after the attacks or the woman who caught Mitt Romney insulting forty-seven percent of the country at a private event.) Like the opening poem, the first installment of “dear brothers” (a form that repeats throughout the book) warns us to question what the camera offers. The poem is a letter from the voyeurs to the brothers in which the voyeurs recount more of the poet’s advice:

the road is not your friend. no
matter what you see or hear, it is simply a guide,
or maybe you can look at it as the tracks hunters
follow to the water hole.

Do not simply follow the road (the narrative), Young cautions; its end is nothing more than a mirage taunting you in the distance. Instead, we must follow the “tracks”: the sound, rhythm and movement of the poem. This is Young’s poetics in poem form: appreciate the poem for what it offers—emotion, music and image—instead of the meaning we so often project onto it. Do not hastily follow the camera as it pans to the next page, take your time and explore the words in front of you.

Yet, To the Chapel of Light is more than a meta-commentary on reading poetry. It is also a chilling journey through the grim history of America: a phantom limb that stings and stings even though we never see it. In “EXT. FARM – DAY” a boy warns: “‘property this whole fucking thing is about property.’” Later, Young brings us to the river’s edge where “men bleed from the tree line like water from a paintbrush.” These images are disturbing reminders of Manifest Destiny and the Trail of Tears, slavery and the Civil War, murder and lynching. Young seems to comment that the most brutal parts of our history are in relation to property. It is no accident the voyeurs head west like frontiersmen or cowboys in search of land or gold. In America, someone is always looking across the country for his fortune, willing to go to war if it means protecting what he owns. Young offers a tour through the grisliest parts of America and I scooped up every bloody bit.

This tour is not meant to simply shock, however, but shed light on the greed and brutality often overlooked by American holidays, history textbooks and news sources. In “INT. BAR – NIGHT” the voyeurs arrive at a no-name bar somewhere in the south. Young writes: “confederate ghosts claim the back room where the lights haven’t worked in ages.” He continues: “the dust back there is so thick you need a broom just to walk.” Young is telling us to sweep away the dust, to uncover our buried history. Ghosts only haunt in the dark. If we turn on the lights they lose their power. Confronting the past, instead of letting it rest in a bar beyond the back roads of our hearts, is the only way to move on.

In this way, Young translates theory into image throughout the book. The places and people we encounter on the page are almost always totems, offering more than their appearance. This holds true in “EXT. RIVER – MORNING” when the voyeurs come across the young priest as he wades in a river: “there’s the young priest with holes where his eyes should be. He lost them to the bootleggers, still looking for gas money and a ticket west.” Like many of the other battered figures in the book, the young priest is a victim of Manifest Destiny: a man who has lost his vision to the greed of other men.

Young works through the back roads of America to show the bloodstained stitches that hold the seams of the country together. When the priest talks of “how everyone here bleeds America” he isn’t just referring to the men and women who love the country like their own blood. He means all the people who have died in the making of America.

It is no surprise that the book’s final poem focuses on the voyeurs peering down at the chapel of light, a “procession of ghosts and soldiers spread all the way to the foot of what we stand on.” These are the owners of the bones Americans have used to build our roads and homes, and Young has written a film in dedication to them. Yet this picture is not meant for the screen, another filter to cloud an already vague history. We may be the voyeurs in To the Chapel of Light, but Young does not want us to simply sit back and watch. Instead, he offers a map. We must read it carefully if we ever expect to figure out where to go.