Said the Manic to the Muse by Jeanann Verlee
Reviewed by Kendra DeColo, Book Review Editor 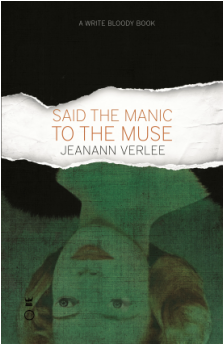 “Honest women make dangerous property. Don’t I know what grief in a good woman can do?”
–Jeanann Verlee

Jeanann Verlee’s second collection, Said the Manic to the Muse (Write Bloody, 2015), is a blunt, resilient exploration of loss, grief, and the battle to attain wholeness while claiming the complex parts of who we are. It is a book that gives voice to manic depression, heartbreak, survival and shame, exploring the severe and harrowing experience of being in one’s body when it becomes unbearable to feel. The speaker endures both trauma and the brutal monotony of daily life while allowing herself to risk and feel. At its core, Said the Manic to the Muse is a book of love poems for women, real and mythical, who: “shimmied hard as a wrecking ball,”  “curse a cop in a riot,” “wouldn’t go out frayed and bleating,” and who teach us how to cope and survive.

Many of the poems explore the complexities of relationships, specifically the speaker’s relationship with her mother. In “Genetics of Regret,” a litany of apologies, Verlee pivots from the trivial to the tragic:

I’m sorry I scratched your Neil Diamond record.
Drew the picture of the dead cat. Titled it after my dead sister.
I’m sorry they pulled her from your body like a sad, wet sponge.
I’m sorry no one came to the hospital. Sorry I felt sorry.

This might be one of the truest mother-daughter poems I’ve read. The speaker carries the guilt and shame of abandoning her mother while at the same time being unapologetic for who she is. She is sorry but she is not going to change: “Sorry I have no intention of coming to find you.”

Many of the poems about the mother echo narratives about the speaker. In “How Did Your Mother Die?” and “How Did the Author Die?” the poems share repeating lines, such as “Palm-print. Men. Fuck. Slap. Welt. / Budweiser.” There is a sense of inevitability and fate as the speaker makes sense of what she has inherited and what she will recreate. Similarly in “Careful the Blood” she addresses the inheritance head on:

Here I learned to move. Swore never, and
failed. It’s in the blood. Mama’s long strut,
hard jaw. When baby died, she counted down
the ticks of her own pulse. When papa left, the
hard in her bones hardened.

The events in this poem mirror the speaker’s own life, surfacing throughout the collection in narratives about the devastation of repeated miscarriages and the ending of a relationship. The mother is almost a doppelganger, a shadow-self that illuminates and haunts the speaker as she makes sense of her life.

The speaker’s mania is another reoccurring character, showing up and occasionally overtaking the poems. In “Manic” the illness is personified: “She is the redheaded breeze on your face. / She is the movement, the hum and stir. / The cut and fury. Tornado, / iron-fanged wrath.” As with the mother, mania is a shadow underlying many of the poems, a figure with whom the speaker must reckon. These persona poems are some of the most vivid in the collection. In “The Mania Speaks,” there are fantastic lines like, “You clumsy bootlegger. Little Daffodil. / I watered you with an ocean & you plucked one little vein?” And in the chilling, penultimate poem, “Finally I Allow Him the Pen,” which gives voice to a lover and might also be read as the speaker’s inner monologue:

You firestar. Pool of moonburst.
You turned my skin to dust. Rawblade glasstooth girl.
With your hot rage and bus ticket anywhere.
Never saw a woman run so many directions at once.
One night, you shined so bright the police came to watch.

The distance created by persona seems to allow for more narrative leaps and wild word pairings. The language feels volatile, larger-than-life (“Your porchlamp laughter. The clack and sweep and throb”), adding counterpoint to the sparse and understated poems that explore the speaker’s grief earlier in the collection (“My chest is a birdcage / where two canaries are perched, / chirping and preening their feathers.”

My favorite poem in the collection is probably one of the quietest: “Girls and Simple Things,” dedicated to the poets featured in Oprah Magazine’s controversial (missing-the-mark) article which emphasized the poets’ outfits over their words. Set in tercets, the poem is about three friends shopping for things that give them joy. That is all it needs to be about to have the power it does.  However, there is so much under the surface, so much expressed in the simple descriptions and understated lines, such as when the speaker describes her dress:

… It wrinkles too easily and the
sash bunches but there’s pink crinoline and polka dots and it
is one of my favorite things because the day I found it, I was
with two women I love. Two women doting on themselves,
frivolous. The doting was permission and I am always
needing permission (to honor myself or be cold to the wretched
or ruthless to the fools), so this was a day of allowances.

I love that this poem dismantles the word “frivolous.” That reading it, I saw myself tentatively walking into a nice store, fighting against shame and unworthiness. It gives us permission to indulge in what delights us, understanding that it takes bravery to feel good in one’s body, to celebrate and be seen. The poem also smashed any critique I had felt about the Oprah article, or at least cast it in a new light.

Another favorite, “Why You Cry at the End of Her Life,” is similarly direct and plain. About the loss of her dog, the poems begins, “Sure, the dog is old and you have been waiting. / You’re not a fool and she is not mythological.” The poem in this style painfully and matter-of-factly moves through the experience, showing the “sorry mess of animal you’ve got laid up” until the final heartbreaking lines:

…what matters here
is the night she fought those men. Her bark and panic,
her yelp beneath their boots, the snarl she gave.
The stubborn growl. The refusal. It is how she tried.
You, naked and beaten. And she, the fighter.

These poems, which come about halfway into the collection, are so affecting because of the struggle and loss that surrounds them. Verlee’s words are comforting and affirming, not just when they’re giving us permission to be kind to ourselves, but when they give us permission to be fucked up, unlovable and hopeless. Sometimes that’s just what we need—permission to fall apart, be unredeemable—before we can put on our polka-dot dress, say fuck it, and dare to “covet a tattoo / or philosophical conversation. / A book, a trinket. A new poem. A pulse.”