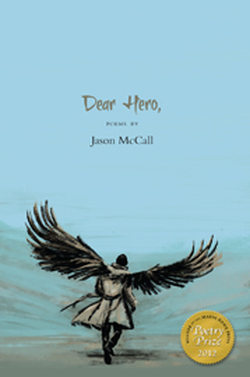 It’s rare to find a book of poetry that successfully rewrites mythology by engaging contemporary questions and beliefs. Too often it seems writers are content to revisit the already written lives of mythological figures instead of using their outlines to challenge our perception of past and present. For the latter, Anne Carson’s Autobiography of Red comes to mind as does, now, Jason McCall’s Dear Hero,--a stunning and subversive collection that re-imagines parts of the author’s life through classical and comic heroes. Winner of the 2012 Marsh Hawk Press Poetry Prize, the book should have garnered more attention over the past two years. What McCall does in fewer than sixty pages is far from easy: give new life to characters that have been written about so much it’s nearly impossible to avoid cliché.

That precipice of “nearly” is the space McCall inhabits as he asks the reader to reconsider the importance of mythology within their life, and within the broader scope of society. Many of his poems use myths as frames to transpose the heroic onto “common” lives, and when McCall chooses to inhabit the voices of well-known heroes such as the Trojan prince in “Hector Rebukes the SEC Pregame Show,” he does so while communicating with the present; for example, his Hector speaks to the destruction of his family by dismissing the football adage, “Defense wins championships” (1).

This weaving together of micro and macro elements is apparent from the opening poem, “Nova,” which sets the tone for the collection in its sparse seven lines by connecting the immediate to the distant, the grandiose to the mundane:

Somewhere,
a star is dying.

here complaining
about the volume
of the band and dim
lights in the bar. (1-7)

McCall’s language is so precise and surprisingly intertwined--like the dying star and the “you” in the dimly lit bar--that excluding even a line would deprive the reader of the poem’s images and meanings. Like “Nova,” the rest of Dear Hero speaks in the language of interconnectivity. A light extinguished light years away is as relevant as the one dimmed above your head; a life lost matters whether it happened thousands of years ago or last month; the gods of Ancient Greece and Rome hold just as much power as the God many of us pray to today.

In “Prayer to Hercules as My Father Goes to War,” McCall continues to collapse time, place, and bodies: “Legend says we are the same / shoe size. Twin thirteens, unlucky / pair” (1-3) the speaker begins his prayer. By drawing a connection between Hercules and his speaker through a mundane but easily envisioned physical characteristic such as shoe size, McCall imbues his speaker’s words with the importance usually reserved for a hero. So when the speaker asks Hercules, the son of Zeus, to protect his father with the bounty from two of his famous labors, we begin to reevaluate the importance of a life we may have no connection to. McCall writes:

Can you hear me when I kneel and plead
for my father? Dip his bullets

in the hydra’s blood, place your lion
pelt over his shoulder and let the enemy’s

McCall takes the elevated imagery and language of mythology and applies it to his own life, thereby challenging the reader to question if we care too much for our heroes and too little for less publicized lives, including that of the speaker’s father. In effect, McCall offers a deconstruction of fame within American society.

This concept takes an even more specific shape in “What a Dying Race Leaves Behind,” a poem that could not be more relevant right now. The poem opens with epigraphs from Dwight Howard, Shaquille O’Neal, and Gil Scott-Heron, which collectively reference Superman in relation to the black body. When McCall’s speaker asks: “Why do black kids bother to dream / so big” (1-2)?” the question not only takes on the history of Superman--the last son of the alien planet Krypton--but that of black men in American professional sports, including O’Neal and Howard, and the aspirations of the teenagers who look up to them.

As he does in “Prayer to Hercules,” McCall interweaves real and mythological lives, including those that often fall under both categories, such as famous athletes. The speaker asks: “But what is a human body worth compared to Magic / Johnson’s revelation, Ali’s decay” (5-6)? By questioning the worth of the human body in relation to two of the greatest athletes of the past fifty-some-odd years, McCall’s speaker asks us to weigh the value of the unpublicized versus the mythologized life, and more. Both heroes suffer from serious human ailments: Ali from Parkinson’s Disease and Johnson from HIV. When the reader considers the title of the poem and its implications—“dying race” may refer to both Kryptonians and African Americans--it appears that McCall also wants the reader to reexamine the way American popular media presents the black body (powerless or invincible, heroic or demonic, but rarely anywhere in between).

Whether intended or not, “What A Dying Race Leaves Behind” arouses questions regarding the way dominant culture values some bodies over others: Superman’s body is deemed important because it protects us; O’Neal and Howard’s bodies are deemed important because they generate money. But what of the people who haven’t been idolized and commoditized? How has the way society views the black body changed over the past two hundred years?

Throughout the book, McCall uses pop culture as a foundation for deeply personal and political questions. Instead of dismissing superheroes and zombies as fluff, he carefully studies the ways in which they represent the people who create and consume them. In the prose poem, “Watching The Walking Dead on the Anniversary of My Suicide Attempt,” the speaker explores the meanings of zombies as he sits beside his girlfriend: “We see the hordes and imagine our own secrets and treasures and loves unearthed and out of control. What have I buried” (6-8)? McCall’s speaker understands that zombies are a physical manifestation of our secrets revealed and out of our control. We don’t fear them because of the “brain eating” but because of “the betrayal” (5). It’s telling that, although the title references the speaker’s suicide attempt, he doesn’t divulge it to his girlfriend within the poem. Like the human characters in The Walking Dead, he is afraid to admit how close he has come to death, how much he shares with the dead.

When McCall writes, “I watch because it’s a mirror; I watch because the mirror is too sharp. I watch to learn how to survive” (19-20) he is not simply referring to The Walking Dead, but to the way we view heroes and other pop cultural icons, whether we realize it or not. Dear Hero, is the rare book that both reimagines popular mythology and reveals the society that creates it. McCall’s poems understand that heroes are not projections but reflections of our culture. What Dear Hero, shows me is that we want to be better than our most deep-seated fears, but we are still far from defeating them.