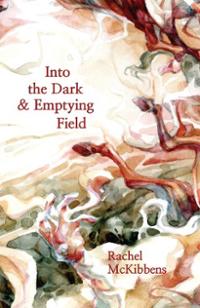 Like a flamenco singer or the rapper Immortal Technique, Rachel McKibbens is a poet of toughness and grit; equipped with tenacity and a voice operatic in tone and scale. In her second collection Into the Dark & Emptying Field (Small Doggies Press, 2013), McKibbens’ voice— equally capable of empathy— verges on cold-bloodedness as she sets characters against hostile landscapes, revealing their deep, disfiguring flaws. The catharsis that we might hope for in a collection about loneliness and grief never quite arrives. Instead, her poems swerve and erupt with metaphor, transforming the catastrophic and dreary into the lush and fantastic. The vibrant language never serves as relief but underscores what cannot be escaped: the inventory of one’s failings set against fantasy and hope.

Into the Dark & Emptying Field is truly a book for grownups. It is about emotional responsibility and accountability in a world that has no rules. Every action has a karmic effect; emotions manifest themselves as physical actions, making nearly every character capable of violence.  Many of the poems throughout the collection’s three sections build upon this premise: no one makes it through this world unscathed or innocent. We see this in the dismembered and vacated bodies of the book’s characters: people made monstrous by metastasized emotions. However, rather than attempting to assert moral clarity, the poems’ barrage of metaphor and surrealism destabilize, denying us a roadmap or code to navigate this field.

The collection begins with the familiar and dreamy scene of a talk show, “Two Ears for Luck, a Nose for Freedom,” in which an Afghani girl has been mutilated by her family and is there to receive a new nose. At first the poem bears the journalistic tone of ‘witness’ but quickly veers into the surreal when a guest wins a raffle to help repair her face. “The man is awarded a hammer and a bucket of nails/ As he pounds her new nose into place, the man can’t resist nailing the woman’s eyes shut too.” The sudden, unexpected act of violence disrupts the narrative and we are thus cautioned to look beneath the surface as we go forward.

The poems are disturbing not because of the actual violence or hyperbole, but rather the emotional anguish we recognize in the personifications. In “A Child Without Arms Running Through a Field (Wyoming)” we watch the speaker become infected by hatred and rage, acting out a violent fantasy onto an armless girl. “My heart, an angry blood hive. I reach/ out and close her hair into my fist, then pull. Her head rips/ back, and when it hits the soil, blooms into a scatter of blue flowers.” While the action itself is disturbing, it is the ephemeral emotion, like a toxic vapor, that poses the greatest threat: the monster just as easily inside of us, complicit in the act.

The steady stream of images and metaphor create a lyrical ruggedness—the sense of running ones hand over a broken-glass mosaic, the language visceral and compressed. The best lines—and there are many of them— are the jarring mash-ups of diction and images such as: “You sit at your kitchen table/ masturbate next to a half-eaten bowl of cereal, swollen clouds/ floating in pink sugar milk” (“Reading all the Ads in the Back of Magazines”), or “She is sweeter than a candy dish,/ her breasts furred with stars” (“The Other Word for Hunger.”) The language gives texture, adorning the more neutral scenes with turmoil and edge. There are few inert scenes—the lines kinetic and slithering above the abyss: “ Her hair smelled like an old/ dictionary cracked open/ after rain. I want tenderness,/ she said. as a row/ of pigeons crashed/ against the trees/ like good china” (“Lets Crawl Into That Photograph & Stay There a While”)

However, there are moments in the book when the literal murkiness and piling of metaphor diminishes emotional clarity, such as in “Overheard at the Cannibal Café, Union Square”: “Her eyes, a dark potion. His face, a spoiled clock….A silence snaps the air.” The premise of the poem calls for a catalogue of simile and wild images—which is probably why they seemed less thrilling than those found in unexpected places, such as “The Widower” where urgency and higher stakes make the metaphor compelling. This poem lends itself to catalogue, set up as an inventory of a widower’s refrigerator: “The pale sticks of butter/ resemble her wrists. The maraschino cherries,/ a jar of shrinking hearts.” But here the language feels more direct and intentional, leading up to the wrenching last line:

He won’t come to the door to explain to them,
But her lipsticks on the carton

or how the spoiled eggs, perched
in their pink, Styrofoam casket,
are waiting to be cracked against the edge of a bowl,
or thrown at God’s front door.

While I’m a sucker for McKibbens’ boldness and dizzying metaphor-making, my favorite poem in the collection is the sparse and plain-spoken narrative “South,” which reveals— or rather confirms— McKibbens as a masterful storyteller. The poem begins with a seemingly typical family road trip. Halfway through the poem something terrible happens, so awful that, like the speaker, you can’t believe it’s real. However, the poem ends, not with despair, but the ambiguous thrill of astonishment:

…I closed my eyes
for maybe two seconds. I don’t want to tell you
where I went in that time. The house on South Street.
Three hours past curfew. When your uncle came
into your bedroom. And he walked over

to the pink transistor radio. And instead of turning it off,
he turned it up. And when he stood over us
in our sleeping bags, the look that he gave us.
My god, there is nothing else in the world
like it.

The narrative leap here is stunning and seems to build on the fierce surrealism of earlier poems, allowing this naked clarity to come down like a fist. It also powerfully enacts the associative nature of trauma; how buried memories are ready to surface when we are triggered.

Throughout the collection, I was reminded of a line in Denis Johnson’s poem “Now”: “I am almost ready to confess it is not some awful misunderstanding that has carried me here, my arms full of ghosts.” The speakers of McKibbens’ poems have taken this sentiment a step further. They have completely abandoned their delusions. Instead, they embrace the wreckage and admit their complicity, such as in the poem “Bon Dieu”: “…Because I do not believe/ in coincidence, because I know that every thing/ happens because someone has made it happen…”

Still, the unknown and mystery is what propels the collection’s lyricism. There is always more to a scene than the actual imagery or action—the emotional truth always more complex and ambiguous than what we are made to see. In one of the final poems “Like Stones” the lines are both concrete and enigmatic:

We go until our cunts wild the air, then settle
the boys into the earth feet first and use their teeth
for lanterns; what greets you in the dark
is not what greets you on the light.

The characters are not searching for redemption or transcendence—neither is the language trying to comfort or deceive. It is about endurance, accepting the life you have been given and the life you have made. The surrealism and figurative language create a dreamscape in which our interior lives clash and survive—as in the poem “Oedipus”: “she lifted her eyes to the darkest patch of sky/ and said, When grief takes hold, you monster through it.” The monstering is felt in McKibben’s relentless, grim pursuit to give shape and form to terror. But there is joy and magic there too, felt in the sudden shifts and bursts of language, reminding us that McKibbens, even in a locked cellar or darkening field, is a poet of fierce compassion who knows the only way out is to walk through.