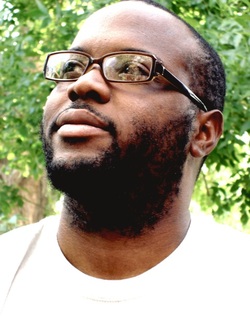 Muzzle, I thank you for letting us playwrights come play.

Plays are often left out of the literary clubhouse occupied primarily by fiction, poetry and (sometimes) creative nonfiction. Plays occupy an odd territory.

As a writer of plays, performance poetry, rap music and essays, I have long been an advocate for true cross-disciplinary exchange. Each form has its own vocabulary and aesthetics. Spending time in each will greatly inform the other. Just as innovations in page bound forms of fiction and poetry are celebrated in journals, performance writers have much to add to the contemporary lit-scape. We too are interested in economy of language, the balance between show and tell, the birth of style through copying, cutting and remixing.

My hope is that you and a few friends will read these aloud, as if they were a songbook with shape notes. Pop open a bottle of something, and say these words. Or just as I did, read them slowly—with your mental director filling the stage with performers, lights and sound.