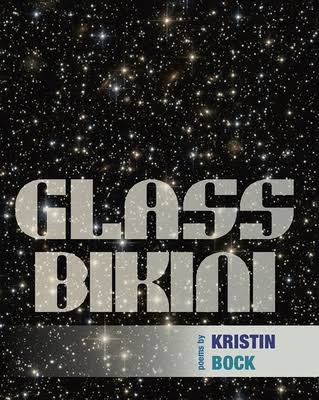 “I’m thinking of writing a book of folktales from the future…”
– Kristin Bock, 2008

Have you heard the one about the snowman who cried tears of fire, his daughter exiled for her kindness and sent to live among the moose? How about the party where the mother was turned inside out, impossible to hold? That one gets everybody laughing. Have you heard the one about the interplanetary traveler, who falls in love with the co-pilot only to discover she has become a bird? A tragic tale since loving birds is explicitly against the rules. Certainly you’ve heard of Alice down the rabbit hole, though I’m guessing no one told you of her MMA fight against the president. Or what about the monster who stays healthy taking ratfish oil, the monster with cauterized fins, the monster with a hole in its belly where the soldiers gather to stare at you?

If you have never heard such tales, then you have yet to enter the time travel device that is Kristin Bock’s Glass Bikini. A device with many settings, it may have you wondering whether it has brought you to the future or brought the future to you. Are these the monsters that await us or the monsters that each day seem to multiply across our present streets and screens? Which side of the looking glass are we on?

​             Perhaps, as in Mary Shelley’s Frankenstein, one of Bock’s many touchstones, these are monsters of our own design, revealing to us something of ourselves. “Before Birds,” the first of five sections, begins fittingly with “Creation Myth”:

First, the armature, thick cable for legs, thinner for the trunk, arms, and
head. The ideal monster is 8 hands tall. A fashion monster, 8-1/2. A heroic
monster, at least 9. Now, ask yourself, what would you like to make and
how big are your hands?

Yes, the choice is yours, but every option is monstrous—something big and destructive is looming. We are hindered, it seems, not only by a lack of capability, but by the limits of our imagination. The act of creation is a high-stakes game; refusing to break the tension, Bock’s deft humor reminds us to be worried when the speaker later demands that we “Laugh a nervous laugh.”

Proceeding from its Pliny the Elder epigraph, “a monster preceded by a monster” (as Google translates from the Latin), each poem in the first section is its own creation story or apologue—here the time machine hovers high, offering a broad introductory view. Bock’s predilection for the prose poem works especially well for this sort of world-building, adding to the fable-like quality. In one piece that recalls her “forever teacher” James Tate, readers learn that “after the extinction of whales, babies were born in pieces. / Lungs, feet, spleens all separate and in heaps,” eventually leading to rabbits taking over the world. If this sounds like some sort of cuddly paradise, do not be fooled: the subsequent poem warns of “Bunny Woman” who may have a bomb in her fur—“As if you can no longer trust the friendliest/ places on the planet.” Elsewhere in the section, the aptly titled “Everything Coming Up Rifles” leads us through a threatening geography: “All the crosses/ in the graveyard are rifles. The church bell’s tongue is a long, black rifle.” Is this a beautifully sinister extended metaphor or a literal landscape of weaponry? The world of Glass Bikini invites both readings.

What to make of the speaker of these poems, at times guiding us by hand through the strange terrain, at others banishing us to watch from afar or even forgetting us entirely? The collection shifts effortlessly between points of view, giving population to the wide world around us. In the second section, “The Inside-Out” weaves through first and second person, drawing readers in with one long opening sentence:

Sometimes, that dark specter we imagine loving us back through all the
years grows so heavy inside, it’s hard to carry around, hard to bear through
the dream of the inside-out, where the wind whistles through the bones
of birds choking on their own feathers, on all that once lifted them up and
out, the dream where your heart finally grows so large it breaks through
bone, muscle, sinew and skin to recollect whole and wet on the outside.

Alternatively, poems in third person allow readers to step back and stare on in wonder and horror as the collection grows more menacing. The story of an animate doll explains “How Drones Are Born” when “Blades / sprout from her neck and she ascends into the cracked clouds.” “Field Trip to the White House” recasts the Gingerbread Man as a “towering cookie” who “chases the children. Its high, booming laugh echoes/ down dim corridors.”

More intimate moments arrive in singular first person. From well-placed persona poems in the third and fourth sections, a certain melancholy emerges. A corpse with a gift for sonics sends a “Postcard From the Coffin”: “Everything was fine until the flood. Now my suit is ruined, caked with/ mud, especially the buttons, which I love.” Readers are audience to an employee at the Dollar Store, an unwilling robot, an unspecified president dreaming of torture—the latter almost winning our sympathy, relating that “When / the monster kissed me, I felt its dream in my mouth like so much water. / Like so much blood.” In other poems, the “I” remains anonymous, and we are left with a feeling of unspecified trauma, as in “My Father’s Chiaroscuro”: “Each day, I watched him paint the porcelain doll. [...] I wanted to hold her. [...] I was still a / child when I came to understand my father’s long shadow at the close of / day.”

Is this the poet herself reaching out to us? Through its shifting perspectives, Glass Bikini refuses such a simple reading. There is an overriding sense that the speaker from poem to poem, even within a poem, could be anyone—often to frightening effect. In “Barn Burning,” powerful enjambment across couplets enhances a tone of foreboding:

I was sixteen, driving
home from sweet wine

and fucking in the far fields.
When I opened the door

to the burning barn,
my lips, raw from kissing,

stung, swelled from the heat.
I was the devil

staring
from the edge of the woods…

Again we are left questioning what is real and what is metaphor—is this a human speaker with “long red hair / snaking in hot wind,” or Satan himself, who, as the previous poem tells us, “takes out the garbage of the world”?

Some of the most powerful, the most thrillingly alienating moments arise from Bock’s expert use of the imperative. What begins as a timid garden scene in “Compound” quickly turns menacing, the commands coming down like lashes:

Hide in the bushes. Wait for the little black stars to squeak
by. Step on them. Stamp on them. Some will feel like urchins under your
feet. They will whisper terrible things. Step on them harder. They will cry
out. They will have your mother’s voice. Run. Catch the stars and squeeze
until they burst.

A softer hand deploys the same technique in a later poem, where readers learn that “Belief Is a Default Setting” in the monster-making process. “From cadavers, grow new body parts,” the poem begins, recalling the “Creation Myth” of the first section. After re-animation, it continues:

Feel a lack of control. See patterns in static, patterns in
the stock market, in toast, in clouds, in invisible princesses. See meaning
where there is none. Sense something ugly and festering in the heart of a
friend. When there is none.

This recalling and looping back—from techniques to characters, scenes to phrases—is one of Glass Bikini’s joys, a trail of breadcrumbs you hope is leading away from the witch’s cottage. Stops made by the time travel device along the way. If you step out and find yourself in an uncertain present, an unknown world, you will at least have learned a thing or two about monsters—those that preceded us, those we create, those we hope to slay lest we become.
Benjamin Grimes earned his MFA from Randolph College, where he worked on the literary magazine Revolute. He writes poems and letters from his home in western Massachusetts. Recently, his work was published in New Ohio Review and he was named a finalist in the Sewanee Review Poetry contest.
Spring 2022