Revising the Storm by Geffrey Davis
A Review by Jacob Victorine, Book Reviewer 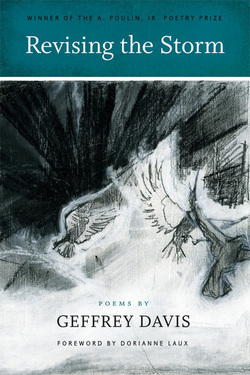 I hadn’t read a single one of Geffrey Davis’s poems before picking up his debut collection, Revising the Storm, winner of BOA Edition’s 2014 A. Poulin, Jr. Poetry Prize. This is strange considering the Internet presence of poetry (I am, after all, writing this review for an online literary journal). In the case of Revising the Storm, my ignorance—coupled with the praise-filled blurbs that adorn the back cover—left me anxious before ever arriving at the table of contents. How can any piece of art, let alone a poet’s debut collection, survive this type of hype?

It can’t, which is why I was initially disappointed with Revising the Storm. My astronomical expectations coupled with Davis’s cryptic syntax and elongated metaphors left me feeling, at first, like the book obscured meaning through language, rather than creating it; in fact, I questioned whether it was worth a second read. But this is (one of the many reasons) why I love reviewing books: it forces me to be a better reader than I might normally be. Instead of dismissing ­­Revising the Storm, I pushed through its pages, discovering that its emotional depth corresponded directly with my own willingness to dive deeper.

Davis’s language winds and branches like water rolling down a dirt hill. His style of writing is a stark reminder that the most fulfilling art isn’t always the easiest to understand. Just as the writer sometimes struggles to craft the poem, the reader must sometimes struggle to decode it. Like Kendrick Lamar’s, good kid, m.A.A.d City—which I nearly dismissed as another cliché post-Gangsta Rap album, but now cherish for the way Lamar’s hypnotizing flow unfolds the protagonist’s lifelike narrative--Revising the Storm is another brilliant debut that intricately weaves language and memory into the narrative of a young man’s journey through childhood trauma.

“What I Mean When I Say Farmhouse” introduces the collection’s obsession with memory by pointing to the act of remembering itself: “Time’s going has ebbed the moorings / to the memories that make this city kid / part farm-boy” (1-3). With the poem’s first lines, Davis hints at the role memory will play throughout the collection, and the way it can move through time and the mind as fluidly as water. The poem continues to introduce a number of the collection’s themes, including the speaker’s childhood trauma as he walks “…back among snakes like slugs wedged / in ankle-high grass, back inside that small eternity spent searching for soft ground” (6-8).

I’m not sure I’ve ever read an opening poem that offers so much, while saying so little explicitly. After highlighting the importance of memory earlier in the poem, Davis suggests to the reader the way it will operate: “Each shift in the winds of remembering renders me / immediate again, like ancient valleys reignited / by more lightning” (12-14). Here, his lines and their breaks move like a wave, rising and falling, but never staying in one place long enough for the reader to fully capture. Davis dances around memory’s function as a time machine we can’t control, to bring us back to the ones we love but have lost. This, like for many of us, is the speaker’s situation:

[…]And my father
walks along the tired fence, watching horses

and clouds roll down against the dying light--
I know he wants to become one or the other. (21-24)

The ambiguity leaves room for multiple crucial meanings. Does the speaker’s father want to be a horse or a cloud? —Two things that like his father, as we come to learn later, move often and are hard to control. Or does his father want to be the dying light? —Something that will no longer be visible to the speaker’s eyes or his mind. Davis smartly refuses to editorialize, yet the speaker does tell us why he returns to them: “I’ve come / to write less fear into the boy running / through the half-dark. I’ve come for the boy” (26-28). Both Davis and his speaker understand the power of writing: how it can change the past, even when the body can’t.

Almost all of Davis’s poems deserve rigorous explication not because they are complex for complexity’s sake, but because of the many meanings and emotions they hold. In fact, their intricacy and sharpness caused me to question my role as the reviewer while writing this review. Is there a danger in explaining too much, thereby interfering with a new reader’s experience? Or is it more important to explicate the inner-workings of a book in order to show its brilliance?

For this review, I settled somewhere in the center. Poetry, for me, is ruined without mystery—sometimes, you really can explain too much—but Davis’s writing also holds so much under the surface that it would be a disservice not to dive in on occasion. The extended metaphors in Revising the Storm are superb. Davis demonstrates the incomparable ability to transform humans, animals, and even weather into totems that mark the road through his poems.

In “Unfledged,” the speaker recalls the weekends he and his brother spent helping his father roof houses and how, “During those hard, / gloved hours under the sun’s weight, I studied / my father from the ground” (6-8). Throughout the poem (and much of the book), Davis uses precise diction that casts the speaker’s father as a pigeon, drawing parallels between his absenteeism and the bird’s literal flight:

from below, as he perched and drove nails through
the day’s heat, I checked the silhouetted length of his back

If the ache could be found, you’d know
How to start soothing, where to place your hands. (25-30)

Much like a pigeon, the father is “perched” (25) on the roof, where, from below, the speaker can see “the silhouetted length of his back” (26) and “impossible arms” (27), characteristics that call to mind tail feathers and wings. But Davis does not merely draw parallels through appearance: the speaker perceives his father as a pigeon and also relates to him as one as well. The speaker wishes to raise pigeons so he can soothe his father’s small body in his hands, despite knowing he can never truly hold onto him. Davis writes: “the careful study we do / with things that refuse to become ours” (17-18). In fact, this is what Davis’s speaker does throughout the book as he immerses himself in past trauma—from a miscarriage to divorce to the absent father whose shadow never fades—in hopes of changing it or, at least, making sense of it in his own words.

With all of the brilliance packed into the first section of Revising the Storm, I shouldn’t have been surprised that the rest of the book would be a letdown. This is not to say the second and third sections don’t contain shining moments. Poems such as the “Newakum River,” “What I Mean When I Say Diaspora,” and “I Dream of Meeting Myself, Age Seven, County Fair Field Trip,” offer the same inventive language, the same stunning metaphors and emotional currents that are staples of “The Book of Father.” In “I Dream of Meeting Myself, Age Seven, County Fair Field Trip,” the speaker imagines an encounter between past and present selves. Davis writes: “How dearly I want to give you / the gentlest version of my voice, say something / to suspend your belief in disasters” (9-11).  It is a desire almost all of us have had: to travel back in time and save our child-selves from the traumas they are dealing with, the traumas we know are still to come. But despite all of the speaker’s gifts for making sense of the past through language, he cannot help his younger self eat better or stop “our mother crying in the kitchen” (14). He can’t even leave his younger self with a few words of advice.

Yet despite standout poems, the rest of the book lacks the tightness in metaphor and narrative that make the ones in “The Book of Father” transcend their individual strengths and weakness to become something greater. Call it threads woven into fabric, gears synching to turn a clock—the metaphor is unimportant. What matters is the way Davis’s poems coalesce to create a world the reader falls into, a world so real that I mourned it when I left.

Unfortunately, I didn’t feel this way about the rest of the collection. And I wonder if this is less to do with Davis’s writing, and more with the structure of the book. “The Book of Father,” spanning twenty-eight pages, is nearly as long as the rest of the collection (thirty-four) and avoids stand-alone poems like “If the Moon Were My Lover,” which develops exactly as its title suggests and seems like filler beside Davis’s more tightly woven poems. If Davis had reordered the poems or sectioned them differently, I might have become immersed in the entire book, instead of only one of its parts.

Yet I still read Revising the Storm again and again. Its imperfections do not negate Davis’s talent: his gift for metaphor and movement, the way he puzzles words together but leaves space between them for emotion to rise through the cracks. In “Divorce Means” he writes: “Our moments / remain infinite for having happened” (15-16). As its title suggests, Revising the Storm is a book that speaks through the echoes of trauma; like Christopher Nolan in his seminal film, Memento, Davis multiplies fragmented memories to make something haunting and greater. Davis acknowledges the writer’s ability to shape the past, even if his speaker—a man trapped by memory—can’t.