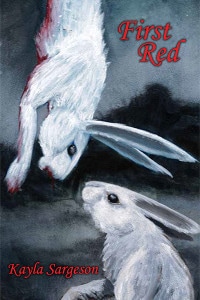 Kayla Sargeson’s debut full-length collection, First Red (Main Street Rag, 2016), is many things: elegy for dead friends, bedroom confessional, punk rock manifesto, but most of all it is fierce. I say this as a friend of Sargeson’s, but more importantly, as a book reviewer who believes in the fire in her poems.[i] Sargeson immerses the reader so decisively in the grit of life that a familiarity with it isn’t necessary to feel gripped by her poems. Much of the collection sets itself in cities, such as Pittsburgh and Chicago, known for their hardscrabble nature, and the honesty and edge associated with these places rest at the heart of so many of Sargeson’s lines. One of the book’s early offerings, “Pittsburgh, Winter,” thrusts the reader immediately into a harsh environment, as Sargeson’s speaker recounts a family altercation:

My father grabs my stepbrother by the throat
for calling my stepmother a bitch.
My father says he does this because he loves my stepbrother,
wants him to be a good man. (1-4)

This level of violence, especially in the way it relates to love and family, can be jarring, even shocking, and many of Sargeson’s poems show a fascination with—if not a flat out attraction to—taboo and/or disturbing situations. Yet, Sargeson’s poems do not rely on shock in order to move the reader. Sargeson’s reporter-like nose for the details and visceral use of images help create a world that feels disturbing in the way life often is, and her speakers share these attributes: “I’m stuck on the details of living: / the sound a 13-year-old boy makes when he’s shoved against a wall, / the Pittsburgh graffiti artist who sprayed ‘help’ on concrete” (10-12). It is these “details of living” that make Sargeson’s poems so touchable, so real. While some poets mistakenly aim for universality and end up with abstraction instead, Sargeson understands that truth often lies in the sights and sounds of daily life.

Like many of Sargeson’s poems, “Pittsburgh, Winter” considers the layers of trauma that people, especially women, experience in numerous facets of their lives; her speaker bravely recounts painful experiences that many women struggle, sometimes out of fear or shame, to come forward with. Sargeson seems to know that these traumas cannot always be explained or reconciled, sometimes they must simply be laid bare: “A friend has been sending me pictures of his cock,” writes Sargeson, “and I’m wondering if we’re still friends” (14-15). Instead of these lines simply feeling like a snarky two-liner about dick pics, they manage to capture the privately aggressive interactions women too often experience with men who claim to care for them. If Sargeson’s poems feel shocking, it is only because they show a willingness to unfold experiences that so many of us keep tucked away.

Unsurprisingly, Sargeson is a disciple of Jan Beatty and it shows throughout First Red, both in the title—which is reminiscent of Beatty’s book, Red Sugar—and in the aforementioned way in which Sargeson’s speaker, like Beatty’s, unflinchingly undresses trauma; the poem, “Dear World—,” which, in many ways, acts as the spine of the collection, is another example of this. Centered at the literal midpoint of the book, the multipart poem unleashes a string of heartrending, sometimes ugly, declarations, beginning with the name of the speaker’s rapist:

I told my rapist I wouldn’t tell
but I did
and he got kicked out of his fraternity
after raping another girl.
His name is Ross Kulinski.
I haven’t spoken his name in over a year.
I don’t forgive him.
They said it was my fault. (1-8)

This type of candor—especially in regards to the dialogue around rape—seems rare, both in life and in poetry, and pushes to break the fourth wall. Although, in this case, I don’t know whether Sargeson is writing from experience, these lines feel brave in a way that gives them truth. By naming her rapist and acknowledging that she hasn’t “spoken his name in over a year” (6), Sargeson’s speaker reveals the push and pull between shame and avowal that seems to be part of the lives of many survivors. And the speaker’s refusal to absolve her rapist dismisses the societal expectation that women should forgive the people who have harmed them; this, in itself, is a significant act of resistance.

Sargeson’s poems are fascinated with people often categorized as counterculture, as oddballs, as freaks—from Ozzy Osbourne, to Nancy Spungen, to Frida Kahlo, to the “Woman with the Longest Fingernails as Determined by the Guiness Book of World Records, 2008.” Both Spungen and Kahlo receive a series of epistolary poems scattered throughout the book. In “Frida Kahlo, Punk Hero” Sargeson writes: “There are times I get so lonely I can’t breathe. / I’ve spent years practicing your punk face in the mirror: / you stare straight ahead, never smiling” (27-29). Much of Sargeson’s fascination with figures like Spungen and Kahlo seems to come from their opposition of patriarchal ideals. By refusing to smile, both Kahlo and Sargeson’s speaker protest the societal expectation that women appear pleasant and appeasing. Like Kahlo’s famous unibrow, Sargeson’s poems and speakers are anti-pretty, which doesn’t mean they aren’t beautiful, only that they follow the punk ideology of rebelling against oppressive standards, especially those placed on women.

These moments, in which Sargeson’s poems engage counterculture or taboos, often feel performative, but rarely inauthentic. There are, however, occasional moments when poems feel too intentional, too concerned with shocking the reader. In “Cock Gun,” the speaker asks: “Do you pull at her long blonde hair when you come, / shooting your load like bbs from a cock gun” (18-19)? But, more often than not, these moments seem to test the reader to see if they are fearless enough to be a witness—like Ozzy Osbourne biting the head off a bat to open one of his shows. The poems seem to ask, “Will you stay even when things turn ugly?” This proclivity for testing the waters feels intertwined with the physical, psychological, and emotional traumas Sargeson’s speaker survives. In “Dear World—,” she confesses:

I dated a woman named Kate
who loved gin and dancing,
but wouldn’t admit to being my girlfriend.
I never got over that. (67-70)

Like all of us, Sargeson’s speaker craves love and acceptance; like many of us, she seems to grow thicker skin with each wound, yet wants someone loving and fearless enough to peel away those layers. “My psychic friend Bobby said that I’m going to get married. / I’m looking for someone who can handle it when I say fuck you, / someone who talks back” (53-55), the speaker continues. Arguing can be seen and experienced as a form of aggression, but it can also demonstrate commitment—a willingness to stick it out despite harsh words and hard times. Sargeson’s speaker understands that someone willing to push through vulgarities may also be willing to see her for more than her body and the way she adorns it, for more than what she has survived.

In the end, what makes Sargeson’s poems so compelling is the way they refuse to sacrifice tenderness for their punk snarl, and vice versa. In “For Nate, January 17, 1986—May 15, 2014,” an elegy for Nate Breitling, a fellow poet and friend who was found dead of unknown causes in an Uptown alley in Chicago, Sargeson writes: “On the Brown Line you told me to kiss you, / didn’t bother to wipe my blue lipstick from your mouth” (11-12). The speaker’s lipstick is a literal mark of her rebellion and, by refusing to wipe it from his mouth, Nate offers her a physical gesture of recognition. Like all of us, Sargeson’s speakers find the most joy in these moments: when they are seen, even loved, for their idiosyncrasies, and not in spite of them. Yet, despite the visibility the speaker feels, she lacks the courage to risk physical affection in the way she desires most: “I wanted to hold your hand but was too afraid. / Your black and white tee the last / thing I saw you in” (14-16).” The book reviewer in me wants to point to the subtext in these lines: the black and white tee as a punk symbol, as a metaphor for Nate’s death—how memory can make the lives of dead loved ones turn gray. Yet, what sticks with me most is Sargeson’s bravery in acknowledging weakness, in showing that, sometimes, even the most defiant of us are afraid.

[i] Full disclosure: Kayla and I were a year apart in the MFA Creative Writing-Poetry program at Columbia College Chicago a few years ago and still maintain a friendship despite living in different cities.
June 2017