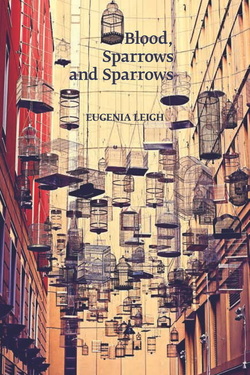 “If you need to run, run” begins Blood, Sparrows and Sparrows (Four Way Books, 2014), Eugenia Leigh’s searing debut about the trauma of memory and complicated ways we must liberate ourselves from the past. Throughout the collection’s four sections, the speaker runs—not away from, but back into the arms of her demons and the vivid and excruciating details of childhood. She reclaims her life by breaking it open, collecting fragments of trauma and memory, and reshapes them into something more real and whole.

The collection is God-haunted, the confessional and lyric modes circling around the interrogative as the speaker questions, not whether God exists, but what kind of God he is. The questions posed to this God are ones that might be asked of both the reader and the beloved: how can we be seen as we are—damaged and flawed creations--

and still be loved? “Wire Hangers,” a fierce and tender litany, feels like the emotional anchor of the collection, asking simply and painfully: “When you hold me, will you hold only my cocoa-buttered/ skin or will you hold my mother’s callous feet, her cigarette stained apron?”  The lines repeat—including histories, cities, containing the multitudes of meaning and memory that reside in the body.

Leigh’s lyricism is refreshingly surreal, mystical, and grounded in the body. The lines move quickly, undulating like the formation of a flock. In “Contrition with Liquor,” the sparse and gorgeous descriptions give texture to the archetype of a bad relationship:

from my liver. Flush my mouth
in sinks of cold light.

The surrealism is often blurred with a frank depiction of the physical world, sometimes so straightforward I laughed out of delight, savoring the wonderful strangeness of “I could fondle an artery” (“Departure”), “A rat yawns near a beer can,” and “she was God’s shitty draft” (“Blood, Sparrows and Sparrows”).

Some of the most exquisite lines are flung haphazardly into poems. In “Half Glance” a photograph from an ex is described as “A ghost of nicotine in the folds/ of an envelope.” Or in “The Deposition”: “My father’s voice full of boils.” Rather than lending imagistic or emotional weight, the lines leave a residue, their strangeness accruing throughout the collection, evoking a sense of other worlds or a simultaneous universe.

The strongest images are often the most simple and concrete, anchoring emotionally intense moments with details like “half-eaten margarine and jam sandwiches/ my small sisters and I assembled/ on the carpet” (“Between Heaven and the Bedroom”). In “Impossible Questions” the speaker imagines what her mother packed the night she left her family:

I want to know…

Whether she left her hymnbook
and took a comb. Whether she packed a sandwich and took
the time to spread mustard on both slices of bread.

The accrual of these fragments and details amount to something less obvious than what we might expect. The collection is full of wasted beauty—sometimes the lines feel intentionally discarded and undermined by lesser lines. And yet the wasted, fleeting beauty is not a testament to life’s meaning but rather to its absurdity: “a photo of arbitrary/ minutes” (“Half Glance”). The point the speaker seems to be making is that we survive not for moments of meaning but for the freedom inherent in its meaninglessness, the meaning that we create: “To worship is to survive is to be// wholly human, wholly/ gripping the other hand” (“Selah”).

The collection painfully and beautifully expresses the voice of a daughter coming to terms with the broken father, battling with desire to be free and survivor’s guilt: “I don’t eat because I wonder whether my father remembered to feed himself.” The tenderness of these lines counters the other depictions of the father in which he abuses, kidnaps and destroys what he loves.

The story of trauma and healing is complicated, one that Leigh treats with compassion and clarity, allowing room for ambiguity and mystery. Resolution is never forced and the wounds gape open. In “We Called it the Year of Birthing,” we see that every experience has been a gift, an opportunity for transformations: “God handed me a trash bag bloated with feathers. Turn this into a bird.”  The poem is perhaps the most hopeful moment in the collection, offering an anthem for survival:

When beaten hard enough, some people scamper into corners
sordid with similar beaten people/ Others of us--
the stubborn, unbreakable humans—weld our wounds
to form tools.

In Leigh’s world, survival doesn’t mean absolution or release but the ability to create something new. Imagination is a tool for liberation, allowing the speaker and characters throughout the collection to endure; prepared to make something more powerful than the retelling of tragedy, as in the collection’s last line (“The Happy Couple”): “For now, we sing.”