NO IDEAS BUT IN CLITS
A review of Elizabeth Hall’s I Have Devoted My Life to the Clitoris (Tarpaulin Sky Press, 2016)
by Claudia Cortese, Book Reviewer 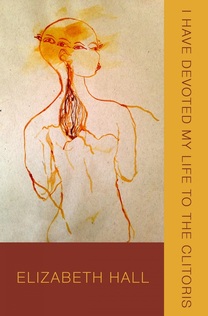 ​1) Hall’s book is not history or feminist theory; not art criticism, poetry, memoir; not anatomy, psychology, theology. It’s a 63-page list detailing what happens when one woman decides to read everything she can about the clit. She doesn’t find as much as expected, but what she unearths speaks louder than a whole library of research.

1.5) Okay, I lied: this book is history, theory, art criticism, poetry, memoir, anatomy, psychology, even a dash of theology (well, anti-theology). I Have Devoted My Life to the Clitoris is a bulleted list (yes, as you may have guessed, this review mirrors Hall’s structure) that tosses the reader into an interdisciplinary whirlpool circling one small nub.

2) “If a women orgasms clitorally in a forest and no one is around to hear it, does it happen?,”  asks Hall after detailing feuds among scientists over who “discovered” the clit. Clearly, maidens had been rubbing till they gushed; clearly, people had been searching out that special spot with their tongues; clearly, women have always had clits.

2.5) Fun fact: one of the scientists in this feud was named Columbus, not Christopher but Renaldus, though the two Columbuses were contemporaries and both had a penchant for claiming to discover who and what was there all along.

3.5) a title so delicious, it deserves its own line. A title so terrifying, Tarpaulin Sky can’t say the book’s name on Facebook or the site will remove the post.

4) Hall sought to uncover everything she could about the clit, which, it turns out, is not so small after all. [See HERE for a diagram of the full clit. This image of the internal clitoris was published in 1998, which means it’s been less than 20 years since we realized the full extent of the clit]. Hall found “no museum exhibits,” no “Famous Clits in History,” no “Clit Monologues.” Instead, she had to collect “berries, buds, bits of string.” In other words, the clit—the only organ that exists for the sole purpose of pleasure—has been neglected for a very long time.

5) “When I gaze deep inside a pussy, that’s all I see: a pussy. As Gertrude Stein might have said, a clit is a clit is a clit.” When an orange man with tiny hands recently boasted about grabbing women’s genitalia, it may have seemed as though his reason was akin to Hall’s: he wanted to gaze deep inside what she lyrically describes as “not a deeper red, but a heavier one . . . a bright seam of purple flesh throbbing along the lips.” But no. For him, a pussy is not all that he sees; for him, a pussy is an extension of the woman attached to it, and his grabbing is more than gesture—it’s assertion of power.

6) I want to read Hall’s book on the subway, in a hallway, at a coffee shop—anywhere someone can see the jacket. 2016 may well be renamed the Year of the Pussy, which means that yet again, our bodies have been politicized. I want passersby to see me reading a book that charts how women have been hidden in plain sight for centuries, which is what this volume is ultimately about (well, that, and also porn and the poetry of the pussy and anti-rape clits: more on that later). We have been both everywhere and nowhere at once. Our bodies have been displayed and desired and debased, while our particular traumas and particular pleasures have been erased.

7) “The rhetorical form of clitoral theory is synecdoche, the ‘detail-figure,’ where a single part, or aspect, refers to the whole.” The clit does not symbolize woman but, rather, stands in for woman. The key difference is bodily: the former floats above the flesh; the latter forms part of the flesh. Hall claims that the clit’s desires have been made to symbolize God, transcendence, mystery, a woman’s psychological state, nature and what it means to be natural, the “correct” role within the gender binary, and on and on. Fuck that. Hall demands, in a more restrained tone than my own, that we unhook that “blister of pleasure” from its superfluous meanings.

8) Detail and silence are Hall’s M.O. She asks readers to reject theories about women’s bodies—both those that exalt and degrade—and trade them for detail: details from a variety of disciplines, as well as from our own experiences. Because this book is written as a bulleted list, between each point is blank, white space, which creates silence that lets readers insert themselves into the text. This then leads to even more detail diffusing throughout the book. There are over three billion pussies on the planet, Hall notes. Like snowflakes, each is unique, so our pussy’s stories are not only more important but also more true than the generalized ideas about them.

8.5) When I saw Elizabeth Hall read, she said that a man at another event had shouted, “YOU DON’T KNOW WHAT YOU’RE TALKING ABOUT!” and stormed out of the room. Well, clearly Hall does know what she is talking about, not only because she has done a shitload of research and written a really smart book, but also because, uh, her body, the female body, is the subject. When telling this story, Hall seemed both amused and proud—proud that she had elicited such rage, proud that the heckler had corroborated what her book revealed: the fear that one tiny flap can elicit, which is the terror that a woman’s body is not analogue to a man’s, that to be unknowable is to be unreachable and thus free.

9) This is the age of autotheory, embodied history, hybridized writing, and thank god for that. This book’s foremothers are Maggie Nelson, Gloria Anzaldúa, Jenny Boully, Eleni Sikélianòs, among others, because how could humans whose bodies seem to be the eternal objects of dissection ever abstract viscera from theory?

10) Hall’s fidelity to pleasure and the poetry she uses to describe her body (“my cunt pressed to the skin of the city”) braids throughout the book. Hall’s tone can be somewhat clinical, though she never neglects lyricism. In fact, her distance creates space for rage. By sometimes presenting moments of violence without comment, she empowers readers to have whatever emotional response they would like.

11) This book converges at the intersections of various genres and identities. This is not another white feminist book about the body. Towards the end, for example, Hall places the West’s critique of clitoral surgeries in the larger context of colonialism and racism, as well as connects this critique to the pervasiveness of sexual violence in imperialist countries.

12) Here’s my advice to every reader of this book: let its smarts and its sensuality buzz through your body. Don’t worry about story or linearity. Though there are moments when the book maps historical developments, the book is more circular than direct. Scraps from various disciplines orbit our sun, the clit, and between the bulleted scraps, the space to insert yourself. So, remember the moment you slipped a CoverGirl compact between your legs and looked for the first time. Remember when touch is all you wanted. Also remember when it wasn’t touch at all but the smell of burning leaves or the texture and flavor of a new idea (“The brain does jizz”) that titillated you. Let yourself yelp while reading. When I learned that spotted hyenas have sex through their clits, so penetration “requires a great deal of patience and precision” and “forced copulations are impossible,” I scrawled ANTI-RAPE CLITS!!! across the margin and texted my bestie, “OMG, dude—hyenas have anti-rape clits!” with knife and tongue emojis punctuating my excitement. Yeah, this is that kind of book.