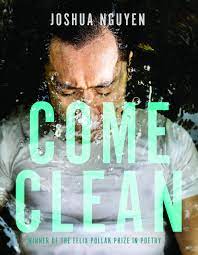 “How much of me must be
Written before I am just another
Bastardized item?...
O monosyllabic birthplace
Can I self-colonize myself”
From “ A Failed American Luc Bat Responds”

Clean is a relative term. Over the course of the last few years, our obsession with cleanliness has had a direct link to surviving a global pandemic. But it has also beckoned us to a level of sterility that pushes us further into isolation by making us afraid of each other’s bodies and physical selves. However, this is not the same kind of “clean” Joshua Nguyen pulls us towards in his latest collection Come Clean (University of Wisconsin Press, 2021).

Ngyuen, a doctoral candidate at the University of Mississippi, uses the process of achieving cleanliness to explore how we collectively process trauma, grief, and self-doubt.  In a society that would rather you hold onto your dirty little secrets than face them head on in the open air, this Felix Pollak Prize in Poetry winning collection wrestles with the pain of sexual violence, culture, and self acceptance through inventive form, striking imagery, and the embracing of Vietnamese culture.

Marie Kondo’s philosophies from her book The Life Changing Magic of Tidying Up, a self-help model for tidying up your home, set the stage for a kind of reckoning in this collection. Kondo became a viral sensation in 2019 for her innovative approach to compartmentalizing and simplifying one’s life. As people from around the world considered what items in their homes “sparked joy” and which ones should be discarded, Ngyuen was finding a very different connection with the Japanese author, who he titles multiple poems after. In his poems, Nguyen conjures Kondo. However, instead of focusing on joy, Nguyen examines what triggers may hide in the things we hold onto. He stumbles upon a white shirt that conjures the memory of being sexually assaulted at the age of thirteen at a poetry competition. “My white shirt/the one I wore on the plane from Houston/with my youth team/where is my coach/ they trusted me/ to be without supervision/ no/ wait/ you’re older than my older/ brother/you’re old enough to be a mentor.”

Grief and trauma “splinter” through the collection. From early recollections of his grandmother on her deathbed to  reliving the final acknowledgement of the assault to an uncle that dismisses him, Nguyen's reference to Kondo’s strategy depicts how he has tried to compartmentalize the pain and trauma of each loss to no avail. However, the process of revisiting, of weighing each memory against itself, pulls him closer to a space of wholeness.

For Nguyen there is no easy way out from trauma. Rather,  His poem “Come Clean”, a ghazal for which the collection is named, shows readers that it is the writhing act of being wrung dry that offers a path to self acceptance—one that can be examined through multiple poetic forms.

“I said I blame my cousin, but in fact,/I blame myself. I said blame the basement, but I blame the washer”

The ghazal, the Arabic verse poem that typically explores loss and love, serves as the perfect vehicle to weigh the rinsing out of blame and shame. But this is not Nguyen’s only use of poetic form. In Come Clean, we are also offered his interpretations of the duplex, a form first invented by Jericho Brown in his Pulitzer Prize-winning collection The Tradition. The duplex form is shaped through series of couplets (stanzas with only two lines) that grows off of itself, where the first line of each next couplet mirrors the previous line (the last line of the couplet before it) and then the last line of the couplet introduces a new idea or image. In “ An Argument About Being Needy While Underneath Binary Stars”, Nguyen uses the jazz influence of the form to show how the speaker revisits his own identity like a twelve-bar blues.

“I am afraid of being a light-year
Because I fear what lies in the dark.

I fear the dark, because it can be so easy to lie.
For instance: when I said I needed some space,

I hoped you would’ve read the space
Between my breath as a cry for more attention.”

The rhythmic and remixing of the same phrase with a slightly altered meaning exemplifies how the words and their meaning can be in direct opposition, the same way someone's words and actions may contradict themselves. It is these contradictions that the speaker seeks to parse out. Whether that be acknowledging the speaker’s  queer identity or uncovering the truth of his assault,  Nguyen “wait(s) for absolution” that only comes once the truth has been flushed out of every line. He taps into a moment in modern poetry, showing us how form can make space for a myriad of diverse stories and experiences. Yet the Duplex isn’t his only experimentation with form.

More notably, Nguyen harkens back to his Vietnamese roots, integrating an American version of the Luc Bat, a native poetic form that consists of alternating lines of six and eight syllables with a rhyme scheme that renews itself at the end of every eight-syllable line and rhymes on the sixth syllable of both lines- much like the speaker, finding comfort in the monotony and familiarity of daily routine. Yet his own experimentation of living into two cultural worlds leads him to a poem he titles a “failed” version of the form (“A Failed American Luc Bat Responds”). In this trial and intentional errored poem defies the rules of rhyme and separation of stanzas. In it the form has seemingly forgotten itself in an attempt to embrace its American roots.

“Can I self-colonize myself
Be the fusion the world doesn’t want to see?”

This wondering of how much authenticity must remain to be true to one’s self pairs with the missing elements of the form opening up a larger conversation on the ways that Vietnamese and Asian culture are broken down and fetishized in American culture. This is the same kind of exploitation that we see in Nguyen’s examination of social media influencer Leela Rose posting pictures of her kissing random Asian men. Nguyen reminds us that we “have no right to this body, this pain… it is not (ours) to suck, swallow, grope, damage, or burn.” The readers are merely the voyeurs that he masterfully allows to watch as he shifts between forms. From a poem that takes the shape of his calendar to a ghazal and a pantoum to poems working in backwards erasure, Nguyen shows us the fluidity of his most honest self.
​
Over three sections, denoted by quotes from Japanese-American singer-songwriter, Mitski,  Nguyen transitions from a mere witness to the speaker’s world to a commander of it. He grows from a child in his mother’s arms into a fully bloomed adult who has “swallowed enough sacred oil” to bear the dream of his own children and be the provider of his mother’s next good meal.
& after
many failed attempts of stirring too

Much ground pepper into
The mix, I will follow through
With my ladle & your
broth.
It is his mother that seems to hold the boundaries of the only safe space in this collection. While the men in his family seem to tease and ignore him, boasting that his assault makes him more of a man, the thread of his mother’s love offers a soft place to land.

His use of everyday locations tied to her creates a spotless tapestry to play with the familiar in a new way. The kitchen serves as a sacred space to deconstruct and construct meaning, far beyond that of domestic work. Each appliance or executed recipe serves as a voice in the unburdening of the speaker’s trauma. From grinding pepper in the dark, to examining how the trash compactor seems to feed on everything, Nguyen uses the items in and around the kitchen as metaphors for the hard labor of moving beyond trauma.  This climaxes in his poem “I Don’t Trust the Dishwasher” in the final section. The dishwasher’s harsh and regimented cycles are juxtaposed against that of being “born again in the sink.” It is here that he begins to see the version of him that his mother knew all along. He finds the value in his ability to discern through his emotions to trust himself again.

“I trust my responsibility with myself.
I trust these hands of warm water”

Trusting oneself after assault may be the most difficult achievement of all. In a collection that shows how blame and shame can sit on the shoulders of the victim, it is this penultimate declaration, where the speaker arrives at a new revelation of an empowered self.

Come Clean serves as a manual on survival, self- reclamation, and living through and beyond the scars of a patriarchal and problematic world that seeks to unfold every neatly pinned  t-shirt and tucked corner. It shows us how to bear a burden too long and how to purify ourselves clean. But moreover, it reminds us that we are not the things that happen to us, but are all of the ways we rebuild ourselves after we are knocked down. Joshua Nguyen reminds us that the act of truth-telling may be an act of the individual, but it sparks bravery through the masses. We are reminded to push against the isolating safety of denial and embrace a new strength.“We can be happy on our own. And knowing this, we still choose to be with someone, which makes the love we carry more powerful.” A love that shows us that we too can be made new by the simple act of coming clean.
Deborah D.E.E.P. Mouton is an internationally-known writer, educator, activist, performer, and and the first Black Poet Laureate of Houston, Texas. Formerly ranked the #2 Best Female Performance Poet in the World, Her recent poetry collection, Newsworthy, garnered her a Pushcart nomination, was named a finalist for the 2019 Writer’s League of Texas Book Award, and received honorable mention for the Summerlee Book Prize. Its German translation, under the title "Berichtenswert," is set to be released in Summer 2021 by Elif Verlag.  She lives and creates in Houston, TX. For more information visit www.LiveLifedeep.com
Spring 2022