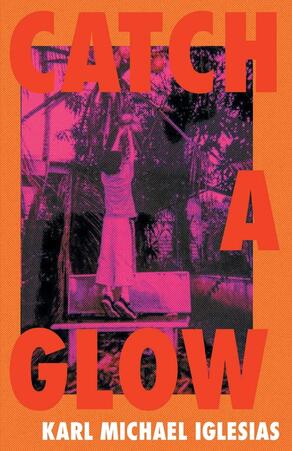 ​               In his foreword to “Nuyorican Poetry: An Anthology of Puerto Rican Words and Feelings,” the founder of the Nuyorican Poets Café, Miguel Algarín, writes, “There are no ‘alternatives’ without vocabulary in which to express them. The poet is responsible for inventing the newness. The newness needs words, words never heard before or used before. The poet has to invent a new language, a new tradition of communication.” In Karl Michael Iglesias’ debut chapbook Catch a Glow (Finishing Line Press, 2021), his poems craft a language uniquely capable of living up to Algarín’s mandate. Written in the aftermath of Hurricane Maria’s destruction of Puerto Rico in 2017, the speaker uproots, barters, presses, stalls, and sifts through the lived experiences of himself, his family members, and the larger diaspora to arrive at a language both broken and beautiful, both smoldering and electric. Catch a Glow offers no answers for the shadow of Hurricane Maria but shines light on the questions of accountability, agency, and resilience that the hurricane raises.
Iglesias’ work hinges on an acceptance of duality. In this book, hurricanes are both chaotic and summoned; water is both baptism and drowning; light is both a melting candle and grand marshal. In this way, Iglesias speaks in the language of diaspora, that which is simultaneously scattered and coalesced. His opening poem, “Sighting”, immediately explores this:

on the timing of clouds         under the veil of prophecy

“Sighting” takes on the persona of a Juracán, the indigenous Taíno name for hurricane as well as one of the hot-headed children of their god of chaos, Guabancex, showing us an omnipotent being as it details its arrival. The frogs are the people of Puerto Rico, ascended and then divided to create the current diaspora. They are placed in “rain stick”, the object that summons a Juracán. Following this logic leads us to a victim-blaming conclusion: Puerto Ricans are responsible for bringing about the very natural disaster that ravaged them. But Juracán dissuades this misplaced logic, asking itself if it’s a plague and responding “that depends on who dies”. Here, Iglesias is slyly calling into question the reader’s preconceived notions of Juracán Maria. He is reflecting the inflammatory remarks that so often view Puerto Rican’s suffering as inevitable.
Throughout its 25 pages Iglesias grapples with questions surrounding the capital T Truth of Juracán Maria. If journalistic prose approaches these questions head-on, favoring generalizations and losing the lived experiences of individuals, then Iglesias’ language stands not in opposition but as its alternative. In his poem “Left the hotel that FEMA stopped paying for on Friday,” Iglesias writes, “this is the first morning / of homelessness    making the president look / bad    my families everywhere    you see / thaliana and her son facetiming tio cruz  on the curb / sol        our grand marshall.” The line “making the president look bad” is repeated four times in the poem, both overshadowing and offsetting the detailed displacement Iglesias accounts throughout, just as the headlines did after the Juracán. Iglesias acts as a documentarian, using specific names and stories to highlight the life and death of his people.
In “Received New” “braulio died from a heart attack in the parking lot of his clinic    waiting for it to open”, in “When someone asks me if my family has power in Puerto Rico” the speaker is “not sure…who has electricity or / how long [his] cousin gordo will be / stuck at the airport    stalled and / disconnected”, and finally in “Ofrenda” “joselito has a generator that his son sent him / from florida    he has been using it to power the flood light    down the road     every evening.” In dedicating himself to depicting individual struggle, Iglesias builds a chorus of grief and destruction, never letting the whole outshine the individual.
Iglesias takes journalistic texts and bends them toward accountability and duality. In his found poem “Battered New”, consisting entirely of newspaper headlines, he offers small blocks of text, spaced out across the page. This creates a sense of isolation and hyper focus while his dynamic sentence fragmentation offers new meaning:

Juracán Maria again takes on a mythic form as a looping effect is created. Water returns even though the Juracán has ended; stray dogs follow the plague of Maria because they have nowhere else to go; Maria “struggles to rebound from” itself; electricity comes back on only to be turned off again. All of these sentence fragments put together, not only in this poem but throughout the entire book, reflect the limbo state of Puerto Rico, both before and after the Juracán. Iglesias’ verse is harrowing, echoing the perpetual turmoil that Puerto Ricans suffered through. He accomplishes this feat not only with fragmentation but through his use of sound, lowercase words, and white space.
Throughout these poems Iglesias makes language work, strike, play, and jump for him. From the creation of compound words like “sneeze-swift”, “ear-hustling”, and “joy-tumbling” to his play in “skin peeling savior spends on sights”, “the clicking of copper colored frogs”, and “seven by ten cell is sentencing policy / stench of seven-day”, Iglesias breaks open the possibilities of sound. While the content of the work is heavy, Iglesias never forgets the people he is speaking about, a diaspora that helped create musical phenomenon from Salsa to Hip-Hop. His alliteration and assonance leap off the page yet he expertly tempers this with his dedication to lowercasing and white space. Only two words in the collection are capitalized, Juracán and Maria, and almost every poem features white space between sentences and phrases. Iglesias reminds us of the oppressive silencing Puerto Ricans have experienced while paying homage to the rhythms they celebrate.
By creating a new language of diaspora through created vocabulary, fragmentation, and sound, Iglesias identifies the fluctuating nature of grief. He introduces newness in an effort to more effectively mourn the diasporic family as well as remind ourselves of the relationships we have with each other across time and space. In his poem “Evaporating”, he writes “vanishing bodies / i, in wilderness, am / dead all around me”. The speaker vanishes with every Puerto Rican death; he feels them all around him as he documents a plight that is larger than himself and yet intimately felt. Iglesias consistently comes back to nature as an apt metaphor for this complex feeling, whether it is water, juracánes, or light itself. Expertly, Iglesias does not offer the reader a final answer on Juracán Maria. Instead, he sends us into the night with these questions, armed with the light of his new language, so that we may find our own solace in duality.
Noel Quiñones is a Puerto Rican writer, performer, educator, and community organizer from the Bronx. He has received fellowships from Poets House, the Poetry Foundation, CantoMundo, Candor Arts, and SAFTA (Sundress Academy for the Arts). His work has been published in POETRY, Green Mountains Review, the Latin American Review, Kweli Journal, and elsewhere. He is the founder and former director of Project X, a Bronx-based arts organization, and a current M.F.A. candidate in poetry at the University of Mississippi. Follow him at noelpquinones.com or online @noelpquinones