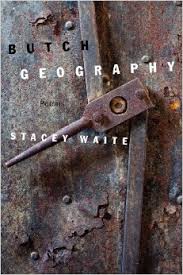 Near the end of my first year in the graduate poetry program at Columbia College Chicago, Stacey Waite headlined a reading that I was too sick to attend. The following day, it seemed all that my classmates could talk about was how powerful Waite’s reading was and how much, I, as a performance poet would have enjoyed it. Disappointed that I had missed a reader who fully embraces the stage, I comforted myself with the lines of Waite’s poems printed in that issue of Columbia Poetry Review, poems which I recently revisited in their full frame of reference, Waite’s new collection, Butch Geography (Tupelo Press, 2013).

What I still remember about that first encounter with Waite’s writing is both its straightforward language and the visceral gut punch I felt after reading poems such as “The Kind of Man I Am at the DMV.” Waite’s poetry doesn’t so much rearrange language as rearrange the reader’s internal organs. And although the poems in Butch Geography sometimes settle—whether for a too-easy simile, a singsong rhyme or a tidy ending—the emotional pull I felt toward Waite’s work never left, an impressive feat for a longer-than-average poetry collection (weighing in at a robust 64 poems).

The power of Butch Geography lies in the ripples it creates, proving that sometimes a collection is greater than the sum of its poems, calling to mind films such as Spike Lee’s Do the Right Thing. For all the brilliance Do the Right Thing contains, its true genius reveals itself off screen in its ability to spark open discussions of race and class in ways the film’s characters often avoid. Butch Geography is less memorable for, let's say, its imagery and movement, and more for its use of persona and narrative threads, the way it creates urgent voices real enough to make the reader question experience, identity, and gender.

Waite’s writing compels the reader to examine their identity as thoroughly as the speakers do. Poems such as “About Ben” allude to how the people who surround us often construct our identity; the “I” is not simply a self-created being, no matter how much we wish it were. In the poem, the speaker recounts how, when she was fourteen, she assumed the identity of “Axl Rose-looking, piano-playing, poem-writing Ben” (5-6) in order to carry on a relationship with a girl named Janie who lived in a town three miles away. The poem painfully explores how definitions shape, even control, who we are. Waite writes:

By playing with the various meanings and conjugations of the word, “define,” Waite explores the physical limitations of masculinity—how dominant American society does not only define a man by action, but also by anatomy—limitations a teenage Stacey tries, but fails, to break beneath the mask of Ben. “She was asking too many / questions,” Waite writes later in the poem, “…and the little bullets beneath the ace bandage wrapped / around my chest were ready to fire forth and I knew it” (17-19). The speaker’s breasts are bullets/bullet points ready to kill/mark the end of her relationship with Janie if they are discovered. And so, Stacey (Ben) ends the relationship with Janie instead of risking discovery, both demonstrating control and lack thereof. Stacey does not become Ben simply out of the desire to be him, but also out of the desire to become the person Janie wants to be with. It is a transformation almost everyone can relate to: how we change ourselves to fit the expectations of the ones we love.

An aside: for all its brilliance, “About Ben” takes the easy way out in its closing lines, choosing resolution or at least, conclusion, over the confusion and complexity Waite’s speakers experience throughout the collection: gender as an intricate constellation that cannot be identified by simply connecting its dots. “And when he / walks away from her that Saturday, he dies a little, even at fourteen. He / dies because he has lost everything,” the poem ends (35-37). I tell you this not to take anything away from the poem, but to demonstrate the power of Waite’s writing despite its imperfections. Even the lines (or poems) I didn’t connect with in Butch Geography drove me to ask questions, such as: What is the place of critique in a book review? Should I stick to the high points of a collection or is it equally important to discuss where a collection fails or could at least benefit from revision?

Waite’s speakers continue to examine identity in poems such as “Wedding Photo, 1968,” which, along with a few poems titled “Self-Portrait…”, forms one of a few series in the book, along with “Dear Gender” and “On the Occasion of Being Mistaken for…”; these recurring titles identify themes in the speaker’s life and offer the reader landmarks to track her transformation. These repetitions give the collection shape, even definition, but they are not what move me. It’s the same for Waite’s narratives: they draw me inside, but it is the questions, the fissures within them that keep me in the world of Butch Geography far after I’ve put the book down.

As with the other poems in the series, “Wedding Photo, 1968” presents a frame for Waite’s speaker to reflect on the formation of her identity, saying of her parents’ wedding: “This moment is a screen behind which our family / moves like a body, like they are in charge / of definitions, like their stomachs are not already full” (10-12). “Full with what?” I asked myself. “Words,” the poem answered; words like “husband” and “wife,” “man” and “woman,” words we don’t control, but instead, control us. The screen, like the Wrangler jeans Stacey wears in “About Ben,” is what gives the body shape and simultaneously turns it into a shadow.

“Wedding Photo, 1968” only hints at the themes, such as pregnancy, that emerge in “Choke” and run throughout the second half of the collection. The speaker declares: “I keep giving birth to identity. / And each time it holds me / by the throat until I say words” (7-9). Later, she continues:

Here, pregnancy is a form of imprisonment, whereas in later poems such as “On the Occasion of Being Mistaken for a Man by a Pregnant Woman to Whom I Have Relinquished My Bus Seat” it becomes a path to freedom: “My water will break / on the bus, and my body will have learned to speak for itself” (23-24). Dust, like a definition, is stagnant, clinging to the body, covering up its movement, its light. Water, on the other hand, is fluid, moving and changing shape no matter its name. It is this simple, but hard-won realization that frees Waite’s speaker: words may define the body, but they do not create it, they do not make it what it truly is.

This epiphany translates into action in “Gendered Offerings,” one of the last poems in the collection:

I carry this to our bed,
where each night the body
loses its memory, and
for a moment, is able to give. (17-20)

Memory, especially the early shapes of childhood and adolescence, defines Waite’s speakers for much of the book. This chain to the past imprisons all of us, at least some of the time. Can anyone escape all their parents’ expectations, all the nasty names they were called on the playground as a kid? It is only through forgetting that the body emerges as solely itself, losing all of its definitions and becoming nothing other than what it is in that moment.

And yet, in a collection determined to forget, memory seems to have played a crucial role in its creation. Waite’s writing poses the question, what is the place of autobiography in poetry? Does it matter if Waite’s narratives are factually true or only that they are emotionally honest? I read the entire collection conflating Waite the writer and Stacey the speaker, something I imagine Waite the writer was well aware would happen. And though it might be inspiring to find out all these narratives come straight from Waite’s life, their factuality is not what gives them truth; it is in the way Waite constructs speakers—the bodies Waite builds from memory—how they turn to the camera and say, “Come closer. Listen. Here is my story.”

Waite knows, as the speakers in Butch Geography come to learn, that experience is what make us who we are. This realization is what allows the voice that runs through the collection to ultimately transform. In “On the Occasion of Being Mistaken for a Woman by a Therapist in the South Hills of Pittsburgh” Waite writes: “It feels wrong to be a woman” (13) and later, “I do not speak / the language of women” (17-18). Both the speaker’s language and body are telling him he is not a woman, despite his anatomy, despite the way the therapist perceives him.

In an earlier poem, “XY,” Waite’s speaker learns from a doctor that she may be ‘“chromosomally mismatched’” (3)—a man’s genes in a woman’s body. Waite writes: “He doesn’t know he’s given me a second chance at my body: I think / about the man I could have been” (19-20). But what Waite’s speaker finally understands in “On the Occasion of Being Mistaken for a Woman by a Therapist in the South Hills of Pittsburgh” is that he doesn’t need a second chance—he is a man because that is whom he knows himself as, no matter what his parents, his schoolmates, his therapist, or anyone else says.

Waite shows that, despite what we’re told, we can make language do what we want. This may just seem like self-made comfort food for poets, but we see it executed every day in the commercials we watch, the news we read, and the laws we abide. These structures don’t simply exist, but are intentionally created by other human beings to convince people to buy, to listen, to follow. Butch Geography is brilliant—chilling, beautiful and, at times, even funny—and matters for what it does on the page, but it is more important for what it gives the reader. Waite writes with a fearlessness that defies societal norms, proving there is nothing more strangely beautiful than the idea that you can in fact define yourself.