Bury Me in Thunder by moira j
Reviewed by Irène Mathieu​ 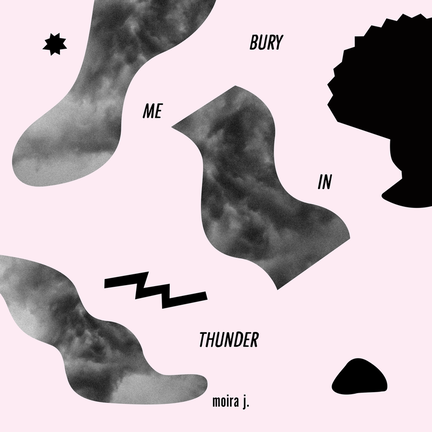 ​In moira j.’s debut collection, Bury Me In Thunder, the natural world serves both as a metaphor for difficulty and a conduit for the speaker’s rebirth, renaming, and resurrection from intergenerational trauma.

The three sections of the book are named for the parts of a thunderstorm, as we learn on the page after the dedication: cumulus, mature, dissipating. Like a thunderstorm, Bury Me In Thunder is wild, elusive, furious, sometimes meandering, and ultimately cleansing. Because the titles of these poems are so lovely in and of themselves, the table of contents is arguably the first poem. For instance, the first five poems in section II (“Mature”), are titled as follows:

The first section, “Cumulus,” catalogues “absences,” “an ocean of graveyards,” and the “broken-open body” in “a colonizer’s language” (from “A Person Born Without Lungs”). In other words, this section explicates the speaker’s origins – which lie in both trauma and gratitude – as creation myth, birth stories, lessons, and biographical poems in which the speaker is a lake, a wolf, a bloodhound. The poem “A History Lesson from my Mother” diverts from origin story as metaphorical imagery to provide specific details: “Momma likes to talk about the day / she came home from the adoption agency: / November 22, 1963.”

However most of these poems are abstract, couched in metaphors that invoke the natural world. Moira j.’s images are evocative, if at times meandering and convoluted: “Once, she filled pails with walnut shells / to dump into the troughs of the thoroughbreds, / enacting herself as both plague and refusal / to loyalty” (Mother Warhorse). This obliqueness is understandable – after all, Bury Me In Thunder tackles multiple violences, including the intrapersonal, interpersonal, intergenerational, and historical (attempted genocide of Native peoples). It feels like a way of protecting both the reader and the speaker, and in this way Bury Me In Thunder is a project of multidirectional care. That which (re-)enacts harm cannot heal, it seems to argue.

It is also Dickensonian (“Tell all the truth but tell it slant–”), and there is a self-protectiveness to this rendering of the truth. In “Peach Slices on Bread” the speaker argues, “Why do I have to tell you anything? Your ears are too hungry / to listen, even if it is necessary for you to know / about the nagging famine at our door.” Bury Me In Thunder investigates trauma without performing it. This nearly clinical eye is at the heart of the book’s power. Is violence natural? the speaker seems to be asking. The poem “Harvesting Fields of Remembrance and Alkaloids” offers a possible answer: “It is all violent / splatter from earthly / exit wounds.” If violence is assumed to be universal – indeed, a condition of earthly existence – then it becomes not a personal problem but rather a biological one. Indeed, the poem “Almanac for the Ravaged Seeds” points out that “everything here / is pristine even in its violence everything / has a place.”

This may be why moira j.’s poems include so many metaphors from the natural world. In “Harvesting Fields of Remembrance and Alkaloids,” “we scuttle like silverfish among rows / of a corrupted sunset.” In “Here is Where You Asked for the River to Name You” the speaker muses, “[y]ou asked for the river / to reverse your streams, tongue clapping backwards / like a skipping stone thrown from the lake.” Even “the upheaval of remembrance, / where memory exists, then corrupts itself” (arguably the central project of the book, as moira j. excavates memories and knowledges and remakes them, over and over) is “a thunderclap.”

If moira j.’s images often wander into extended metaphor over multiple lines, at times threatening to lose the reader, their strongest images are concise, with metaphors that cut sharply and directly. Also from “Mother Warhorse” comes this line, about the speaker’s step-mother: “She had a heavy hand / that bruised my skin without touching it.”

While “Cumulus” focuses on the speaker’s origins, the second section (“Mature”) explores the speaker’s burgeoning identity in relationship to others. This section opens with several poems that invoke the speaker’s grandparents. In “What the Hills Look Like at Night” “Grandmother found me in the kitchen, / and swept at the floor with her broom, / exorcising the temporary squatter.” Subsequent poems observe, “[y]our grandfather would have warned you, / about this world if he had not died, long before you / were born” (Bitter Bones) and “[r]emember to hide your teeth, / my grandfather says” (Before the Land Breaks).

Lovers, sisters, men attempting to tell the speaker who they are, “missing girls and women” (in “The Heredity of Hope”), and mother (who unsurprisingly was introduced in the “Cumulus” section) all make appearances in “Mature.” The most powerful character of this section, however, is a black snake that appears in “Filleting the Black Snake, Act One” and “Filleting the Blake Snake, Act Two.” Ostensibly the personification of trauma, these poems, laid on opposing pages, are visceral and uncomfortable in the way that illness causes the uncomfortable but necessary reaction of the immune system:

I am cautious to not erupt the organs,
they carry the most poison. The snake shrieks
without sound, a thumping dullness captured
like moth flailing in pillowcases, its fangs
are pierced into my calf that is dripping swollen
and caked painful, a body thrashing.
​(Filleting the Black Snake, Act Two)

The title poem doesn’t arrive until the third and final section, “Disspiating.” In it, the speaker reflects, “[m]y grandfather said that the people / here don’t know how to sing / the songs that close wounds.” This is Bury Me in Thunder’s thesis – that a book can attempt to be the song that closes wounds, a ceremony that heals as only stories can.

By the third section the collection has made peace with itself, its poems effusing the kind of acceptance that is cousin to hopefulness. The speaker admits that “despite my best efforts, God / has learned love and cruelty are close relation, / and has taken my cousins into his pack” (I Am at War with God and He Has a Missing Hand). In “Hello Tender Purple,” the speaker ends the poem by musing, “Maybe this parable for hope is useless, / but at least in this version of events, we have forgotten / hunger from the stories we eat from our shared palms.”

It’s hard to believe the speaker truly feels this hope is useless, though. The last four poems are arguably the most hopeful and, in my reading of them, some of the strongest in the book. “Below my Mouth” starts out with these delectable lines:

is a river running cold
into fields of squash and wheat,
my belly is gentle soil, upturned with hands
rejoicing in the rain that blesses them–
clear kisses from ancestors. I am white-capped
like snow and northern winds, good medicine is stowed
in my hips, for they carry the earth.

The final two poems are about the speaker’s mother, who “could not come with me” (Silver O). After all, “we can’t un-die, / can’t be un-kidnapped, can’t be un-violenced” (Some Kind of Future). There will be a future, Bury Me in Thunder asserts, even if we won’t all get there. But those of us who make it will do so because we’ve learned to excavate our ancestors’ messages and reconnect with the land around us. In this debut moira j. demonstrates their ability to wield strong metaphoric imagery that contains both beauty and violence, and their commitment to a poetic politics of care. 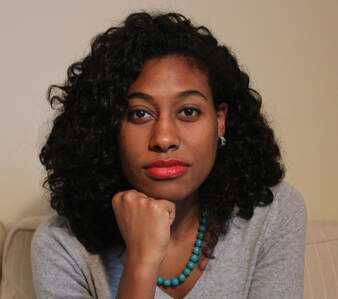 ​Dr. Irène P. Mathieu is a pediatrician and writer. She is the author of Grand Marronage (Switchback Books, 2019), orogeny (Trembling Pillow Press, 2017), and the galaxy of origins (dancing girl press, 2014). Her poems have appeared in American Poetry Review, Narrative, Boston Review, Southern Humanities Review, Callaloo, TriQuarterly, and elsewhere. Irène is on the editorial boards of Muzzle Magazine and the Journal of General Internal Medicine's humanities section. She has received fellowships from Fulbright, Callaloo, and the Virginia Center for the Creative Arts. Irène is an Assistant Professor of Pediatrics at the University of Virginia, where she serves as an affiliate faculty member of UVA’s Center for Health Humanities & Ethics.
Spring 2020