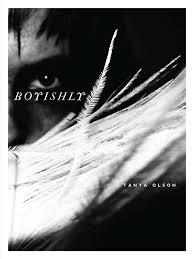 Tanya Olson's debut poetry collection Boyishly opens with a quote from Orlando by Virginia Woolf:  “He was young; he was boyish; he did but as nature bade him do.”  It's a fitting beginning, a frame through which to view this collection of love poems, folk tales, and the spaces where they overlap.  In Olson's poems, the “he” of the epigraph might be the speaker or it might be America – a young, brash, subversively masculine America, striding through the pages driven by instinct and desire, doing but as nature bids him do.  Olson's poems hint at the power of naming, the ability to become what you want to be by speaking it.  The doctrine here is not “fake it 'til you make it,” because nothing about this re-definition is insincere.  Through incantation and faith, Olson summons America neither as it is nor as it could be, but as believing allows it to be.

These are distinctly American poems, concerned with both mythologizing and demystifying a “big poem / of the story of America.”  Olson is creating new origin stories, as in “A Poem for Old John Brown,” wherein she writes:

We all walked somewhere, John Brown,
and that is not just nostalgia.  Everyone's been left one place
and told to walk to another sometime.  Don't die
while you're walking and that's when the poem
of America gets made.

The poem Olson is making – not writing, with a sense of distance and detachment, but making with sore muscles and dirty hands – is an America where giants drink peacefully in nameless local pubs, where threatened animals enact sly vengeance, where dreams, history,  and religion are the same.  This America shows itself in the deceptive simplicity of Olson's language, sparse and rhetorical, unwilling to carry more than it needs to make the journey, knowing that each word has weight.  It is economical, yet enormous and all-encompassing as the whale in “Notes from Jonah's Therapy Sessions”:

Like Jonah with his whale, this America is to be both loved and feared.  Olson's poems explore the threshold between these two emotions, lingering in the moments when one could transform into the other, as in the collection's first poem, “Exclude All Other Thoughts.”  Here, hinting at a terrible and grand mystery, the speaker explains how to subdue an animated corpse:  “Cling to it, / repeating your words to yourself. / Keep your mouth upon its mouth.”  This sense of horrified determination – of clinging to what frightens you until it becomes familiar, if not precisely safe – permeates many of the collection's poems, conveyed through unexpected, sometimes disorienting repetitions.  These repetitions and the persistence they embody imbue the ordinary stuff of history and autobiography with an aura of heroism, of obstacles overcome.

One of those obstacles is the challenge of self-definition, specifically as it pertains to gender.  The poems in “Boyishly” interrogate what, precisely, it might mean to be boyish, particularly to be a boyish girl.  In “What Else,” the speaker questions her own identity in shifts and fragments, using “boyhood” to trace a path back to the point of origin:

Here, as elsewhere in the collection, repetition elevates the poem from verse to invocation, from letter to prayer.  This boyhood is not inherent but performative, something that must be rehearsed and repeated before it can be perfected, the way Olson's poems often repeat and twist a phrase over and over again until they get it right.  This is echoed in the poem from which the collection takes its title, wherein the speaker “practiced / pulling my t-shirt on like a boy (2 arms / neck) not a girl (neck 2 arms).”  The tangible details of gender reverberate through a never-ending “boyish summer,” in which “it seemed the summer that summer / was never done.”  The omnipresent shadow of “boyish” conjures up a playful, skinned-kneed archetype “folded / in the apple tree” - but an archetype deliberately subverted, deliberately queered.

Olson's depiction of boyishness as something perpetually reached for but never fully obtained hints at a deeper theme in this collection.  Here, no one is ever quite one thing or the other; borders are constantly moving, boundaries are permeable.  This shifting consciousness is illustrated through the eyes of almost-strangers in “The Saccades”:  “The woman across the street / sometimes believes I am me, sometimes believes / I am my husband.”  Olson returns to the uncertainty of categorization in “Child of Wolves,” in which the speaker's sister, in an inversion of the usual feral-child folktale, is an animal raised to be human.  “It is to be both captured and freed / to be raised among another species,” she explains, echoing a central premise of Boyishly:  that your identity is not your destiny, but neither is it something you can ever truly escape.  Within these poems, the self, individual or collective, is always a work in progress.  In “Dear St. Gertrude,” a letter to a sanctified Gertrude Stein in the voice of John Brown, Olson writes:

As Americans
who write America, St. Gertrude,
we are astronauts made to practice
underwater as if it were space.  Help the world
to see as we have seen.
St. Gertrude, write an America
that practices belief by believing,
that rehearses for space in space.
Make us believe as the mother believed.

In this collection, Olson demonstrates the simple, enchanting power of myth, the ability to make the most ordinary people and things into legend.  The central question behind any myth must always be “How did we come to be here?” and Olson's poems find answers that are honest, if not literal.  “No one has died / or become trapped there,” she writes of her own heart.  “There is no need / to send down a canary because I am green.”  Finally, these poems are about what it means to find a home:

a world where the ground
is loose enough that it may take
new roots and dry enough so that dust
may finally begin to layer itself
into beautiful blossoms.