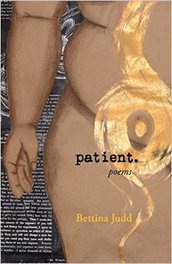 Bettina Judd’s debut poetry collection, Patient. (Black Lawrence Press), is a lucid, terrifying exploration of medical/historical oppressions of women of color interspersed with a recurrent, contemporary speaker’s narrative of her own illness. The various meanings of the word patient sift through and shape the text: patient, the person who is an object or recipient, as well as the quality of waiting. The first poem sets up the contemporary speaker as a patient/researcher, observing the rest of the text, seeking to answer the question that concludes the poem: “The research question is: Why am I patient?”  Judd masterfully juxtaposes narratives of slave women, sideshow attractions, and an unnamed contemporary “I” to illustrate the context, the weight of history, placed upon the bodies of Black women. The violence of being objectified and rendered a spectacle is chased across the several speakers of the poems in Patient.:

Many of these poems revolve around the lives of Anarcha Wescott, Betsey Harris, and Lucy Zimmerman, slave women owned by the inventor of the modern speculum, Dr. J. Marion Sims. Sims had the presence of mind to document his discovery of women’s bodies and other feats of nineteenth century doctoring in a memoir called “The Story of My Life.” These women, possessions, and patients are passing figures in the Story of His Life. I mean, you can’t make this stuff up. “Sims invents the speculum,” Judd as Betsey writes, “I invent the wincing / the if you must of it.” Or later, as Anarcha:

no baby in the canal but a new route:
fistula, with a hard f like fetal
freak, fatal, furor.

I needed the f when the break screamed
no sound from me but fire, fuchsia

Judd also spends some time in the voice of Joice Heth, a woman displayed by P.T. Barnum who claimed she was George Washington’s wet nurse. The contrast of these images is haunting, the showman and the doctor, the black woman’s body rendered a medical object or a spectacular gaff. Judd as Heth remembers Barnum knocking out her teeth, to make her a more convincing ancient woman:

My mouth stayed soft.
Soft, so I would not die

I think it is becoming a more popular posture to be nerdish, or researcher-like as a poet, but Judd executes this with urgency and fearlessness. She has none of the cute or intellectualized defensiveness that threaten research-informed poems with unreadability. Judd, or some unnamed first-person speaker in this work, remains entirely vulnerable and embodied here, as in At [the teaching hospital] For the Second Time:

No time for a room with walls
No procedure. No apologies. No
apologies all mine.

Years ago, when I first saw Ms. Judd reading some of these poems, I knew I was waiting for her book, not only because of its special resonance with me (me, the reproductive health/abortion service worker, me the emergency mental heath responder, me the employee of a racist institution which can sue and/or terminate me if I walk around calling them by name,) but because beyond the race- and gender-based inquiry in Judd’s work, Judd turns her incisive eye to even larger questions: what is the nature of having a body? The nature of pain? Of health or illness? Of help? That is to say, while it may arrive through a lens of racial or gendered experience, Patient. is a document of survival that is valuable to anyone.

Judd shows us racism’s infiltration of the most interior, the most private of arenas, the
“racist history indelibly printed on my memory” as a physical fact. While the public discussion of racism centers around police violence, inflammatory media, and incarceration rates, Judd shows us the way that this same violence is written on the insides of women, in the shadow-realm of their sexuality and power. The way that the speakers of these poems have been rendered voiceless in day-to-day life show us the juncture between intimate and institutionalized oppressions, as Judd writes, “Gynecology was built on the backs of Black women, anyway.” To undo these silences, this strategically restructured history, is the great service that Judd has undertaken. I thank her for it.