All the Rage ​by Rosamond S. King
Reviewed by C. Bain 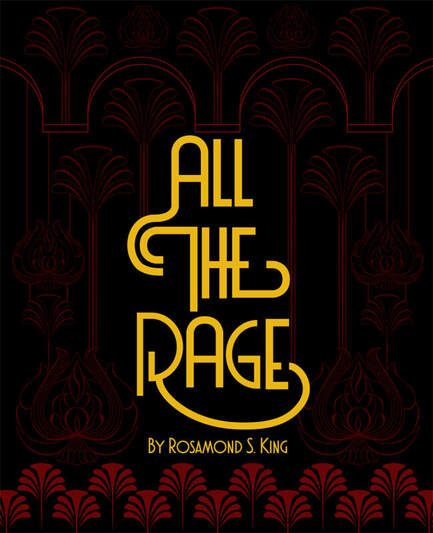 blinking through scars
into a beaming sun without forgetting
start with simple: living
is not possible
without life
-from “Letter to a Ghost”

It’s been a constant question, what kind of art will come from this moment, what kind of art this moment needs. Poet, performance artist, and literary theorist Rosamond S. King’s newest collection is a bold and urgent movement towards meeting this unmeetable moment. At once formally innovative and passionate, this collection struggles and dances in a single motion.

King’s masterful voice is no surprise: she won a Lambda Literary Award for a previous poetry collection, and has also done incisive work in nonfiction and academia. What is so refreshing as to be nearly surprising is the book’s total commitment to the present; to collecting the experience of the pandemic and racial uprising and continued racist state violence, with a specific devotion to the now. With titles like “Corona is in Queens,” “i can’t breathe now” and “Seven o’clock is just seven o’clock,” King locates us squarely in our current moment. While the moment is, of course, deeply painful, there is also an intense, affirming power in the way that this book insists on creating meaning from our present. King is offering us, in real time, a way of looking at what is happening that will not fall into passivity or mute horror. In that sense, in addition to the force and beauty of the poems, the book is also almost instructional, a grimoire (a grammar, and a spellbook) for another way of knowing and seeing. Consider, for example, the movement from sharp witnessing to imagined respite in the section “Avant Garde is a Term of War”:

Breathe. As in
to take a breath
. Synonym for breath: respiration
. Can’t. As in unable to
.
I. As in first person singular
. Homonym for I: eye
.
Everyone knows who the I is – who are we
? How big are your eyes – whose suffocation are you able to see

King’s treatment of language sometimes breaks words down into component parts; at other times interweaves, recalls and morphs the words towards new meanings. She uses anagrams and divides syllables within words, in some pieces. The technical and formal innovations are dense—some subtle, some overt. This gives the book a sense of being labored through and over, not a simple cri du coeur, but something which, despite its immediacy, has been deeply worked on, worked through. One convention of the book is that the punctuation of the prior line or sentence bumps down to become the start of the following line, rather than staying attached to what caused it. Throughout the book, the punctuation  continued to trip and stick at me, forcing the knowledge that the “end” is, actually, a beginning.

A central metaphor of the book is the abattoir, a contained arena of privation and brutality, where Black people live lives alongside their deaths, with shadows cast over the question of their humanity. This space of terror, invention, and mystery, while it is sanitized or gentrified or obscured in some moments, remains as an underpinning, even in the final sequence of more hopeful poems. The abattoir is present; it is a space we have not left. Abattoir is also a self-consciously beautiful word: it flirts with noir, with a kind of glamour that allows the speaker to shift seamlessly from the aesthetic to the abjectly violent: “we live in the most gorgeous abattoir / (From the French but better here/ . Like french fries, which make us round and marbled,” or later, in “Etymology of a Scream”:

If you’re just walking through, you mightn’t notice the ooze
. But cartwheeling in the Abattoir, our palms will be printed
with it

In order for the abattoir to retain its horror, there has to be an outside—in the vocabulary of these poems, an Elsewhere. And the unease of being consumed, being spectated—not simply the terror and difficulty of surviving, but being in an abattoir and knowing that there is an Elsewhere—pervades the book. The poems convey the moral fury of being kept in a murderous space, and of being constructed, within that space, as entertainment, while also being expected to do the emotional labor of understanding one’s murderers:

Yonder they do love our
flesh; they love it jiggling
they love it naked they
love. It. Sweating
. They love it
kneeling or prone
grinning
or weeping, preferably
all at the same time

The Abattoir morphs masterfully and grotesquely into a series of food metaphors, continuing the focus on the consumption of Blackness, in a sequence called “Blood Is The New Hot Sauce.” These poems slide between horror and farce: One piece is entitled “Gentrifying the Abattoir,” while other poems swerve between sharp witnessing and a cannibalistic tasting menu.
Much of the book is devoted to the specific injustice and horror of Black people being more impacted by COVID-19, this supposed-to-be neutral biological force. King writes, “I can’t breathe now / a double valence.” Later in the poem “Corona is in Queens,” the speaker states:

It is a testament to the clarity of the writer’s vision that through the competing traumas we have been collectively faced with, she continues to bear witness to the erased sub-narratives of women, of indigenous people, of people of color, of queers, of poor people, of specific types of survival (and death) which could otherwise be subsumed under a heading of “coronavirus” or “racial uprising” or “2020” or some other more dominating framing device. And even as she faces and articulates that specificity, the pain also becomes, at times, metaphysical:

At this point I want to directly address something about the book’s marketing, insofar as poetry is marketed or marketable: This book is being put out there as a document celebrating Black life and Black joy, and I understand that as a marketing strategy. However, through most of this book, we are witnessing violence, and doing griefwork. Most of the book is an uneasy toggling between antic and despairing moments, breaking through to a few more clearly self-preserving and celebratory moments at the end. I want to address this directly because I think on one level, it could be argued that describing this as a document of Black joy is misleading, but of course what is joy? What joy is possible without survival, and what does survival entail? Perhaps life, and therefore joy, is for some of us constituted by violence, inextricable from violence. Therefore the witnessing, the grief work, the acknowledgement, the rage, are requisite foundations for feeling anything at all.

Although the book is in many respects focused on the present, there are acknowledgements of history and context. The design and title, and a glancing reference to Josephine Baker, seem to situate our current 20s against the other roaring 20s we have in our cultural memory. The 1920s are recorded as a frivolous era—increased industrialization and urbanization lending themselves to city living and bohemia, easeful times before the depression’s crash. Of course, easeful for whom, is the question behind King’s juxtaposition of history and present. Who indulged in that glitter and charlestoning as the norm, and at whose expense? In a sequence called “America the Beautiful,” the speaker warns:

sometime in the near future
we drown in the distant past
grinning, it grabs the
shirt of the skittish present

The past’s haunting, like the pain and terror that can inhere in survival, is shown in this collection as haunting truly is; these forces are metaphysical, sure, but they are also plainly physical, and in the present. They are located in the body, which also makes them tractable, moveable. This may be a book about rage, but it is not about helplessness. 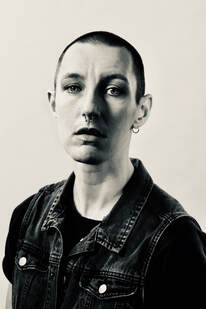 C. Bain is a gender liminal artist based in Brooklyn. His book, Debridement, was a finalist for the Publishing Triangle awards. His writing is published in journals and anthologies such as BOAAT, them., Bedfellows Magazine, PANK, and elsewhere.  His plays have been performed at Dixon Place, The Kraine, and The Tank in NYC. He is a performer, and has worked as an actor with several independent theater companies. He apprentices at Ugly Duckling Presse, and is a Lambda Literary fellow. He works extensively with trauma, embodiment, and sexuality, but he’d rather just dance with you. More at tiresiasprojekt.com