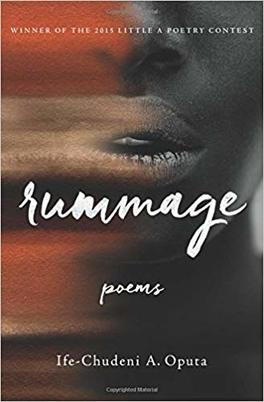 ​“Brave” is a word commonly overused when describing contemporary poetry, but in regards to Ife-Chudeni A. Oputa’s debut collection Rummage, “brave” is an understatement. Rummage is not a book of easy answers. “For me, the poem is not for a space to make arguments or come to definitive answers or full stops,” Oputa told PEN America in a 2017 interview. “For me, the poem is a space for questioning, exploration, and sitting with the unknown.”[i] True to her word, Oputa’s explorations of desire, heartbreak, and trauma do not shy away from the truth for the sake of the speaker or the reader. Rummage challenges readers to create space for a speaker who has wrestled with violence and has not always left the mat blameless.

But in this ugliness, Oputa continually finds grace. “Ode to Shame” and “Kwansaba for my Mother” are particularly stunning for their ability to draw strength and wisdom from some of the speaker’s most debilitating moments. Both the ode and the kwansaba are poems of praise, and in both cases, emerge from events many do not find survivable, much less praiseworthy. In “Ode to Shame,” the speaker asks hsame for forgiveness for all the harm she’s done in its name:

I wanted
to be a weapon, a forest, a city that burns
one hundred degrees and more
​and never turns to ash. (4)

These lines precisely describe the agony of shame and the hunger for self-punishment and vengeance that come with it. In “Ode to Shame,” shame may not be completely expelled or overcome, but by acknowledging the ways we misuse shame to hurt ourselves and others and by refusing to continue to do so, its harm is limited and its lessons are accepted. As the first poem in Rummage, “Ode to Shame” sets up the collection as one ready to work through whatever shame has to offer without letting it consume the speaker.

Sometimes this shame is relinquished, sometime it sits fierce but surmountable at the bottom of the page, sometimes it passes, and other times, it is bonding. A kwansaba is an African American form that celebrates family, written in seven lines with seven words each where no word exceeds seven letters. In “Kwansaba for my Mother,” for example, Oputa describes a moment where the mother’s body is violated in front of the speaker. The title of the poem sets us up to expect a warm, heartfelt poem about the mother, but the body of the poem reverses those expectations and asks the reader, what does it mean to try to find meaning in these moments of harm? If read as a traditional kwansaba—that is, if we attempt to read the poem in search of something to praise or be grateful for—the title would seem to exult the mother for her strength to overcome the harrowing ordeal, and likewise, the last line would seem to celebrate the mother and the speaker for their joint survival. “My heart glows dark with our silence,” the speaker tells us (emphasis mine, 9). The silence here seems to bond the speaker and mother: a secret kept and disclosed with care, a heart that witnesses and burns heavy with its empathy. For many communities of survivors, silence and isolation are shared experiences, ones that Oputa masterfully uses to build spaces of sharing and understanding. Oputa’s work honors the sacrifices and losses too often kept silenced for survival, and in doing so, makes the celebration of survival possible.

Oputa’s kwansaba is in direct conversation with one of the greatest contemporary poets to ever touch the pen: Lucille Clifton. In Clifton’s tenth collection, Mercy, the title poem discusses another sexual assault in terms of mercy, gratitude, and fury with a form as compact as a kwansaba. Oputa’s kwansaba asks us as many difficult questions as Clifton’s short poem.  Oputa gifting the reader with a poem that has the concision, precision, and brutal wisdom of Clifton’s “Mercy” in her debut collection is a testament of her poetic prowess and promise.

The measure of any collection of poetry is its ability to give words to the unsayable. In Rummage, different silences haunt the collection like a web. As if in perfect symmetry, the only other word that seems to appear as frequently as “silence” is “mouth.” Throughout Rummage, the speaker’s mouth violates and is violated. It is the place in which a group of bullies can “disappear” to escape punishment (11). And it is also the vehicle through which some of the power of these violations can be undone. Oputa’s caliber as a poet is proven by her ability to confront these silences and side with the truth, no matter how harrowing.

If to “rummage” means to make a clumsy search through a subject, Oputa’s collection is so carefully knitted that it undercuts the title. Each of its sections are tightly focused, weaving layers of meaning that make the poems remain fresh with each new read. And as if Oputa’s lush language wasn’t enough to hypnotize any reader, the collection also features two long poems (including one cutthroat contrapuntal and something I want to call a quadruple sestina) which could kick the legs out from beneath even the most seasoned poets.

The word “rummage” appears only once throughout the collection. In “Portrait of Memory with Shadow,” the speaker is a collective of seven-year-old girls who take turns straddling and kissing a smaller and reluctant seven-year-old boy, hidden from his mother: “He learned obedience swiftly, / parted his lips and let us rummage” (11). The title of the collection thereby directs us to one of the speaker’s most searing moments of shame and references the way love and sexuality warp throughout the collection.

The second poem of the collection, “We are sitting around discussing our shame,” features another haunting confession of youthful sexual trespass. In this way, Rummage does not feign to be something it is not. After the cathartic “Ode to Shame,” where the speaker provides the reader with a healthier approach to shame, the mettle of this approach is put to the test. By the second poem, you know what sort of collection you are stepping into: a collection brave enough to present shameful acts for discussion in an attempt to overcome them.

Both “Portrait of Memory with Shadow’ and “We are sitting around discussing our shame” fill me with fear. I fear for those harmed by similar violences, and also, I fear for the speaker. Through experience and conversation, I know moments of maladroit sexuality in childhood are not unusual, but at a time where there’s a general expectation for narratives to be ethically seamless, I fear these confessions will be shouted back down into silence, where they will fester and go unaddressed. For me, these two poems were healing, if only for the reminder that I’m not alone in being forced to muddle through similar shades of violence throughout childhood.

I want to live in a world where the forms of shame discussed in Rummage are not silenced, where the confessions of Oputa’s speaker can be met with something other than social death. Throughout the collection, the arc of each gut-dropping section resolves with a form of community, a form of self-knowledge, or another form of care, where the isolation of shame is vanquished, where vulnerability is rewarded with a certain kind of peace. Search and the diligent reader of Rummage will find a “version of you not as loneliness, but better—… a new myth all your own” (53).

After spending three days in the hospital after almost attempting suicide, I did not expect to ever find a piece of writing that could gracefully encompass the extent of the shame and heartache I felt and continue to feel because of my own traumas. Sometime in February, I opened the collection once again on the bus and became so absorbed not only did I miss my stop, by the time I looked up the bus had completed its route and I was back at home again, the book of poems trembling in my hands. In March, I learned one of my most important friends had killed herself. A victim of many of the same violences described in Rummage, I wish I could have shared the collection with her to offer her a small piece of the relief and salvation Rummage gave me. Thank you, Oputa, for giving me a collection to help me work my way through my own pain and forgiveness. Rummage has been my balm, my salve, a buoy for when the storm threatens to drown me.