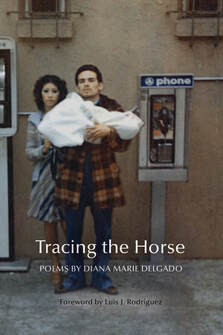 ​ I had the blessing of reading multiple drafts of Tracing the Horse (BOA Editions, September 2019), the debut collection by Californian poet and playwright Diana Marie Delgado. There are few creatures as strong and majestic as horses. One of the most important things I know about horses in the United States, however, is that they belong to people who have way more money than Diana Delgado and me. In Delgado’s work, desire is a horse.

We first see these horses in “The Sea is Farther Than Thought,” a poem that contemplates distance and failure: “As a girl I kept suede horses / and a hairbrush inside a blond toy-box… / I kneeled every time I opened it” (19). The horses here can be read as an escape from the tumultuous environment surrounding the young girl. The girl’s kneeling almost gives the horses a sense of reverence. I also cannot help associating the horses with whiteness because of the color of the toy-box.  In “The Kind of Light I Give Off Isn’t Going to Last,” the horses become a symbol for jealousy when an estranged lover’s girlfriend has horses: “I was jealous. His girlfriend had horses (and what girl doesn’t want to come home and ride horses?)” (36). Given the fact the girlfriend can afford horses, I’m also willing to bet she’s white. Later on, the prose poem “Horses on the Radio” likewise associates horses with troubled gender dynamics in heterosexual romantic relationships (39).

Perhaps the most significant mention of horses in the entire collection, however, comes from the title poem, “Tracing the Horse”: “Maybe Mom’s the horse / because aren’t horses beautiful, / can’t they kill a man if spooked?” (23). Here, the horse signals not only womanly beauty, but also womanly strength and resistance against patriarchal violence. This assortment of horse images suggests that in Tracing the Horse horses can symbolize an idealized womanhood: one that manages to be strong, beautiful, and desirable and also one able to make itself invulnerable to the racism and machismo surrounding it. As the title of this poem and collection suggests, however, the speaker in these poems can only trace this womanhood, never quite making it incarnate.

“I like the lady horses best / how they make it all look easy,” beams Ada Limón in “How to Triumph Like a Girl,” one of the United States’ most beloved poems. Limón’s poem is one of the many examples of what prize-winning Salvadoran writer Alejandro Córdova called US poets’ Beyoncé complex. Our chest-thumping poetics of triumph, our intoxicating performances of survival, and especially our expectations of flawless womanhood. As Córdova and I zigzagged through the streets of San Salvador on his moto, we jabbed about how much we admired and emulated such fiery spunk and clapback. The high of its freedom. To be unbothered, your power undeniable. But survival rarely looks like it does in the Grammys. I listened to Lemonade every day for at least a year, but I lived “Amiga,” one of the short prose poems from Tracing the Horse:

We were in front of Kmart when I called your boyfriend
an asshole for beating you up and you told me if I said
anything bad about him again, you’d never speak to me.

Here, there are no baseball bats against the windshield, no goddess-like vengeance against the men who harmed you—there’s not even a hint of accountability. Neither the vengeance and healing found in Lemonade, nor the ease and swag of Limón’s poem are possible for Delgado’s speaker.

Tracing the Horse is cut with similar snapshots of life in La Puente, California. Throughout the collection, Delgado shows us images of the city’s want: lines where mothers wait with their children for free cheese and butter, dumpsters where cousins are caught smooching, churches where boys have so much light “plants grow towards them” (18). We find traces of her father’s addiction to heroin—another stupefying horse. One of the greatest blessings of this collection is that we as readers get to witness the speaker grow into their own in this sometimes treacherous community. “I’m older / no longer afraid / my voice, water / from a well,” says the speaker near the end of “Bridge Called Water,” a poem that captures the loss in a breaking home (33). In “Lucky You,” Delgado gifts us one of the tenderest love poems, made all the more touching by the men it has survived. In three swift sections, Delgado paints us an alternative model of survival, a sort of coming-of-age story for a young woman who never had the luxury of being young.

One of the most impressive aspects of Tracing the Horse is Delgado’s ability to create moments of intimacy across distance. In “Correspondence,” Delgado gives readers a glimpse at the adolescent snail mail between her and her brother while he was incarcerated: “Remember when the yard froze / white and Mom tied plastic over our shoes?” (54). Here, it is Delgado’s words that serve as the plastic, the fragile barrier between a loved one and the cold. “I hope you get this letter / before lights out… or have you learned to read in the dark?” writes Delgado as a touching signoff to her brother (54). Tracing the Horse is collection for those who—through necessity—learned how to read in the dark, for those who must carve moments of intimacy through the bars of a jail cell or through the walls at the border.

It may be useful to delineate Delgado’s strengths as a poet by comparing her to another woman of color poet of equal strength who writes in similar veins. In When My Brother Was An Aztec, Natalie Diaz draws scorching supernatural imagery of a drug-addled brother, all laden in metaphor and delivered with breathtaking shifts in form and virtuoso. Diaz’s work cuts like a knife. In Tracing the Horse, Delgado does not adorn her language in spectacular metaphor or braided forms; she provides snapshot after snapshot of her neighborhood and its mundane violence in a language cut clean to the bone, the glistening skeleton of a horse. You would have to look far and wide to find another collection published recently as concise, blunt, and evocative as Tracing the Horse. Particularly effective is Delgado’s use of the prose poem for short difficult scenes, where the reader is asked to grapple with the violence ubiquitous in our communities.  Delgado’s work hits like a hammer. When you read Diaz, you are listening to a calculated, dagger-eyed wordsmith. When you read Delgado, you are listening to a homegirl talk to you on her front porch on a summer night with too many moths, holding a near-empty can of cerveza. Delgado’s poetry is a phone call with a friend you have not talked to in over a year, whose voice tells you as much as her story.
​
This is what I admire most about Delgado’s work: her poems have no pretensions. It paints survival in colors I can recognize. There are no fireworks, no epiphanies, no awards for making it through the grisliest years of your life. Delgado knows survival does not make you special. Her collection traces the horses of her youth, the stampedes that trampled many.