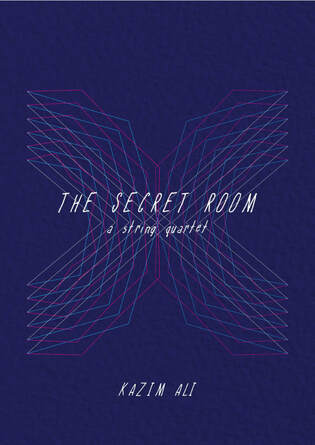 Presented as a novel written as a musical score for a string quartet, The Secret Room by Kazim Ali follows four characters as they navigate a numbing onslaught of longing and frost, death and red lights. Each story is told simultaneously, as if each voice were a different instrument on a musical score. If read as a traditional novel, the reader will alternate between two or more voices in most of the sections. Part contrapuntal, part free-form lyric narrative, the novel may not always read seamlessly in a traditional front-to-back manner, but the poetic connections and tensions make each page erupt with meanings and emotional nuances. The Secret Room is a book I revel returning to because of the deftness with which Ali exploits the potential of this one-of-a-kind form.
​
Take this excerpt from the introductory section of the novel, for example, aptly titled “theme.” The first voice and protagonist of Ali’s novel-in-verse is Sonia Chang. Sonia is a concert violinist, one of those majestically disciplined people who practices for hours, lost in darkening rooms, swallowed within an intimacy unknown to an unfortunate majority of us. Here, Ali provides a glimpse into her devoted practice. The rewards of her dedicated meditation are described in language that evokes both the spiritual and erotic, in the Platonic and carnal senses. If we read Chang’s voice in isolation, it reads like this: 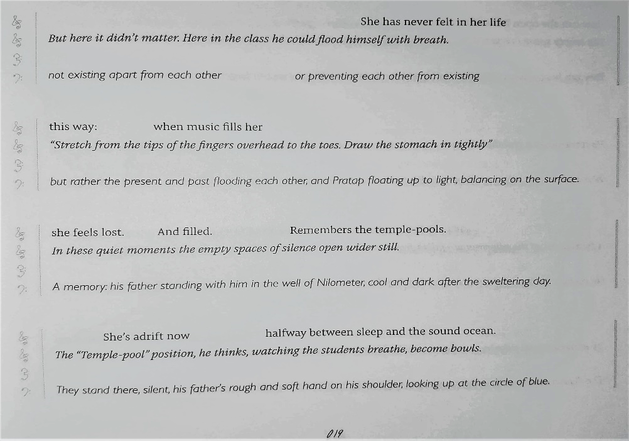 On the page, however, Chang’s story is intertwined with the stories of three other characters, as in this image of page 19. Positioned as the opening notes of Ali’s string quartet, the quoted description of Sonia’s practice serves as a sort of ars poetica to The Secret Room’s biochemistry. Like much music, Ali’s The Secret Room has the power to make you feel lost and full at the same time. Voices interlock and slip away deliriously. Even when you cannot outline the exact shape of the narrative’s geometry, you will feel it. It’s not that Ali’s string quartet lacks structure or obscures itself through imprecision. Each narrative is told clearly on an individual level and combine to create one unified voice. Rather, the experience of shifting from voice-to-voice so swept me away in the swell and tide of the music that the traditional expectations of linear forms and plotlines became subordinate to the demands of lyric and prayer.

I realize this image in isolation can make the novel seem labyrinthine. I confess, I flipped through the first twenty pages of the introductory “theme” five times over: four times following one of the four protagonists in isolation and a final time reading them all together. If this sounds tedious, it wasn’t. First of all, this didn’t amount to much reading because each character only has four lines per page at most. More importantly, however, Ali’s sense of rhythm and tension is so keen it was absolutely captivating. After developing a familiarity for the voice and the narrative conflict of each individual character, it became not only easy to follow if I read them altogether, but magical. In the same image from page 19, for example, Chang’s voice combines with the voices of Rizwan Syed, a yoga instructor. When music makes Chang “[feel] lost. / And filled,” and she “[r]emembers the temple pools,” Syed’s section follows with a resonant description of the practice of yoga: “In these quiet moments the empty spaces of silence open wider still.”  A few lines down, when Chang is “adrift now / halfway between sleep and the sound ocean,” Syed recalls, “the “Temple-pool” position” where “students breathe, become bowls.” Ali has not merely placed four different narratives side-by-side. He has arranged them so they parallel and contradict one another, so sentences almost flow completely into one another.
There is little doubt that this potentially intimidating form has limited The Secret Room’s readership. Of the three scanty reviews online (two of which are less than 120 words and on Goodreads), each points to its formal innovation as a sort of deformity, an experimental fetish “not for everyone,” lauded with five stars but noted as a deterrent. It wounds me to see such painstaking craftsmanship and poetic form dismissed by some readers, as works of literature that marry form and content so masterfully are so rare.

Genre and reception aside, The Secret Room’s value lies not merely in its undeniable technical brilliance, but in the heart of its concerns: each character struggles to create meaning in a life severed from their mother country, spurred by the demands of two, at times diametrically opposed, cultures. With the focus and exertion of a true artist, Sonia Chang prepares for her upcoming concert, “suspended against logic and her fear” (115). Meanwhile, Rizwan Syed, a yoga teacher and aging bachelor, is broken by the death of family members; years of isolation, cultural disconnection, and familial alienation flood in, forcing him to break his personal silences. Jody Merchant, on the other hand, is a social worker whose life beyond the redundant labor of motherhood and her career has come to a halt; like the traffic, it is “nearly unmoving,” as Merchant struggles to rekindle her faded passions (25). Lastly, Pratap Patel grapples with the trauma of losing his younger brother to cancer as a child in India and the paradoxical meaninglessness of his successful life in New York.

Each character must exchange a pound of their souls for survival. Sonia gives up on her dreams of traveling to Kerala and studying South Indian classical music; Jody abandons her name; Rizwan does not speak to his family for years; and Pratap chooses to bear his burdens alone, alienating even his wife. In this way, The Secret Room models and undermines a variety of strategies for healing—from death, from burnout, from migration. Just as Patel begins finding solace in yoga, for example, Syed begins to feel disenchanted with the practice. Ali’s genius lies in the way he shows that each of these fragmented narratives and shattered lives is connected, pulled together and parallel like the strings of a violin. Images from one voice will reappear inverted in another. Characters encounter one another in surprising ways, revealing the intimacy possible within a yoga studio or concert hall, the lightyears between people in the same offices and beds.
​
Ali has one of those voices that can make the most complex compositions feel lucid. And he manages it all while chiseling jaw-dropping lines that can stand alone, no form or narrative necessary. For the past weeks, I have walked around the following line like a sculpture in mind: “At some point in the barely seen seam between noon and Sonia, a bell rings” (68). Readers will undoubtedly feel their own lives braid into the threads of each narrative until there is no seam between them and Jody’s utter devastation. Until there is no seam between the reader and Pratap’s salvation.