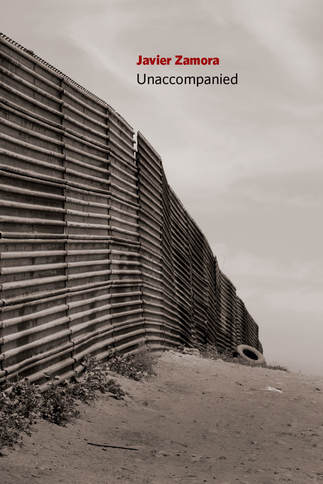 On Tuesday, September 5th, 2017, Copper Canyon Press released Unaccompanied, Javier Zamora’s long-awaited first full-length collection of poetry. Unaccompanied chronicles Zamora’s journey to the US from El Salvador, where he traversed alone as a nine-year-old, and his family’s experience with war and migration. On the exact same day, Attorney General Jeff Sessions announced the elimination of the DACA program, an executive order that gave 800,000 young undocumented immigrants like Zamora the ability to work, drive legally, and live with a less imminent fear of deportation. United We Dream, a national youth-led immigrants’ rights organization, has framed the elimination of DACA as a plan for mass deportation.

I am writing this review in between texting two undocumented students worried about losing over 10k worth of scholarships through no fault of their own. I am writing this review after returning from El Salvador for the first time in five years, a gigantic privilege that has put my finger on the pulse of many of the traumas still afflicting my family. I cannot imagine the confusing concoction of emotion Zamora may have felt that Tuesday—the culmination and celebration of years’ worth of work put into his collection of poetry, and the jarring reminder that there is a team of powerful white supremacists constantly scheming to make life more humiliating and insufferable for immigrants in this country. The alignment of the publication of Unaccompanied and the elimination of DACA is so fucked up it feels divine. There could not be a clearer sign from God that Javier Zamora is the poet chosen to do this work of taking immigrant narratives back from the hands of white supremacists. Understand, Zamora is one of a small handful of Salvadoran writers represented in US literary circles. He is the only major currently undocumented Salvadoran poet in the United States.

“Today, this country / chose its first black president,” the poet states in “To Abuelita Neli,” the first poem in Unaccompanied. “Maybe he changes things.” In the era of Trump, it is impossible to utter those words without an overwhelming sense of futility. We all already know how this collection ends: “nothing has changed,” he tells us. He didn’t get papers, Obama deported more immigrants than any other president in history, and gangsters and police officers still blow one another’s brains out like birthday candles on the streets of Salvador.

Yet I would be terribly amiss to declare the tone of this collection fatalistic. Perhaps the spirit of Unaccompanied is best encapsulated by the poem printed on the back of the collection, “Let Me Try Again.” “I could bore you with the sunset, the way water tasted / after so many days without it,” Zamora tells us in the voice of someone who has heard this story, who has told this story too many times. Gone are any attempts to sentimentalize the experiences of immigrants as something extraordinary. Gone are any attempts to dissect the complexity of the experience into something consumable for citizens, into something legislators can politicize, into anything with a falsely happy ending to comfort those unwilling to look truth in the eye.

The best word I have to describe the emotional relentlessness of the collection, and the unwillingness of its characters to surrender against the most absurd odds, is faith—a word wholly inadequate and inappropriate for its religious baggage and sentimentalism. But we need a word for those who risk everything, who almost die attempting to cross the border numerous times, yet “try again / and again, / like everyone does.” We need a word for the fathers who “still [carry] unopened water bottles,” for the tias who keep “looking at stranger’s left feet / to see if the big toe and the two next to that are missing” in the infinitesimal chance they find their long-lost brother, disappeared by the military decades past. This faith need not come with romanticized illusions of what could be; it need not come with dramatic posturing in the face of oppression. It merely comes with the understanding that come what may, our communities will keep trudging forward, will keep trying, like we always have. As Hanif Abdurraqib would say, they can’t kill us until they kill us.

“To Abuelita Neli” brings to focus a question I hope everyone brings with them as they enter poetry collections: “who is this written for?” The first poems of a collection set the tone and expectations for the rest of the book, and in “To Abuelita Neli,” Zamora gives the reader the uncanny feeling of eavesdropping on someone else’s family business, in the College Dropout sense of the word. As the Acknowledgments, written in Spanish, make clear: Unaccompanied is primarily intended for Zamora’s family. Months ago, Zamora confided to me and others that now that the book is out there, he is unsure how comfortable he is sharing such intimate experiences with certain audiences, and I understand what he means. Such experiences are usually only shared behind closed doors. There’s the risk of exposing yourself to those who may be consuming your experience voyeuristically, who see you at most as an artistic object and not a human being, especially as a marginalized writer.

“To Abuelita Neli,” on the other hand, is paralleled a few pages later with the one and only other direct address poem in Unaccompanied, this time “To the President Elect.” Unaccompanied inevitably hovers somewhere within the complicated space between the private and the political. Elsewhere, Zamora tells us, “Whatever you do, / don’t judge my home,” keeping one eye on those who would misread his work, on those who would reduce El Salvador to nothing but a war-torn third-world ghetto. Zamora wraps up “To Abuelita Neli” in one of the boldest ways possible, immediately putting his doubters in their place in the closing lines, where he states,

my old friends think that now I’m from some town
between this bay and our estero. And that I’m a coconut:
brown on the outside, white inside. Abuelita, please
forgive me, but tell them, they don’t know shit.

Javier Zamora navigates his audiences expertly, strategically putting up barriers against outsiders, while at the same time sharing some of the most intimate moments of his life. In the third poem of the collection, “from The Book I Made with a Counselor the First Week of School,” Zamora’s parents tell him, “always look gringos in the eyes” and “never tell them everything, but smile, always smile” (8). Stylistically, this collection will always look you in the eye. It will craft a scene for you in careful, plainspoken language, but it will not spell out its truth for you. If you are unaware of the intimate details of migration or of El Salvador’s history and culture, there are certain passages that might take a little research to unpack.

Read “Cassette Tapes,” for example, a poem with an A side and a B side that >>’s forward and <<’s back in a timeline of Zamora’s migration experience and explores the ways distance has strained relationships with family. In the poem, the poet narrates his experiences in a straightforward, easy-to-access fashion: he looks you in the eye. The form of the poem, however, probably doesn’t mean much to you unless you know that family members in the United States sent cassette tapes to their loved ones back in El Salvador. Zamora explains it best himself in an interview with Granta.[1]

The truth is, I don’t know what it would mean to read Unaccompanied as a reader who does not have any undocumented family. My own family history complicates my reading. Certain poems nuzzle up to me fondly, while others attack me. For me, the form of “Cassette Tapes” reminds me of the video tape Mama made for Abuelita when we were children. Mama wore her best clothes, and we set up the camera for her, so Abuela could see how well she was doing, and so she could simply see her after almost a decade of distance between them. Now that Abuela is dead, this tape is one of the few mementos we have of our relationship with my Abuela. Despite the trauma in the poem, the form evokes longing and warmth.

The fourth section of the last poem, “June 10, 1999,” named after the date Zamora arrived to the United States, is a poem I cannot touch without the fire of my own family baggage coming to get me. In it, Zamora confronts his parents for not knowing how difficult his migration to the United States would be:

she says Coyote said,
I’ll carry him to your front door myself Pati
she didn’t know 110 degrees
when like Colorado River toads
we slid under bushes.

Zamora forgives his mother in the last lines of this section, saying, “you couldn’t have known this would happen / Mom / you couldn’t have / no es su culpa / no lo es.” After my first time reading this poem, I was ripped open with rage. “You should have known!” I cried from the hurt, protective part of my psyche. “You should never send across a child without an older family member to protect them,” I cried helplessly, knowing full-well crossing the border is always a crapshoot, and how much you suffer has barely anything to do with how much money you spend or how “trusted” the coyote is. Some pay thousands more and get robbed. Some pay thousands less and get across with few issues. Here, I put Unaccompanied down and did the complicated work of processing and forgiving. Immigrant families so often have only the worst options to choose from, yet we still harbor so much blame, guilt, and bitterness towards those who did everything they could to love us right.
​
And this is the most important work Zamora’s collection makes possible: his poems bring to light and give voice to the experiences of Central American immigrants too often kept silenced in the shadows. By finding the language to describe the hardships of the Salvadoran Civil War, the nightmares of migration that seem to plague all Salvadorans, Zamora has begun the process of healing deep emotional scars –the barbwire crosshatched across our souls, the thirst no water could calm. We can begin to process what it means to grow up in a family shaped by war. We can begin to understand the reasons our parents migrated North. We can begin to forgive our family for all ways they have failed us. And so, begin again.