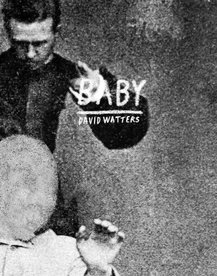 ​In Baby, the second chapbook of David Watters, dedicated to his son Liam, the poet tackles the complexities of single fatherhood in plainspoken metaphors that are at once crystal clear and full of mystery—like water spilling from a rock. If the book feels as if it pulsates with warmth, as if its seam is made of blood and veins, that’s because it is. Off the page, Watters’ mark as a father transcends poetry and is written on his son. I have had the joy of experiencing Liam’s company on occasion at pizza shops or after poetry readings, where Liam and I sometimes tease and playfight one another. “Do you want to be a vampire or a werewolf?” I once asked, playfully baring my teeth and growling. Liam, four-years-old, responded with a sincerity astonishing for a child with such an active imagination: “I want to be human.” At an age where most children leap to embody the fantastical and the animal, Liam’s self-possession in that moment was strikingly rare. Among adults, such self-possession is probably rarer, except in brief moments, especially in our consumer culture, where we all seem to be hankering for one dream or another, where we are defined by what we have managed to possess. I know I rarely feel a similar self-possession. “I want to be a werewolf,” I told Liam, howling, and we proceeded to chase each other around the room, wild-eyed and giggly.

Liam’s response, however, was fitting for the child of white Hoosier poet David Watters. In Baby, the poems bristle open with a love for life, an acceptance and gratitude for even the most devastating experiences life has to offer, a self-possession that is hard-earned and enviable for its ability to find beauty in the most difficult moments. Watters has managed to write a book of poems about his son, without a trace of sentimentalism, parenting clichés, or all-too-familiar fatherly advice. The opening stanza of the collection encapsulates these points well. It is written after the following anonymous epigraph: “The first cigarette in the morning / Is as good as it gets.” In response, Watters tells us,

Baby, whoever wrote that line
Must have never felt
An early spring thunderstorm
In southern Indiana.
The way limestone can wake
With the taste of salt in its mouth
As the creeks and rivers rise
From their banks.
Like so many ghosts speaking,
They upturn and spin limbs,
Car tires, dumpsters,
And yes, even backhoes
Can be swept away
In the sudden joy and rush
Of water.

If you’ve ever been to Indiana, then you know its thunderstorms can be frightening. Lightning cracks and trembles buildings. The rain shrieks in the streets. Sometimes, tornado sirens go off, so you decide to huddle in your bathtub with candles lit, half-annoyed, half-amused, with a dash of fear pulsating through the ritual. Yet this stanza transforms the at times terrifying rain with an ecstatic and ravishing joy. The agency given to the water, rising and upturning and speaking like ghosts, gives this scene a mythic quality, reminiscent of the Popol Vuh. The thunderstorm, the river are a force that overthrow human waste and reclaims the land in rebirth. And Watters offers us all of this magic in sleek, lucid lines comprised of language that is richly complex yet could be understood by a child.

Throughout the collection, Watters offers a complex window into fatherhood, moving beyond both pain and joy to uncover emotions we don’t even have words for yet. In “The Difference,” Watters writes,

​There have been a handful of times
I have felt like a kidnapper,
So that tonight Baby, I’m afraid someone
May call the cops on me.
Imagine me trying to explain,
That yes, I am the father,
Everything is alright,
​You’re just tired.

I see a buck with half his face
Torn off. Jawbone and teeth.
He’s exposed himself enough
For all the world to look and see.

I think, maybe, I should call the cops
That somebody ought to put him
Out of his misery, but just before
I reach for my phone I realize
I can’t tell the difference between us
So instead, I follow him to a place
I don’t yet know
.
The buck—vulnerable, exposed, and somehow still living—is juxtaposed against the writer himself, an exhausted father, coping with what some might call an imposter syndrome that makes him feel like a kidnapper. Both are vulnerable and exposed.  Both can be said to be miserable. Here, however, Watters rejects the desire to surrender to misery to follow the buck elsewhere, like in those moments where you are so tired, so overwhelmed, everything, even your weariness, vanishes. If any of the poems in Baby can be called an ars poetica for the collection, it is this one, where the writer willingly follows the image, the emotion to take us to a place yet to be named.

In “War Games,” Watters depicts the difficulty of trying to raise a child in a growlingly violent world. In an attempt to get Liam to stop playing with toy guns, Watters uses a litany to lament the destruction of entire communities and ancient monuments razed by recent acts of war. This litany is both tragic and self-indulgent. Tragic because it describes with moving lyricism the many monuments and religious wonders destroyed, a loss almost impossible to communicate to a child. It’s self-indulgent because it attempts to place the weight of the world’s ills on a child’s shoulders. In the last stanza, Watters describes how Liam “turns, / points his thumb and small finger / At my head, smiles, / Says, bang, you’re dead.” This moment reads as both a betrayal and not. Betrayal because the poet must confront the violence in the defiant child, who will ultimately evolve into the person he chooses to be, regardless of the wishes of the father. At the same time, it’s not at all betrayal because that’s way too heavy of a word to use on a kid who is just playing a game. Here, Liam offers us another lesson in coping with the madness of the world: to get out of our heads and be present for one another, for the humor and playfulness we have to offer.

I want to end this book review with a short anecdote. The day after Trump’s election, I taught a class on political hip hop alongside Adrian Matejka to a class of mostly white students in Indiana. It was an exhausting class. Everyone in the room realized that the migrants who Immortal Technique and Blue Scholars were fighting to humanize would soon again be under attack by a racist administration. Afterwards, Matejka invited me to his office to show me pictures of a children’s book he was working on. For more than an hour, he told me about his process, sharing pictures from his model storybooks, as we discussed the importance and the scarcity of depictions of brown and black fathers playing with their children in literature. In a time of panic and despair, Matejka slowed me down to remind me of the gifts of wonder and childhood, the relationships and moments that will matter most to us, and which we must fight to keep sacred in our lives. And with this stumbling conclusion, I want to leave readers with Baby. Baby is not the book of poetry that will redefine our nation; it is not the book that will burn the flag or outmode contemporary styles and forms. But it is the one that will remind us of the greatest joys and wonders of being human; it will hold your hand, remind you to pause, and make you cry hallelujah for your life. Baby is a book we desperately need.
June 2017