Fighting & Loving the Silence: As She Appears by Shelly Wong
Reviewed by Benjamin Grimes 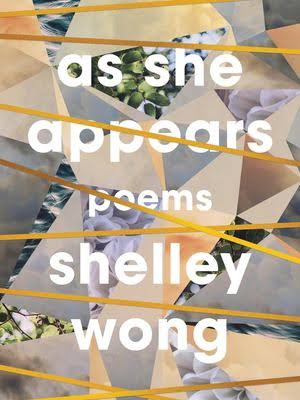 At first glance, Untitled (Ocean) by artist Vija Celmins appears to be a photograph: endless waves, captured in hypnotic black and white. Yet this is no gelatin silver print — amazingly, it’s a drawing, rendered in graphite pencil from a photograph Celmins took near her home in LA. Celmins’s process, meticulously duplicating what is already a duplicate, emphasizes the distance between subject and viewer, and raises questions about the nature of representation. What is made new in this act of re-rendering? What is lost?
As if to further underscore these questions, the speaker walking the museum halls of “Private Collection,” the second poem in Shelley Wong’s As She Appears, points not to Untitled (Ocean) but to its absence: “At the San Francisco Museum of Modern Art / the ocean drawn in pencil is no longer / on display.” A brilliant moment of apophasis — the representation of the representation is missing! Thus are readers introduced to the themes and struggles of Wong’s debut, wandering the museum with the speaker and her partner, where the two “walked gallery to gallery / & no women resembled us.” From museums to beaches to doctors’ offices on both coasts, Wong depicts a search for self despite the absence of representation, a fight to create space for one’s experience within and against a country that would deny the identity of a queer, Chinese-American woman.
The collection proceeds from a literal, looming absence, as the speaker explains in the third poem, “Department of the Interior”: “I have come to this / barrier island again, in the silence that follows / a separation.” This is a relationship’s aftermath, the encountering alone what one had known with another, where each familiar place is made new in the grieving. The speaker returns over and over to the same locales, among them Fire Island, NY — the fittingly poetic and tragic site where, as readers learn in a later poem, Frank O’Hara “wander[ed] / and [fell] asleep on the beach,” leading to his death. Each return uncovers questions, silences, small moments, the speaker dwelling “in a maritime forest away from the seductions / Recording the tide’s hiss, water lapping, a catbird wheezing.” In one of the collection’s two sonnets, the speaker confesses, “I am in a floating year.”
These somber moments offer more than grief and solitude, however. In the gorgeous apostrophe “To Yellow,” Wong writes:

I am still learning to hold

certain illuminations, like how quiet
is strong & often beautiful.

No longer green, I write you
to learn your minor keys. My people

are rising. We are the new names,
the ones we have always known.


As the collection unfolds, the speaker discovers strength and possibility in her independence, often through engagement with the natural world. Each poem exhibits a strong sense of place; oceans, animals, flowers, and trees abound. Exalting a white peacock in “Albino” leads to a quiet revelation:

Look at me, he blooms, pivoting
to display his beating wings.
In the end, I will say
that I, too, worshipped beauty,
parading in my pastels.
I fought & loved the silences.

The tide is another recurring theme, a place where the spiritual and emotional connection to the earth converges with the physical. “The tide calls the water / of the body,” begins “Department of the Interior,” while later, in the opening of “The Ocean Will Take Us One Day,” the speaker reveals, “My first memory // is when the tide pulled me // into its room.”
These passages make clear a powerful womanhood at the core of As She Appears, one that runs from the title to the final poem, in which the speaker declares herself “a pastel queen.” Perhaps a reader might be tempted toward a simple interpretation, the common stereotype that links women to nature (usually leading to subjugation of both). And yet, a spirited critique of patriarchal U.S. culture lives between, and often in, Wong’s lines. “The Ocean Will Take Us One Day,” after moving from the supermoon to the tide to the DAPL protests, ends with these biting and beautiful lines:

drift toward one another

& repel, like soldiers. Rapture, yes
I’ve felt that, too. Who will stop a man

from having his way? Breathless, a woman

rests her head on her longtime companion
as they listen to the waves.

What line breaks! The surprising appearance of “soldiers” underscores the danger and violence in the speaker’s question, and the enjambment creates a powerful answer: “a woman.” Though she is “breathless,” she knows “rapture” too, insisting on the connection to herself, her “companion,” and her world, through which she finds the strength to “stop a man / from having his way.”
For all their quiet scenes, Wong’s poems are often active on the page. The reader encounters rolling stanzas, skittery indentations, a speaker hopping from couplet to monostich. Even working in straight couplets, as in many of these poems, Wong’s keen sense of line and rhythm allow for much variability and surprise. The long lines and first three closed couplets of “Perennials” create a steady pace, which continues even as the enjambment begins to resist the form:

Years ago, we lived on a city island where she could
barely breathe because the Norway maple trees

cast their pollen like ticker tape & we
wanted to keep the cats. Freely, she spoke,

being proudly out, while I feared cruelty
& broke my meaning. How dazzling when trees

The stability offered in the longer lines is lost with each break as the sentences overflow their lines and stanzas, evoking the disorientation of the speaker’s post-separation pain. Elsewhere, as in “Winter Pineapple with Sea,” the energy of shorter lines gives the reader a sense of falling through the couplets (and, in this poem, mirroring the content):

How the season holds,
rippling arpeggios

while I play
a spectator,

a flash of gold,
a ship dropped

in a stilled sea.

With only a few syllables to find their footing, the reader tumbles headlong with the speaker into the sea — the spondees sounding soft splashes in the last two lines. Finding a similar energy in the varied lines and indentations of “Courtship,” Wong uncovers a bit of humor as the speaker commands, “Don’t tell me what’s unbecoming / for a woman: I was raised on magazines.”
One of the many joys of Wong’s work is the way she maps her poetic and artistic lineage. Her kinship with Frank O’Hara is less about a shared poetics, and more about the way both poets turn to the world of museums and fine arts for inspiration. Throughout As She Appears, Wong engages paintings, video installations, performance art pieces, music, and fashion. The latter provides a structural pattern to the collection, as each of the four sections closes with a meditation on the season — through the conceit of its upcoming fashion line. Ending the first section, for example, “The Summer Forecast” asks “Is it too late to go off- / the-shoulder?” before the speaker offers, “I wore a long, striped dress, / a sailor ashore // longing to be / a natural wonder.”
​        Though this wide range of influences may be the product of a healthy cultural appetite, Wong remains suspect of institutions serving up the so-called canon. Like her speaker wandering the MOMA in “Private Collection,” she is interested in what — and who — isn’t there. With As She Appears, like the title suggests, Wong both invents and bears witness to a new space, a new possibility of self in a world both hostile and joyous, and always opening to new ways of being and becoming.
Benjamin Grimes earned his MFA from Randolph College, where he worked on the literary magazine Revolute. He writes poems and letters from his home in western Massachusetts. Recently, his work was published in New Ohio Review and he was named a finalist in the Sewanee Review Poetry contest.
Fall 2020